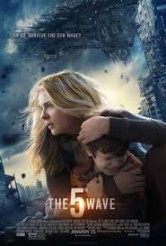 A YA science-fiction actioner that moves well at first 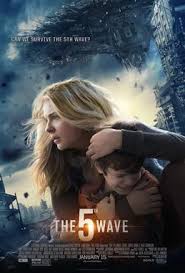 One wants to judge a movie entirely on its own merits, but THE 5TH WAVE does appear to be the latest contestant in Hollywood’s own Hunger Games, trying to replicate the success of a certain other young adult science-fiction/action franchise. This said, THE 5TH WAVE has the benefits of moving at a fast clip and of starring Chloe Grace Moretz.

Moretz plays Cassie Sullivan, a high school senior who has a reasonably happy life with Mom (Maggie Siff), Dad (Ron Livingston) and beloved little brother Sam (Zackary Arthur) when Earth is invaded by the Others. Per the title, the attacks come in waves. The first few wipe out most of the human population. Cassie, Sam and Dad are among the survivors, but when the Army arrives, Cassie and Sam are separated, leaving our heroine to go in search of her younger sibling.

Cassie is eventually aided by the mysterious Evan Walker (Alex Roe), a young man hiding out in his now-dead family’s luxurious farmhouse in the woods. Meanwhile, Sam winds up on a military base commanded by Col. Vosch (Liev Schreiber), who warns that a fifth wave is coming and every survivor, no matter how young, is needed to take back the planet. Carrie’s high school crush Ben (Nick Robinson) is put in charge of an infantry squad consisting of kids, including Sam.

THE 5TH WAVE both does and does not feel familiar. Director J Blakeson and the screenplay by Susannah Grant and Akiva Goldsman & Jeff Pinkner, based on Rick Yancey’s novel, do a great job of keeping things propulsive yet coherent for the great majority of the film, and Moretz is a compelling young actress.

However, once the story bifurcates – we wind up cutting between Carrie and the activities on the military base – the pace starts to slow a little. There are character-establishing moments that are clearly necessary, yet feel a bit rote, and as though they are included less to serve the film that we’re watching and more to set up a sequel. Also, without getting overly spoilery, there are aspects of how we see what we see and how certain people behave that cause us to wonder for awhile whether mistakes we see being made are those of the characters or of the filmmakers. It turns out that the filmmakers are serving the story, but they’re doing it in a way that tips their hand a bit too much. Then again, it may be that those who have taken in enough offerings in this genre will readily pick up on clues that are meant to be twists. The finale feels rushed, as though the movie has run out of time to let anything breathe.

This said, THE 5TH WAVE is reasonably entertaining and it has something on its mind that is more nuanced than we might expect. Indeed, it’s got enough going for it that we wish it could have been just a little deeper and subtler.