The scoop on the new PBS' new series 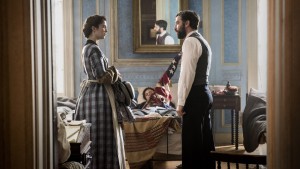 MERCY STREET is PBS’ first original drama series in over a decade to be set in America. Now in its six-episode first season on Sunday nights, MERCY STREET is set during the Civil War in a hotel, owned by a Confederate family that refuses to leave, even after the building has been commandeered and made into a military hospital by the Union Army. Mary Elizabeth Winstead, Josh Radnor, Hannah James, McKinley Belcher III, Gary Cole, Donna Murphy, AnnaSophia Robb, Shalita Grant and Norbert Leo Butz are among the leads in the large ensemble cast.

As of publication time, PBS wouldn’t say for certain that MERCY STREET will be picked up for a second season, but executive Paula Kerger announced at the winter Television Critics Association press tour that the series premiere had garnered better overnight ratings than even the Season 3 SHERLOCK premiere.

David Zabel and Lisa Wolfinger created MERCY STREET together. Zabel has a lot of experience with contemporary medical series, having written and/or produced 150 episodes of E.R. His other credits include STAR TREK: VOYAGER, DARK ANGEL and DETROIT 1-8-7.

ASSIGNMENT X: When did MERCY STREET come together as a project?

DAVID ZABEL: It started three-and-a-half years ago when Lisa Wolfinger and I were introduced by a mutual friend and started doing a PBS series that would track the advances made in medicine during the war.

AX: Did your background as a producer and writer on E.R. come in handy?

ZABEL: That was one of the reasons [Wolfinger] was introduced to me. She wanted to find a way to tell medical stories that had dramatic impact, she wanted to make sure that it wasn’t too dry. So my initial involvement was really just advising her on how to build some stories that would have medical information, but not become just purely informative.

AX: When did you become more involved in the process?

ZABEL: It was a gradual thing. PBS, I think because they were having some success with other shows, really started to have an appetite for a great American show that would be of their own creation, as opposed to buying acquisitions from England, of the high caliber that they have been, like DOWNTON ABBEY and SHERLOCK and others. So, as PBS expressed interest in a real dramatic series and that was where I come from and my forte, the ball started rolling and kept going.

AX: Are there any aspects of medicine that have not advanced in medicine since the Civil War?

ZABEL: [laughs] That’s a hard one. No, I think there’s probably nothing that hasn’t advanced at all in some way.

AX: Are there any big discoveries in the show that the audience is going to go, “Ah, so that’s where that comes from”?

ZABEL: Oh, yes, I hope there will be – I think there will be something like that. I don’t want to give them away, but there are a few sort of “Aha!” moments where it’s almost Sherlockian, the moment where you reveal, oh, it’s the first time they’re doing this.

AX: MERCY STREET is based on real events – the hotel-turned-hospital was real – and you have a mixture of real historical characters and created characters. Are the characters who are real, historical people ones that you and Lisa Wolfinger particularly wanted to tell the stories of?

ZABEL: No, it just started because we liked, as the nexus of the show, the hotel that’s turned into the hospital, so we went from there, and we found Mary Phinney was a nurse who was sent by Dorothea Dix to that hospital and the Green family, which owned the hotel. So it was very organic in that sense. We just thought it was a great location to cross all of these stories, and then from there, we looked at the real people and progressed.

AX: You’ve got Donna Murphy and Norbert Leo Butz in your cast. They’re both Tony-winning musical performers. Are you and/or the other producers big Broadway fans?

ZABEL: A bunch of us are. David Zucker and myself and Lisa are all theatre fans, so we’re huge fans of Norbert and Donna from their many years of theatre, as well as Cherry Jones, who plays Dorothea. So those are all great theatre actors and we were thrilled to get them on the show.

AX: Is there going to be a big musical episode?

AX: What did you learn that was the most interesting to you in the course of researching/making MERCY STREET?

ZABEL: Hmm. I don’t know. That’s a tough one. I learned a lot, because I dove into so much research on the war and different aspects of the war. There were so many things medically that were really fascinating. To me, it’s fundamental that this was the beginning of the use of hypodermic needles to administer drugs. That’s really fascinating to me, and that they were figuring out that that’s something you could do that would work better.

ZABEL: Gangrene for sure. So many of these wounds ended up having gangrene. That was another thing that was shocking to me, that there’s a thing called hospital gangrene that can spread on your body an inch an hour, which is why it became so urgent to do amputations before the gangrene had spread. So that was pretty shocking and fascinating to me. I didn’t know that much about gangrene.

AX: As far as dealing with PBS, do they deal with you the way a broadcast network does?

ZABEL: Much better. They’re much better than a normal network. They’re very supportive, they’re very smart, they’re very collaborative and it’s a much more open conversation. It’s been a really thrilling experience with PBS and quite different than what I’ve been used to.

ZABEL: Not right now. I’m hoping to get a second season of this going.

AX: What would you most like people to know about MERCY STREET?

ZABEL: That it’s a Civil War show unlike any Civil War show they’ve seen before, and that it’s a different way into probably the most crucial moment in American history that we’ve had, and that a lot of what is going on in the show is still part of what we wrestle with every day today in this country.