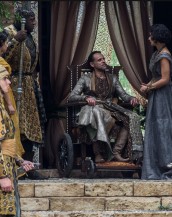 Off to a splendid start 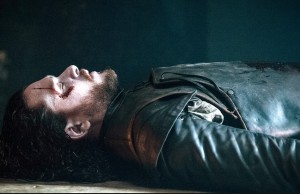 To answer the big question that has zipped through the Internet since the end of GAME OF THRONES Season 5, yes, Jon Snow (Kit Harington) is really dead. And if he stays that way, this reviewer will eat the Wall at Castle Black.

The premiere episode of GAME OF THRONES Season 6, “The Red Woman,” has Harington’s Jon lying in a room in Castle Black for so long , with so much made of sorceress Melisandre (Carice Van Houten) having seen visions of him leading an army, that it makes no sense otherwise in meta terms. If we were meant to simply understand Jon’s corpse was there, we’d get a shot establishing the presence of the corpse, not whole sequences where we see Jon as much as we see all of the currently living characters.

Among these are the heroic Davos Seaworth (Liam Cunningham), who is holed up in a room at Castle Black, holed up in a room with the door barred while trying to figure out a way to get himself and Jon’s few loyalists out alive, Jon’s friend Eddison Tollett (Ben Crompton), the much-subdued Melisandre, and Jon’s direwolf Ghost, who had been penned up by the Night’s Watch (which explains why Ghost didn’t come to Jon’s rescue). Allister Thorne (Owen Teale), now leader of the Night’s Watch, promises Davos and the others safe passage if they’ll just accept the new regime at the Wall. Since this new regime consists of Jon’s assassins, this is quite rightly thought to be nonsense, but how to get out of this situation? Hmm …

In King’s Landing, Cersei Lannister (Lena Headey) and Jaime (Nicolaj Coster-Waldau) have a sad reunion, with Jaime bringing home the corpse of their murdered daughter Myrcella. In comforting his sister/lover, Jaime seems to be turning to the dark side, vowing vengeance on everyone who isn’t them (or, presumably, their third and only surviving child, King Tommen).

In Dorne, Illyria Sand (Indira Varma) assassinates ruler Doran Martell (Alexander Siddig), while her daughters kill his son Trystane, effectively taking over the kingdom as they declare war on the Lannisters, all in the name of avenging the death of Oberyn Martell, who would have deplored the whole business.

In the North, Sansa Stark (Sophie Turner) and Theon (Alfie Allen) run from the Boltons’ trackers. Theon tries to save Sansa by giving himself up, but both wind up cornered. However, before they can be killed, rescue arrives from the wholly unexpected quarter of Brienne of Tarth (Gwendoline Christine) and her squire Podrick (Daniel Portman). After having made this her quest for most of the series, Brienne finally gets to pledge herself to one of Catelyn Stark’s daughters, and Sansa at last gets some decent protection.

Across the Narrow Sea, Daenerys (Emilia Clarke) is in the hands of Khal Moro (Joseph Nauhafu). She saves herself from rape by explaining that she is the widow of Khal Drogo – it’s forbidden to attack the widow of a Khal – but tradition decrees that Daenerys now be confined to the rest of her life in the city inhabited by Khaleesis whose husbands have died.

In Meereen, Tyrion Lannister (Peter Dinklage) and Varys (Conleth Hill) try to figure out how to prevent all-out rebellion in Daenerys’ absence.

Arya Stark (Maisie Williams), still blind and now forced to beg, is also being made to continue to train as a fighter by the Waif (Faye Marsay) from the House of Black and White.

Given that the episode is named for her, Melisandre doesn’t do all that much in herself, except be surrounded by invisible throbbing arrows pointing to her as the source of Jon’s resurrection in some form. We have seen that priests of the God of Light can bring people back from the dead repeatedly (witness Beric Dondarrion in previous seasons), even though they may not be happy about it.

Brienne’s sudden entrance – with everything else going on, we were led to forget about her – is as triumphant and wonderful as any in the series. The character is far too honorable to survive the whole show, but she’s always a delight to watch, and Christie plays her with superb commitment. It’s also fun to Podrick rise to the occasion, and gratifying to see Sansa catch a break. It’s annoying to see Theon be treated so sympathetically, as he killed two children (yes, Jaime threw Bran Stark out a window, but it seems like he had a longer path to quasi-redemption), but, well, this is GAME OF THRONES.

It’s hard to be too worried for Daenerys, as unless the city is underground, she has at least one dragon that can fly to her rescue. It is a pleasure as always to see Daenerys put her would-be destroyers in their places, and there’s a bit of nostalgia in returning to the Dothraki for awhile.

Since the big picture has got to be coming together, it’s also intriguing to try to puzzle out how all the pieces fit together, though right now it’s hard to imagine how the coming clash between King’s Landing and Dorne is going to impact the invasion of the White Walkers, and how the storylines in Westeros and Essos will ever come together.

The answers are part of why we’re watching, but only part. The spectacle is breathtaking, the actors are terrific and, now that the storyline has overtaken George R.R. Martin’s source material in the novels, the suspense even for readers is delicious. GAME on indeed.