Home » bones Review The Murder in the Meninist Season 11 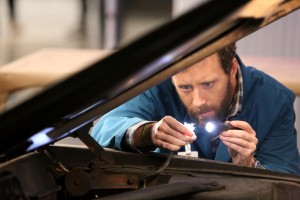 The men’s rights movement, should you not have heard of it, is an actual social cause, arguing that heterosexual (and usually white) men are being discriminated against. The BONES Season 11 episode “The Murder of the Meninist” takes exception to this notion, while still finding examples of a couple of areas where men might actually benefit from gender equality.

When a dead body is found in a car fire after the vehicle has crashed and burned, Booth (David Boreanaz) and the Jeffersonian team are called in to investigate. Despite the fact that Hodgins (TJ Thyne) is being extremely prickly on account of his new disability, it is determined that this is murder rather than an accident. Once the victim is identified as Emil Bradford, it’s learned that he is a co-founder of Men Now, a men’s rights organization. Emil and his co-founder, Paul Walters (David Shatraw), have been prone to proclamations accusing feminists of wanting to abolish males altogether and throwing the word “slut” around quite a lot.

At one point in the investigation, when Walters says that Brennan (Emily Deschanel) should be “muzzled,” Booth looks ready to deck him. Brennan first cautions Booth that he could be fired if he hits a civilian, then punches Walters herself. Brennan points out that as a civilian consultant, she can only be disciplined, not fired, for this action.

Much as Brennan and Booth would like to arrest Walters on the grounds that he’s an epic jerk, he is not the murderer. The culprits are the victim’s abusive ex-wife – she was a batterer, turning expectations of sexual abuse around – and her house-repairing boyfriend.

The topic of sexual stereotyping gets a fair workout here, with intern Dr. Rodolfo Fuentes (Ignacio Serricchio) making remarks that are good-natured but indicative of a sexist mindset. However, it turns out that everyone has a preconceived notion or two that gets questioned along the way here.

The secondary plot revolves around Hodgins’ (TJ Thyne) growing rage at his disability and at the good intentions of everyone around him. He is particularly hard on his wife Angela (Michaela Conlin) – when she tells Hodgins to stop snarling at her, he warns that it’s just going to get worse, and if she can’t take it, she should leave. Thyne, normally called upon in BONES to be cheerful and quirky, is excellent in depicting bone-deep fury and misery.

The C story finds Booth afraid that having Brennan watch Philly Flyers games with him is somehow jinxing his beloved team. Brennan finds the whole idea of a jinx preposterous, but she gamely looks into superstitions and tries to follow traditions that bring good luck.

There are a couple of whoppers that must be overlooked to get into the story on any level, starting with the idea that the FBI and the Jeffersonian would be brought in to investigate what, at the time, is seen as an ordinary car accident. Granted, BONES routinely stretches the parameters of FBI involvement, but it seems like, at minimum, the authorities ought to agree that it seems like a crime has been committed before calling in the Federal government. Then there’s Brennan’s cheerful assumption that nothing too terrible will happen to her for hitting a witness in custody while she’s part of the interrogation team.

On the flip side, the episode is pretty good about noting that more even-handed views about child custody and the armed services could benefit both genders, even as it castigates sexism, prejudice and deceptive practices. “The Murder of the Meninist” isn’t meant as a searing intellectual indictment, nor is it likely to be mistaken for one. As a gentle poke at social injustice, with a separate line of drama running alongside it, it’s pretty good.