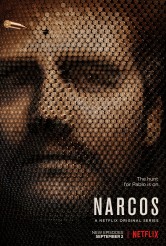 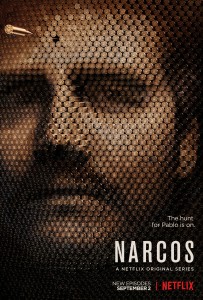 Season 2 of Netflix’s hit NARCOS launches in its ten-episode entirety Friday, September 2. The fact-based series chronicles the home and professional life of Colombian drug lord Pablo Escobar, played by Wagner Maura, and the efforts of the U.S. Drug Enforcement Agency to bring him down. Real-life DEA agents Steve Murphy and Javier Pena are played by, respectively, Boyd Holbrook and Pedro Pascal.

Born in Chile and raised in the U.S., Pascal enjoyed a healthy career in theatre and television before gaining international cult status for his performance as the magnetic Oberyn Martell in Season 4 of GAME OF THRONES. He costars in the upcoming feature films THE GREAT WALL and KINGSMAN: THE GOLDEN CIRCLE.

NARCOS executive producer Eric Newman is with Pascal for a post-Q&A panel conversation at the Television Critics Association press tour.

AX: How did you come to cast Pedro Pascal as Javier Pena?

ERIC NEWMAN: It’s a terrible story, because I am a huge GAME OF THRONES fan, and one of the things you do when you put a show together is, you talk to all the agents about who’s available, and in the midst of the build-up to the [GAME OF THRONES] duel, I’m really invested in the show, and I love his character, and his agent says, “Guess what? Pedro Pascal is available next year.” Which means he’s going to die in this duel that’s coming up, and I was devastated for three weeks before the duel. I knew he was going to die, and I couldn’t share it with anyone, and it was horrible. But we were so lucky to have him. It was a huge piece of casting for us.

AX: Do you feel like people’s reactions to GAME OF THRONES had an effect on people’s interest in your career, inside and outside the industry?

PEDRO PASCAL: It definitely was a game-changer, as I think it is for most people that get an opportunity to be on a show like that. I was in New York, doing a play, actually, we were doing Shakespeare in the Park, which is open to the public, they line up and get free tickets, and so it was running as the season was airing on television, so I had a direct experience in terms of the impact that it was making. It would have been packed anyway, because it’s free theatre, but there were avid fans of the show, which I understand – I’m one of them – and they would come and wait for little old me [laughs].

AX: What attracted you to NARCOS, the project or the character?

PASCAL: I’ve been at this for a really long time, and I’m not used to having opportunities like this, so to be honest with you, I didn’t really need to know what it was, I just needed to know that it was going to be on Netflix. I was already such a huge fan of the network, I’m addicted to so many of the shows that were original content for them. And I knew who [NARCOS director/executive producer] Jose [Padhila] was, I’d seen his movies, I’d seen his documentary BUS 174, the ELITE SQUAD films, so I said yes to it before even reading the script.

AX: How would you say Javier Pena compares as a character to Oberyn Martell?

PASCAL: That’s for you to judge, but it’s definitely a very interestingly textured badass. That’s the hope, anyway, and that’s how a part like Oberyn Martell in GAME OF THRONES can bring pretty cool characters your way.

AX: What did you learn during Season 1 of NARCOS that’s been useful to you in Season 2?

PASCAL: Get as much sleep as I possibly can [laughs]. It’s a grueling, grueling schedule. But I think that there isn’t any one way to answer that question, because the trial and error of doing the first season of any kind of show is very specific, and then living in Colombia for half of the year doing this show, I learned a lot of things that have helped me with Season 2. I wouldn’t know which one to single out as particularly important, to be honest with you.

It’s not even my first time working in Colombia, actually. I was there about five years ago shooting a movie, and I felt as safe there as I have anywhere. And I think it was more a matter of, how to avoid the worst traffic, and always bring a sweater, because there are four seasons in a day in Bogota. We’re at nine thousand feet, and it may be seventy-two [degrees] at one o’clock in the afternoon, and by two-thirty, it’s dropped down to fifty-three.

AX: On NARCOS, the show runners changed from series co-creator Chris Brancato on Season 1 to Adam Fierro and then Jose Padilha and Eric Newman on Season 2. Did those changes affect you much?

PASCAL: In terms of Season 2, what we’ve had – the people that have been primary for us are Jose Padilha and Eric Newman. The idea of show runner I suppose isn’t terribly clear to me, because they keep surrounding themselves with wonderful writers, and I haven’t felt the influence of change in terms of my experience, or the scripts. It all felt kind of steady. It’s definitely an adventure, and there’s a beautiful kind of chaos to shooting down there. A cast this large, episodes this ambitious, a story this ambitious, but there haven’t been any interruptions in terms of the structure which we are experiencing on this show.

AX: Obviously, most people have heard something about Pablo Escobar, but how aware were you of this story before you became involved in NARCOS?

PASCAL: A lot less than many, and a lot more than many as well. I’m Chilean. I grew up in the States, but I was born there, and I think South Americans have more of an understanding of what went down in that era. But again, my impressions are more directly formed by movies like SCARFACE and stuff like that. I knew that he was in Congress [in Colombia], built schools and museums in Medellin and stuff like that, but not to the extent to which I understand it now.

I knew as much as your average person, growing up, and a lot of it, I suppose, was fed to me through the media at the time. I knew that a movie like SCARFACE couldn’t exit if it weren’t for this Pablo Escobar. I went down in ’89 with my family – my father’s a doctor and there’s an associate of his in Bogota, and we spent some time there – and [the associate is] a surgeon, and not a politician or a billionaire. But when I went out with his kids, we had bodyguards and bulletproof-windowed cars. And what was interesting about that was, obviously, as an outsider, I was able to recognize that as something that wasn’t normal to me. But at the time, then and there, it was very normal, and treated as such. So that was my very visceral impression of who this man was, and what was going on. And then of course, you learn so much by being there, because everyone there lived it.

AX: Do you think people watching NARCOS will have any sympathy for Escobar?

PASCAL: I don’t know. I honestly don’t know. I can’t answer that question, and I don’t want to be able to answer that question, because what’s most interesting to me is for that to be an ever-shifting issue, or to have that scary moment where you’re empathizing with somebody who blew up a plane just to take out one guy, because of the conversation that he’s having with his son about being bullied during a soccer game. And him talking to him as a father, and saying the thing that you wish your father had once said to you. And that’s sort of like a blurry narrative, which to me is the most exciting thing.

AX: Obviously, you can’t talk about Season 2 much yet, but do you have a favorite Season 1 scene?

PASCAL: You know, I miss my informant, [actress] Adria Arjona, I miss [her character] Helena. She was a great scene partner, and I feel like that was a beautiful storyline. I miss the actress and the character very much.

AX: So far, at least, Javier Pena hasn’t had any scenes with Pablo Escobar. Do you want some scenes with Wagner Maura?

PASCAL: I wish that more than anything. He is one of my favorite persons, one of my favorite actors. I spend half the time being jealous that I am not [playing] a narco trafficker, and that I am hunting him, which means I never get to be in a scene with him. I want him to have dreams about, or maybe Pena can have a dream sequence with Escobar, so that we can actually have a day of work together on set.

PASCAL: I actually don’t know. If he did, he hasn’t told us.

AX: What do you think NARCOS has to say about what the U.S. calls “the war on drugs”?

PASCAL: What I think it says is that what we’re dealing with is an actual industry. It’s a billion-dollar industry, and I think that that isn’t necessarily the motivations of one singular man after power, but demand that is ultimately being met, and how it’s being fought, I don’t have an opinion to share, but I think from every sign, I think every element of this quote-unquote “war” contributes to its continuing.

AX: If NARCOS reaches the end of Escobar’s story, could the series continue with the careers of Pena and Murphy?

PASCAL: I think it’s a possibility. I really have no idea. There certainly isn’t any lack of storytelling around the subject matter. Whether it would involve Murphy and Pena, I have no idea.