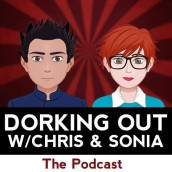 An entire episode dedicated to the STAR TREK universe

Hey there, dorks. In honor of the 50th anniversary of STAR TREK, we are going to boldly go where this podcast has never gone before: over the two-hour mark. We have put together an epic STAR TREK-themed episode for this week’s episode of “Dorking Out.”

In our first two segments, Mark A. Altman and Edward Gross, the authors of the best book we’ve ever read about STAR TREK and the inner workings of Hollywood, “The Fifty-Year Mission: The Complete, Uncensored, Unauthorized Oral History of Star Trek: The First 25 Years,” join us to talk about all things STAR TREK, including the original series, THE NEXT GENERATION, DEEP SPACE NINE, VOYAGER and ENTERPRISE, as well as all of the movies. They share some of the untold stories of STAR TREK and give us some dirt on the behind-the-scenes drama. Plus, we chat about the upcoming new series “STAR TREK: DISCOVERY.

Gross and Altman’s second volume, “The Fifty-Year Mission: From The Next Generation to J.J. Abrams,” comes out August 30.

In our third segment, we talk with Jeff Bond, who wrote the definitive book on STAR TREK music, “The Music of Star Trek,” produced the “Star Trek: The Original Series Complete Soundtrack” box set for La-La Records, and starred at Dr. McCoy in the fan series “Star Trek: New Voyages.” We discuss the music of STAR TREK and the culture of fan films and fandom.

We hope you enjoy our dorky podcast. You can listen to it here, or you can find us on iTunes, Stitcher, and YouTube. For links to all the STAR TREK subjects we discussed, sign up for our newsletter.

Related: DORKING OUT – Episode 9: The The Fall Movie Preview and All Fandom Review Edition

Related: DORKING OUT – Episode 8: The can SAUSAGE PARTY and the FPJ Scale Save Comedy Edition

Related: DORKING OUT – Episode 5: The Star Trekking Across The Universe Edition

Article Source: Assignment X
Article: DORKING OUT – Episode 9: The can SAUSAGE PARTY and the FPJ Scale Save Comedy Edition