bones Review The Monster in the Closet Season 11 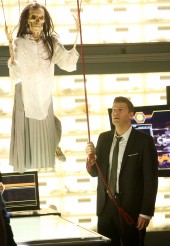 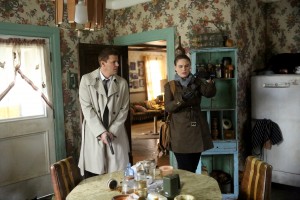 While BONES and CRIMINAL MINDS are both popular, long-running TV series – in fact, BONES is in its eleventh season, while CRIMINAL MINDS just wrapped theirs – and both are procedurals that deal with teams of brilliant government investigators, it seems like there isn’t a huge amount of crossover viewership. After all, BONES is customarily light-hearted, with humor and romance, while CRIMINAL MINDS is more like HALLOWEEN told from the point of view of the cops, with a serial killer almost every week. But occasionally, BONES has a plot that could work on that other show, which is the case with the episode “The Monster in the Closet.”

“The Monster in the Closet” initially takes its title from literal fears about such a creature. Brennan (Emily Deschanel) and Booth’s (David Boreanaz) little daughter Christine (Sunnie Pelant) is certain there is something evil hiding in her room. Mom and Dad, in their different ways, reassure their child that everything is perfectly safe. “Monster” plays with our expectations and delivers a good fake-out scare (in context – BONES is never about real terror) once it’s determined that there is a particularly strange multiple murderer out there who has seen most of our protagonists when they walk in front of his hidden camera.

This killer’s bizarre m.o. is to kidnap and kill people he admires, then turn them into human marionettes, then symbolically “kill” them again and dispose of the remains. When lab assistant Arastoo (Pej Vahdat) notices the murder pattern before Brennan does, the good doctor at first thinks there must be a mistake – she’d never overlook something like this. Then Arastoo explains that the first set of bones turned up during the period when Brennan and Booth had both quit their jobs. Brennan is jolted by guilt and remorse at not having been on the case sooner, as quicker detection might have prevented the second murder. Whether or not this is true, it’s nice to see the character, and the show, acknowledge that having Brennan turn her back on her calling wasn’t such a great idea.

Gibbons, a suspect in the killings (Jim Beaver of SUPERNATURAL) is found, but he’s merely a pawn of the real culprit. When the team finds surveillance equipment in Gibbons’ home, Angela (Michaela Conlin) realizes they’ve all been seen by the killer. Gibbons is so afraid that the murderer will harm his favorite cat that he commits suicide in jail rather than provide a name.

Brennan tells Booth that she’s afraid that she and the killer have a lot in common – they both look at sets of bones and can envision from these a living person. Booth of course insists that Brennan has nothing in common with the murderer.

Lab boss Cam (Tamara Taylor), who has been unsure of how she feels about ex-fiancé Arastoo, asks him to drive her home and then stay with her, using the loose but real pretext that she’s unnerved that the killer has seen her.

At the Booth/Brennan home, a crash in Christine’s bedroom sends both parents running, but the little girl has just knocked something over. She’s feeling a lot more confident about the monster in the closet, and in fact, there’s nothing there …

… but there is someone outside watching through the window, focusing on Brennan.

This last is a nice, eerie bit, and the episode has fun bringing up the tension by suggesting that someone is in Christine’s closet, even though this turns out to be a mislead. It’s always pleasing to see Vahdat on the show, though it’s disappointing that the terrific Beaver gets relatively little screen time.

It seems unlikely that we’ve seen the last of this particular evildoer, and his technique is memorably macabre.