Home » Game of Thrones Review Blood of My Blood Season 6 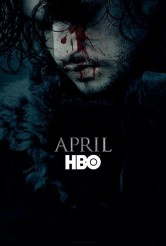 A big episode for Arya and for Sam 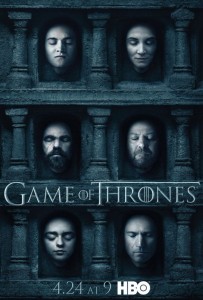 In the GAME OF THRONES episode “Blood of My Blood,” Sam (John Bradley) definitively moves forward, Arya (Maisie Williams) returns to herself, and other characters reiterate their positions.

Meera (Ellie Kendrick) keeps dragging Bran’s (Isaac Hempstead-Wright) sledge until she finally collapses. Bran is having visions of the past, including events long before his birth, with the Mad King screaming, “Burn them all!” He comes out of his trance moments before the White Walkers arrive – but Bran and Meera are rescued by a mysterious horseman with a flaming flail. Well, that’s quite an action sequence, and quite an entrance from the new character, who turns out to be … Uncle Benjen Stark (Joseph Mawle), missing and presumed dead since Season 1.

Turns out Uncle Benjen, during his tenure with the Night’s Watch, was stabbed by a White Walker, but rescued by the Children of the Forest, who used dragonglass to save him. Uncle Benjen recognizes Bran as the new Three-Eyed Raven. We’re happy to have Uncle Benjen back, and glad to know Bran has a plot function, and that’s a great White Walker fight, but really, truly, it is time for GAME OF THRONES to do something dynamic with Bran Stark. It’s no fault of Isaac Hempstead-Wright, but the audience shares Bran’s frustration at his inability to have direct impact on things more than is probably good for anyone.

In the South, Sam and Gilly (Hannah Murray), with Baby Sam, travel to Sam’s home, the vast Tarley estate. Sam is nervous, which is understandable, since his father Randyll Tarley (James Faulkner) is just as awful as Sam made him out to be. Sam’s mother Melessa (Samantha Spiro) and sister Talla (Rebecca Benson) are warmly welcoming to Sam and to Gilly, especially because Sam lies and tells them little Sam is actually his son. Sam’s intention is to leave Gilly and little Sam there for safety, but when Lord Tarley learns that Gilly is a Wildling, he’s furious. Lady Tarley rebukes her husband, so Lord Tarley says that Gilly can stay as a scullery maid, and the baby can remain there as well, but Sam can never return. Sam’s plans change. He takes the Tarley sword of Valyrian steel – something that can kill White Walkers – and tells Gilly to come with him. They’ll never be separated, Sam declares.

Where this leaves Sam’s career as a maester is unclear – the Night’s Watch does need him in that capacity – but it’s great for the character to stand up and actually act on his own wants for a change. The Tarley estate exteriors are quite impressive.

In Braavos, Arya watches the players’ troupe re-enact their version of King Joffrey’s death. There’s a very nice moment when Arya tries to suppress her laughter while the rest of the audience is exhibiting grief at His Majesty’s demise. As per the orders of Jaqen (Tom Wlaschiha), Arya poisons the wine of lead actress Lady Crane (Essie Davis). After talking with the woman, Arya thinks better of it, dashes the wine from Lady Crane’s hand and advises her to beware of the younger actress who’s paid to have her rival killed. The Waif (Faye Marsay) is there and replaces the poisoned wine. She reports back to Jaqen that, as she predicted, Arya failed. Jaqen is disappointed. The Waif reminds him that he promised she could kill Arya; Jaqen tells her not to let Arya suffer. Arya, meanwhile, has retrieved her sword Needle from its hiding place and waits for the Waif to come to her.

It has seemed all along that Arya had way too much sense of self to ever truly become “no one,” as the House of Black and White demands. It’s easy to applaud her retaining both her identity and her moral compass. However, what’s with Jaqen having a soft spot for Arya and the Waif feeling vengeful toward her? Neither of these emotional states seems in keeping with the whole “being no one” ethic. This wouldn’t be problematic if it were clearer whether we’re meant to see this as a contradiction of the Faceless Men’s rules, or whether the show’s makers couldn’t quite figure out how to line up the potentially grave consequences for Arya with the absolute dispassion that Jaqen has espoused.

In King’s Landing, the High Sparrow (Jonathan Pryce) allows King Tommen (Dean-Charles Chapman) to finally see Queen Margaery (Natalie Dormer). Margaery appears to have finally bought into the Faith Militant, gently telling Tommen that she now sees that she wanted to appear to be merciful, that she has sinned. Jaime (Nicolaj Coster-Waldau), leading the Kingsguard and the Tyrell army, rides up the steps of the church to prevent Margaery from having to take the Walk of Atonement. There is a huge crowd of the faithful there, but the soldiers are of course better armed. The High Sparrow takes control of the situation and says there’s no need for Margaery to take the Walk of Atonement – she’s brought her husband, the King, into the Faith, and now the monarchy and the Faith Militant are joined. Margaery’s grandmother Lady Olenna (Diana Rigg) is thoroughly aggravated – she tells Jaime they’ve lost.

Someone else who’s also completely irate, though for other reasons, is Walder Frey (David Bradley), famous host of the Red Wedding. His sons have managed to lose Riverrun to the Blackfish, Lady Catelyn’s uncle. Edmure Tully (Tobias Menzies), the groom at the Red Wedding, is still Frey’s prisoner. Frey tells his sons to threaten the Blackfish with Edmure’s death.

Now that we’ve spent time with Lord Ramsay, Walder Frey looks reasonable by comparison, but he’s still a quality villain. And for viewers wondering why Edmure looks so familiar, it’s not just from GAME OF THRONES – actor Menzies is also Frank/Jack Randall on OUTLANDER.

Jaime can’t believe it when Tommen wants him to go off and retake Riverrun, Walder Frey being an ally. Cersei (Lena Headey) urges brother/lover Jaime to obey the king. She has a plan and the High Sparrow will ultimately pay, as will everyone who has wronged Cersei and Jaime. Cersei and Jaime kiss, their passion for one another evidently requited on both sides at present. Jaime is definitely devoted, but Cersei’s schemes are always horrendous. Then again, the Faith Militant is so unpleasant in its machinations, despite those pleasant ideals, that it’s hard to know who we’re rooting against more.

In Essos, Daenerys (Emilia Clarke) talks with Daario (Michiel Huisman), asking how many ships it will take to bring all of her armies – Dothraki, the Unsullied, et cetera – to Westeros. There aren’t that many ships, yet, but there will be. Just in case the Dothraki didn’t already adore their Khaleesi, Daenerys flies over them on Drogon, and makes a rousing speech from the back of her dragon.

We’d as soon Daenerys not completely devastate Westeros – it has people we like there, including Sam, Jon Snow, Sansa, Brienne and a few others. On the other hand, it may take a few dragons and a whole lot of soldier power to do something about all of those White Walkers. One thing is for sure: Clarke as Daenerys is a terrific orator. Every time Daenerys determines to get people to follow her, the audience is inclined to fall into formation for the march.