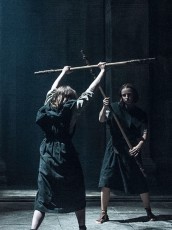 An episode consisting primarily of set-up, including the big action sequences 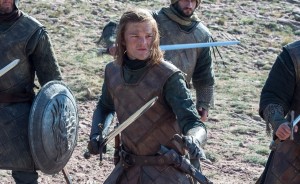 Not every episode of GAME OF THRONES is going to be entirely epic, and despite the gargantuan plot point of Jon Snow’s return from the dead, the episode “Oathbreaker” is much more about plot than spectacle or even emotion.

Alone with Davos (Liam Cunningham), the newly-resurrected Jon (Kit Harington) confesses that he feels he’s failed. Davos is just glad to have him back: “Go fail again.” The Night’s Watch and the Free Folk gathered at Castle Black are all pretty impressed, and Melisandre (Carice Van Houten), once she’s over the shock of the fact that her magic worked, believes that Jon is the prince she was in her visions.

Given what Melisandre’s done herself and had done in the name of those visions, most viewers will be just as happy if she takes no further action regarding this. Otherwise, Jon’s ability to express emotion, to take and make a joke and to be happy to see friends indicates that he’s back as himself, more or less, and that he’s certainly not turning into a White Walker. Moreover, “Oathbreaker” deals briskly with the whole business, not reinventing the wheel but rather starting right when Davos sees that Jon is alive.

Below decks on a ship carrying them from the North to Oldtown, Gilly (Hannah Murray) is enjoying her first sea voyage. Sam (John Bradley), not so much. Between bouts of being extremely seasick, Sam tells Gilly his plans. He will take her to his family home, where his wealthy father is awful, but his mother and sister are kind. This will keep Gilly and baby Sam safe. Then Sam will study at the Citadel (where women are not allowed) and become a Maester, so he can help keep Gilly, baby Sam, Jon Snow (and, only incidentally, the rest of the world) safe. Gilly trusts Sam and indicates that she considers him to be baby Sam’s true father (for those tuning in late, baby Sam’s father is Gilly’s late, unlamented rapist father). As bits of moving-the-story-forward exposition go, this is charming. We’ve missed Sam lately, so it’s good to see him again.

Bran Stark (Isaac Hempstead-Wright), with the Three-Eyed Raven (Max von Sydow), sees his father Ned (Robert Aramayo) as a young man, accompanied by Meera Reed’s father, while both are soldiers of the newly-victorious Robert Baratheon. Heading for a castle, they and their company are stopped by Arthur Dayne (Luke Roberts), a Targaryen loyalist, who is guarding the isolated structure with his men, having been sent here by the late Prince Rhaegar. There is an immense battle. Ned does literally kill Dayne, in that he delivers the death stroke, but he’s only saved from Dayne’s swords because the dying Reed stabs Dayne in the back. This is not how Bran had heard the story. When Dayne dies, a woman in the castle screams. Ned goes into the castle, but the Three-Eyed Raven stops Bran from following. Back under the tree, Bran is frustrated, but the Three-Eyed Raven assures the youth that he won’t be here forever. He just has to learn “everything” first.

There have been a lot of theories about where this is all going. This reviewer thinks the most popular one is probably right, and that it would be just fine by now to cut to the chase as to exactly what happened with Ned’s sister. Giving Bran visions of the pertinent back story is as good a way of dramatizing exposition as any, but we share his desire for him to rejoin the world and actually participate in the story.

Daenerys (Emilia Clarke) is brought to Vaes Dothrak, a city inhabited by the widows of khals. Daenerys is left alone with women who strip her of her clothing and give her plain garments. Daenerys is informed that staying here is the best she can hope for – a khal’s widow is meant to come straight to Vaes Dothrak after his death, but Daenerys did what is forbidden and went out into the world. Now a gathering of khals will decide her fate.

Since perhaps the biggest twist GAME OF THRONES could take would be to have Daenerys stuck in Vaes Dothrak forever, perhaps we shouldn’t rule that out entirely – they love to surprise us – but rescue or death seems more likely. This feels just a bit like a late-in-the-day story detour, but the show was virtually obligated to pay off the end of last season, and it wouldn’t have worked to have the dragon simply reappear ten minutes later and bring Daenerys back to Meereen.

In Meereen, Varys (Conleth Hill) uses gentle persuasion, a bribery and some threat (rather than torture) to get information from a woman who has been an assassin for the Sons of the Harpy. Varys relates his intel to Tyrion (Peter Dinklage), Missendei (Nathalie Emmanuel) and Grey Worm (Jacob Anderson):  the rebellion against Daenerys is being funded by the slave masters in three other cities. Grey Worm recommends fighting them; Tyrion is concerned that this will leave Meereen undefended. Varys says he’ll use his spy network of “little birds” to suggest to the masters that it would be best to back off.

There’s no arguing with any scenes involving Tyrion and/or Varys. Even Tyrion waiting, trying in vain to make conversation with the absolutely serious Missendei and Grey Worm, is pretty delightful. And, of course, this all moves the story forward.

In King’s Landing, Qyburn (Anton Lesser) has taken over Varys’ network of “little birds” – that is, street urchins happy to trade what they hear for candy. Cersei (Lena Headey) and Jaime (Nicolaj Coster-Waldau) want Qyburn’s spies in Dorne, Highgarden, anywhere there may be plotting against House Lannister. When Cersei and Jaime try to join a Small Council meeting, however, the Council (headed by Cersei’s uncle Kevan) all leave the chamber.

Again, this is good drama, and it’s particularly pleasing to see Diana Rigg as Lady Olenna Tyrell, there still endeavoring to get her daughter, Queen Margaery, out of the clutches of the Church Militant.

King Tommen (Dean-Charles Chapman) goes to see the High Sparrow (Jonathan Pryce), at first demanding that a) his mother Cersei be allowed to see her daughter’s final resting place and b) that the High Sparrow rescind the order that Cersei be tried by the Church. The High Sparrow sends his guards away, persuades Tommen to do the same, and speaks to the young man in a persuasive, friendly manner. It all seems to make so much sense …

In Braavos, Arya Stark (Maisie Williams), back at the House of Black and White, is questioned by the Waif (Faye Marsay) during their staff-fighting sessions. Arya finally admits that she no longer wanted the Hound, Sandor Clegane, to die. Still on her list of people she wants dead are Cersei Lannister, Gregor Clegane and Walder Frey. Still blind, Arya learns about mixing potions and powders. Finally, she is able to beat the Waif at stick-fighting and, after a final assertion that she is no one, Arya gets her sight back from the Man (Tom Wlaschiha).

Williams is as gloriously fierce as ever, but it does beg the question of how she can still remember her list and be accepted as “no one.” Maybe the Man is getting a little soft on the lack-of-identity rules. In any case, it’s a strong set of sequences.

At Winterfell, Smalljon Umber (Dean S. Jagger), now leader of his House, comes to Ramsay Bolton (Iwan Rheon) for help against the prospect of a Wildling invasion. Umber assumes that Ramsay killed his own father, though Ramsay mildly protests otherwise. Umber refuses to kneel, but offers a gift – he’s captured Rickon Stark (Art Parkinson), his Wildling guardian Osha (Natalia Tena), and brought the head of Rickon’s direwolf to prove it’s really him. Ramsay is delighted.

Auggh. It’s a shame Ramsay isn’t on Arya’s list. Since nobody except Bran, who’s not in a position to do anything, even knows Rickon is alive, the straits seem fraught indeed. In the writing and the acting, Ramsay is proving again and again to be fabulously hateful.

Back at Castle Black, Jon must preside over the hanging of those who conspired against him, including Alliser Thorne (Owen Teale) and young Olly (Brenock O’Connor). Olly still glares at Jon with absolute hatred. Jon hangs them – and then turns over command of the Night’s Watch to Edd, saying “My watch has ended.”

Technically, this is true. Jon died, so in that sense, he’s no longer bound to his oath, episode title “Oathbreaker” notwithstanding. Of course, Davos and Melisandre didn’t bring Jon back just so he can be depressed and wander off, so we’ll see how long his absence from the Watch lasts.

In terms of getting all the pieces into place, “Oathbreaker” is effective and entertaining, but one still notices that the biggest set piece – the fight between Ned and his men and Dayne and his men – is a flashback that doesn’t move the plot. It’s swell to watch Arya reach a state of implacable determination and fight someone, anyone, and that does move the present story forward a bit, but this is mainly about setting the chessboard, which it does efficiently and entertainingly.