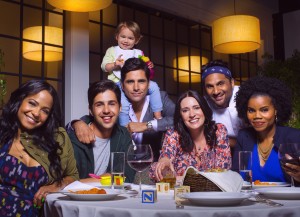 The cast of GRANDFATHERED on Fox | © 2016 Robert Trachtenberg/FOX

In Fox Network’s Tuesday-night comedy GRANDFATHERED, which has its first-season finale May 10, John Stamos plays nightclub owner Jimmy Martino. In the half-hour show’s pilot, Jimmy was stunned to find out that not only does he have a son, Gerald (Josh Peck), with old love Sara (Paget Brewster), but that Gerald has a baby daughter with his own flame Vanessa (Christina Milian).

SAM LAYBOURNE: It’s been great. I feel like we’ve turned a corner where we’ve been able to really serialize an arc in the back half of a show, you’re able to let storylines breathe, people come together, connect more, and the show’s really humming now. And we’ve had a time slot change – we’re on Tuesdays at 8:30 after NEW GIRL. So Fox has been great, giving us some lead-in. [Originally], we were starting the night on Tuesdays. And with that lead-in, they built a really smart night, and we felt like the second half of the year [gave] us a chance to restart, in a way.

AX: When GRANDFATHERED premiered in 2015, you were being grouped together a lot with another new Fox comedy, THE GRINDER. Both shows star former Eighties heartthrobs – you have John Stamos, GRINDER has Rob Lowe – playing men suddenly dealing with their families. Do you feel like getting away from THE GRINDER, at least in terms of time-slot, gives you a little more chance to develop your own identity?

LAYBOURNE: It is. I mean, it’s a great one-two combo any time you can be with Rob Lowe, and it just made a lot of sense. We loved that, and we liked the show a lot, but it is nice – because so early on a show, when you’re looking at next-day ratings, you quickly develop a narrative about, “How does this work as a block?” And we’ve shown that wherever you put us, we’re getting a solid number, and then we’re really increased in live-plus-threes and –sevens. So I think we’ve shown Fox that we can be hopefully more than a utility player, but at least, we work in combo or not in combo with other stuff.

AX: As far as the story arc, were there things you had planned from the beginning if you got the back nine, or was this, you saw how things were going, and you thought, “Oh, this works, we should try more of this …”?

LAYBOURNE: It’s a little bit of a cocktail. There have been a couple things that were really charted out, but there was a lot of early planning in terms of Jimmy/Sarah, because their chemistry was immediate in the pilot. So we always knew we would – some coming together, some pulling apart – but it wasn’t really until we saw how the rest of the ensemble performed around them that we realized how to tease it out and how to play it. But honestly, the stuff with Josh Peck and Christina Milian has really blossomed because of the work that they’ve done, and Christina is so funny, and her character has just presented itself over the year that I think we’ve changed a lot of our initial plan, just based on the great stuff they were giving us.

AX: What about the parent/grandparent/baby situation? Are you getting any ideas based on how it actually is to deal with the baby on set?

LAYBOURNE: That’s a good question for this guy [turns to Chris Koch]. When there’s a baby on set, how does that generate ideas?

CHRIS KOCH: Well, a lot of times, we just run two cameras and we let John and the rest of the cast are so great at playing the baby and having fun with the baby, but I run two cameras, so if a baby wants to run off, we can capture it. It makes it very easy and it makes it very real, as opposed to doing traditionally what they would do, on even FULL HOUSE, they’d shoot an insert of the baby separated from everyone else.

AX: And how is your character evolving through the show?

KELLY JENRETTE: We get glimpses into who Annelise is. There is an episode where she gets an interest – I won’t say a “love” interest, because I don’t know that Annelise believes in love [laughs] – but she gets someone and of get a glimpse into why she is or isn’t very good at relationships.

AX: Have you gotten any of your dream acts to perform in Jimmy’s club?

LAYBOURNE: Well, already, we’ve had Richie Sambora. But my personal favorite dream act at the club is an episode where Kelly gets a moment to shine. Because Kelly’s a beautifully-trained singer, but she had to sing badly, which is really hard if you’re very good. And I think it’s one of the funniest moments of the show. Chris directed it.

JENRETTE: And he would never yell “Cut,” so I was there singing for the longest, sweating, waiting on him to yell “Cut.”

KOCH: She was trying to sing as badly as she could, and we would cut and say, “Kelly, it’s still too good.”

AX: What were you singing?

JENRETTE: I was singing “Tempted” by Squeeze.

AX: And what would you most like people to know about GRANDFATHERED right now?

LAYBOURNE: I would like them to know that the chemistry they’re picking up on is going to pay off. There are a lot of shippers out there rooting for different relationships – I think we have different ways of paying that off, without letting the drama dissipate. There’s lots more for the second season, but we’re not afraid to go big and try stuff, and I think that’s a lot of what they’ve really been responding to.