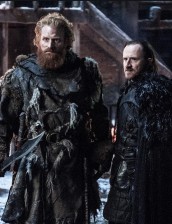 Some surprises and one very happy if unsurprising development 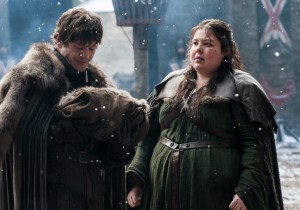 GAME OF THRONES has a few homesick characters in the episode “Home,” but home is also a state of mind, as exhibited in the final sequence here.

In the cave north of the Wall, Bran Stark (Isaac Hempstead-Wright), studying with the Three-Eyed Raven (Max Von Sydow, taking over from Struan Rogers) sees visions of his father Eddard and uncle Benjen as boys playing in the courtyard at Winterfell. Bran also sees his aunt Lyanna as a young woman and, most surprisingly, huge servant Hodor (played as an adult by Kristian Nairn) as a young man called Willis, who can speak and behave normally. Asked about all this later, Hodor of course says, “Hodor.” Meera Reed (Ellie Kendrick) broods outside the cave, though a Child of the Forest appears to her and promises that Bran will need her.

This sequence is worth it just to know more about Hodor, though it’s hard not to chuckle when Meera gripes that Bran continues to have visions and nothing ever happens. They’ve been gone for an entire season, we come back and it’s still meanwhile back Beyond the Wall. However, there is more of a sense of portent now. Possibly it’s because Hempstead-Wright is older and conveys more urgency, possibly it’s because of Von Sydow. Most likely, it’s because we know this has got to be going somewhere or the show wouldn’t return to it at all.

At Castle Black, in the room where Jon Snow’s (Kit Harrington) body lies, Davos (Liam Cunningham) and Jon’s friends prepare to make a last stand against Ser Alliser (Owen Teale) and the Night’s Watch. At the last moment, the Wildlings – including a Giant – led by Tormund (Kristofer Hivju) and Night’s Watch brother Edd (Bren Crompton) knock down the gate. Except for Ser Alliser and Jon’s former steward Olly (Brenock O’Connor), the Watch surrenders promptly. The viewer’s response is likely to be something along the lines of, Go, team. It’s satisfying and looks good (especially when the giant almost absent-mindedly smashes his comparatively tiny attacker against the inner courtyard wall), even if it seems a little restrained by GAME OF THRONES rescue standards.

In King’s Landing, the resurrected Gregor Clegane (Hafpor Julius Bjornsson) bashes in the head of a peasant for mocking Queen Mother Cersei (Lena Headey). Jaime (Nicolaj Coster-Waldau) has a standoff with the High Sparrow (Jonathan Pryce), whose Church Militant soldiers are near at hand. Jaime sends young King Tommen (Dean-Charles Chapman) to apologize to Cersei. Tommen is sincerely ashamed of himself for his failure to protect his mother Cersei and his wife Margaery from the Church. He asks Cersei to teach him how to be strong.

It is touching to see Cersei be genuinely kind to someone, and to see Tommen make an effort, even though Cersei is one of the last people who ought to be teaching anybody about the use of power. (She’s really got only herself to blame for the rise of the Church and her own humiliation as a result.) And Pryce is so delicious as the self-effacing Sparrow that we can almost forget what a monster the character is in practice.

In Meereen, the group ruling in Daenerys’ absence – Tyrion (Peter Dinklage), Varys (Conleth Hill), Missendei (Nathalie Emmanuel) and Grey Worm (Jacob Anderson) – are still coping with the burning of the ships in the harbor. Slavers have retaken all the other cities Daenerys had previously liberated, and Meereen’s future is in doubt. However, Daenerys has assets available to no one else – her dragons, two of which are still in the dungeon below the castle. Tyrion hopes that the dragons are as intelligent as legend would have it, able to recognize friendly gestures. Scared to death, he unchains the two huge beasts, who show their gratitude by not killing him.

If one doesn’t see the appeal of Dinklage as Tyrion speaking to gently and pleadingly to impressively real-looking CGI dragons, there’s no explaining it. If one does see the appeal, yes, it’s as splendid as it sounds.

In Braavos, Arya Stark (Maisie Williams) is still blind, begging in the streets and regularly getting beaten (literally and figuratively) during quarterstaff fights with the Waif (Faye Marsay) from the House of Black and White. Finally, though, when Arya resists bribes to say her own name, the Man formerly known as J’aqen H’gar (Tom Wlaschiha) takes her back. This isn’t exactly a surprising turn, but it’s sturdy and upholds Arya’s character well.

At Winterfell, Lord Roose Bolton (Michael McElhatton) and Ramsay (Iwan Rheon) are displeased by the news that Sansa Stark (Sophie Turner) has escaped, obviously with help. When Ramsay suggests that Sansa will doubtless go to her half-brother Jon at Castle Black – word of Jon’s murder hasn’t gotten out yet – Roose says that attacking the Lord Commander of Castle Black is a very poor idea. Then the steward announces that Roose’s wife Lady Walda (Elizabeth Webster) has given birth to a son. Roose assures Ramsay that Ramsay will always be his firstborn – and Ramsay stabs his father to death and commands the steward to send word that Roose was murdered by the family’s enemies. Then Ramsay leads Lady Walda with the baby boy to the kennels, where Ramsay looses the dogs on them.

So, a) the House of Bolton is now entirely under the rule of the crazed, wily sadist Ramsay and b) Ramsay is an absolutely worthy inheritor of the late Joffrey Baratheon’s crown as the worst person in Westeros. Kudos to Rheon, who is perfectly wonderful at being entirely horrible.

In the northern woods, Sansa (Sophie Turner) and Brienne (Gwendoline Christie) bond, talking about Brienne’s last sighting of Arya (who seemed well enough at the time) and not talking about exactly what happened to Sansa at Ramsay’s hands. Theon (Alfie Allen) tells Sansa he cannot accompany her to the Night’s Watch and take the Black – he’s done so many terrible things to her (and Jon’s) family that he can never atone. He plans to return to the Iron Islands.

While it didn’t really need to be said, it’s nice to hear Sansa acknowledge that she should have gone with Brienne much earlier. Seeing Brienne make friends with anyone is always agreeable, and it’s (doubtless short-lived) fun to see the knightly lady in a good mood, since she’s finally achieved her quest in rescuing one of Catelyn Stark’s daughters.

As for Theon – oh, all right already, he’s truly repentant for having murdered the farm boys and betrayed Robb Stark and all the rest of it. Between that, his genuine efforts to save Sansa, and Ramsay’s torture of him, he probably actually has atoned to the point where a majority of viewers would accept him joining the Night’s Watch. As it is, we’re grudgingly curious about what will happen to him.

On the Iron Islands, Yara Greyjoy (Gemma Whelan) argues with her father, King Balon (Patrick Malahide) about continuing to attempt conquest on the mainland. The Iron-Born keep losing. Storming out of the discussion, Balon is confronted on a rope bridge by his long-away brother Aeron (Michael Feast). Aeron may be insane – he declares he is personally the object of the Iron Islanders worship, the Drowned God – and he’s certainly unwelcome. Balon pulls a knife on him, but Aeron tosses his brother off the bridge, killing him. At the funeral ceremony, Yara vows vengeance on her father’s (unknown to her) murder. She’s the king’s sole known living heir, but the kingship will be put to a vote, and no woman has ever ruled here.

For those counting, that’s two fratricides so far in the episode (baby Bolton being Ramsay’s half-brother). We like Yara, but the most intriguing question right now is how the succession of rulers on the Iron Islands will (or indeed can) affect the rest of the story.

Back at Castle Black, of all the tragic, wrenching things that happen on GAME OF THRONES, one of them is not a failed resurrection. Davos goes to Melisandre (Carice Van Houten), who is now understandably convinced that everything she believed was wrong. Davos persuades her to try to use her magic to bring Jon back from the dead. Melisandre tries. Nothing happens. Tormund leaves, Melisandre leaves, Edd Tollett (Ben Crompton) leaves, finally Davos leaves and shuts the door behind him. Ghost the Direwolf wakes up. And then so does Jon Snow.

Given the build-up this received, Jon’s return is not entirely unexpected – face it, they weren’t going to have Harington just lay there for two episodes playing dead for no reason – but it’s still heartening. Given all the unexpected turns GAME takes, this still doesn’t mean that Jon will be the one to give Ramsay a profoundly deserved ass-kicking, but at least there’s somebody to save Western – er, Westeros – civilization from the White Walkers.