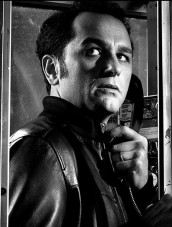 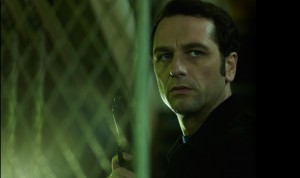 In FX Network’s THE AMERICANS, now in its fourth season Wednesdays at 10 PM, things are more intense than ever. Matthew Rhys plays Philip Jennings, married to Elizabeth (Keri Russell). Seemingly normal all-American travel agents in the early Eighties, Philip and Elizabeth are actually Russian KBG agents. Philip and Elizabeth actually fell in love after having two children, but now older child Paige (Holly Taylor) has discovered their true identities and told her pastor. Meanwhile, Philip wound up having to marry American FBI secretary Martha (Alison Wright) in his fake identity as Clark; Martha has learned that Clark isn’t who she thought he was, and that he killed an FBI agent to keep her bosses from realizing that she’d spied for Clark back when she believed he was an FBI agent. There’s a lot more going on, but that’ll do for now.

Rhys gives us the current dossier.

AX: Do you think it was a big turning point for Philip when Elizabeth decided she loved him?

MATTHEW RHYS: Oh, enormous. It hinged on that, because they wouldn’t have survived without that. And that’s what added the intensity to everything. If they’d carried on being these two operatives, sort of following a mandate but bonded by children, it would be a lot different show. It’s the fact that they do fall in love that makes everything else so incredibly difficult.

AX: And does that make him easier to play, or harder to play?

RHYS: I don’t think it makes him easier to play; it makes the situations certainly harder, but infinitely more interesting.

AX: Is it exciting to play scenes where Philip has to improvise, like the recent one where he killed a witness on a bus?

RHYS: Absolutely. And I stand by that. They do give an enormous amount of thought to very specific spontaneous moments, and how they would react or whatever. And that just makes the playing of it more exciting, and real as well.

AX: Last season, Philip’s American wife Martha found out he’d committed a murder to keep her from being exposed to her bosses at the FBI. Were you intrigued about how Martha would react?

RHYS: I was dying to know how it would all pan out, because it’s like those ticking bombs – you keep lighting fuses at the end of certain seasons, and then you spend the summer going, “How is this going to resolve itself? Or not?”

AX: Philip and Elizabeth are often in disguises that include wigs, and in Philip’s case, fake facial hair. That may be fun to play, but it looks like it could perhaps be uncomfortable …

RHYS: Absolutely. You know what? I think, inevitably, so many shows aren’t sure what they are at the beginning, and there was an element of disguise that was in the pilot, and it sort of caught fire, and then they ran with it. I hate wearing wigs. They’re desperately uncomfortable. I don’t know if you know this, but Keri and I often swap wigs. We do, and they restyle them. Our hair department is amazing with what they do. However, if I’m wearing one of Keri’s wigs, it’s incredibly tight on my head.

AX: In the summer of 2015, THE AMERICANS won the Television Critics Association Award for Outstanding Achievement in Drama. You and Keri Russell and the creators received the award from TCA member presenters who were in full costume as Philip in disguise as Clark and Elizabeth in disguise as Clark’s sister. What was your reaction to that presentation?

RHYS: I think that’s one of the greatest accolades we’ve ever received, that they would go so far as to dress up. The impact of [Elizabeth] and Clark struck home.

AX: THE AMERICANS is pretty on point in its Eighties details. Were any of  the Eighties clothing or props or music a surprise to you?

AX: Is there a pop cultural moment of the Eighties or a news moment that you hope you get to play some part in, in the show?

RHYS: I always wanted to do the dance from Dexys Midnight Runners “Come On Eileen” on this show [laughs]. But we’ve just passed that moment. I was like, “Can’t we get that?” And it was like, “No, it’s too expensive.” And I was like, “Ohh.” Because I could have put on the denim dungarees and clapped above my head.

AX: Do you think THE AMERICANS resonates at all with what’s going on now geopolitically?

RHYS: I think there are certainly strong overtones of it, and we weave in and out of things. I remember when the show first aired, and someone said, “Oh, this doesn’t seem very credible,” and that C.I.A. agent was caught in Moscow with all those wigs, and we were like [laughs], “Haha! It’s still going on!” And this is based on the arrests made in 2010 of that Russian cell in New Jersey. They only put it back in the Cold War to give it a little more welly. Especially the way Putin is these days.

AX: FX and the producers have said THE AMERICANS may wrap up in two more seasons, at the end of Season 6. Is that when you’d like to see it end?

RHYS: I think parts like these are sort of few and far between, with this level of intensity, duplicity, the multiple personality elements, the multiple relationship elements. I don’t see parts like this coming along often. So I’m happy to play this as long as possible.

CD Review: THE NEXT THREE DAYS soundtrack
The Dork Side: Donald Trump is not running for president (we hope)
TV Review: ONCE UPON A TIME - Season 1 - "Desperate Souls"
TV Review: SUPERNATURAL - Season 7 - “Out With the Old”