Home » Game of Thrones Review Book of the Stranger 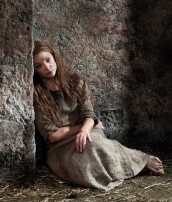 TV Review: GAME OF THRONES – Season 6 – “Book of the Stranger”

All hail Daenerys the Unburnt! 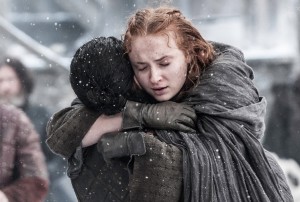 At Castle Black, for once, luck is with someone in the Stark family. Sansa Stark (Sophie Turner), escorted by Brienne (Gwendoline Christie) and Podrick (Daniel Portman), arrives before her half-brother Jon Snow (Kit Harington) has made his departure. In a straightforward but very touching reunion, Sansa apologizes for being awful to Jon when they were children, he apologizes for sulking, and they forgive each other. Jon then declares that he’s going to stay with Sansa and watch over her from now on, but when he asks her where she’d like to go, she says, “Home.” She wants to take Winterfell back from the Boltons, and when Jon says he’s sick of fighting, Sansa declares she’ll do it herself if necessary.

Bravo, Lady Sansa, who truly has grown from a twit into a respect-worthy character, and bravo actress Turner as well. The entire audience can empathize with not only her desire to go home, but also to put paid to the Boltons.

Meanwhile, Melisandre (Carice Van Houten) tells a startled Davos (Liam Cunningham) that she now follows Jon Snow. Brienne comes upon them and tells Davos that they previously met when she was in Renly Baratheon’s Kingsguard. She also says that Stannis, the contender for the throne previously followed by Davos and Melisandre, confessed to having Renly murdered with blood magic before Brienne executed him.

Brienne seems well aware that Melisandre was actually the agent of that blood magic and as our knight declares that she doesn’t forget or forgive, it seems like there will be a reckoning. However, since Melisandre – to say nothing of GAME OF THRONES – can be pretty ruthless, there’s no telling how that clash may end.

In the Vale, it doesn’t take much for just-returned Petyr Baelish (Aiden Gillen) to persuade his adoring (and not very bright) stepson, young local ruler Robin Arryn (Lino Facioli), that they ought to bring troops to help the escaped Lady Sansa defend herself against the Boltons.

Probably someone more clever than this reviewer can figure out exactly how Baelish means to turn this situation to his advantage. On the surface, this seems an unwise move, since Sansa is unlikely to be happy with him for marrying her into House Bolton, and she’s unlikely to respond to Ser Petyr’s manipulation again at this point.

In Meereen, Tyrion (Peter Dinklage) negotiates in the absent queen’s name with the slavers from Astapor, promising them they will be compensated for their “property” if they end slavery over seven years in exchange for them not funding the Sons of the Harpy. When angry ex-slaves question Tyrion about the meeting, Missendei (Nathalie Emmanuel), grudgingly, and Grey Worm (Jacob Anderson), even more grudgingly, stick up for him. Privately, both Missendei and Grey Worm tell Tyrion that he can’t trust anything the slavers say, and they don’t much trust him, either.

Poor Tyrion. He’s a strategist beset by contempt from the slavers and resentment from the ex-slaves, none of whom think he has much idea of what he’s doing. One thing seems likely – it won’t take seven years to see how it all works out.

In Essos, Ser Jorah (Iain Glen) realizes the Dothraki have taken Daenerys (Emilia Clarke) to Vaes Dothrak. He and Daario (Michel Huisman) sneak into the city to rescue her – on the way there, Daario sees that Ser Jorah is afflicted with the fatal disease greyscale. At Vaes Dothrak, Daenerys befriends a young widowed khaleesi whose late husband was brutal to her. The two women encounter Jorah and Daario, but it’s Daenerys who comes up with a plan of attack.

In King’s Landing, Margaery (Natalie Dormer) is brought from her cell to see the High Sparrow (Jonathan Pryce), who gently tells her of his own conversion to religion. He used to be a high-end cobbler, of all things, but then saw that his life was only a story he was telling himself about himself. Margaery seems to listen, but when she finally is allowed to see her imprisoned brother Loras (Finn Jones), she tells him they must stay strong. Loras has no interest in staying strong – in total despair, he begs Margaery for help in making it stop.

We feel bad for Loras and worse for Margaery, but – through no fault of the actors – there’s a bit of “meanwhile, back at the dungeon” to this. With momentum everywhere else, this feels like a lull.

King Tommen (Dean-Charles Chapman) confers with his mother, Cersei (Lena Headey), and confides in her something the High Sparrow told to him in confidence. The upshot – Cersei and Lady Olenna Tyrell (Diana Rigg) at long last find common ground. It seems Margaery is to be made to take a Walk of Shame. Cersei and Olenna agree this cannot happen, and Olenna is willing to call in the Tyrell army to fight against the Church Militant.

From Cersei’s point of view, it’s win-win. The High Sparrow will get trounced whatever happens, and she’d be just as happy if Margaery and Lady Olenna fall in the fracas.

Theon Greyjoy (Alfie Allen) comes home to Pike by ship. His sister Yara (Gemma Whelan) is understandably furious at him for what happened the last time they saw each other – he was terrified, calling himself Reek and betrayed her to the Boltons – but Theon apologizes, says he wants to see Yara rule the Iron Islands and promises to help her.

At Winterfell, Ramsay Bolton (Iwan Rheon) sends for Osha (Natalia Tena). She appears to be seducing him while trying to grab a knife to kill him, but Ramsay already knows she protected Bran and Rickon and stabs her in the throat.

Farewell, Osha, a good character. Rheon is expert, but somebody really needs to kill Ramsay.

Back at Castle Black, the Wildling Tormund (Kristofer Hivju) makes eyes at a nonplused Brienne over supper. A message comes from Ramsay that he’s got Rickon Stark (Jon’s young half-brother). Ramsay wants Sansa back, and if Jon doesn’t turn her over, Ramsay will … well, the letter goes pretty much as Sansa expects, even if Jon is shocked and appalled. Even though Ramsay has five thousand soldiers to Tormund’s two thousand able-bodied Wildlings, Jon is finally convinced that Sansa is right – they have to rescue Rickon, Winterfell and the good name of the Warden of the North (which Ramsay currently holds).

Sansa also argues that many of the Northern houses will come to their aid, since Ramsay is hardly popular. Not to belabor the point, but since Ramsay clearly needs to be decisively defeated, we’re with Sansa on this one. Ramsay’s missive also puts Tormund on Sansa’s side and even if Brienne weren’t already sworn to Sansa, she’d want to kill anyone who sent such threats. So, well, yay.

Back at Vaes Dothrak, Daenerys appears before the council of khals, who are deciding what to do with her – sell her to Astapor for ten thousand horses, let her join the Dosh Khaleen, pass her around among them. Khal Moro (Joseph Nauhafu) is inclined to send her to live with the Dosh Khaleen, until Daenerys speaks up for herself. She says all of these khals are little men, unfit to lead the Dothraki, so she will. Khal Moro is outraged, threatening Daenerys with rape and death. Daenerys turns over the burning braziers within the wooden structure, setting fire to both the building and the khals. When she emerges, naked and unscathed, the entire shocked assemblage of Dothraki outside – plus Jorah and Daario – kneel before Daenerys in submission and awe.

As well they should, because it’s an awesome sequence. One would have to watch GAME OF THRONES with the mindset of Gandhi not to think the khals had it coming (didn’t they figure out what “the Unburnt” meant before this?) and Clarke does triumphant in just the right way, absolutely pleased without seeming smug.

This also may help along the timeline of freeing the slaves, since it’s one thing for the slavers to fight against newly-freed men and women, and it will be quite something else for them to take on a Dothraki horde united behind the Mother of Dragons. In any case, it’s the kind of dramatic spectacle built on solid emotion that is not available in this form anywhere else. GAME OF THRONES once again displays why it’s worthy of so much viewer passion.