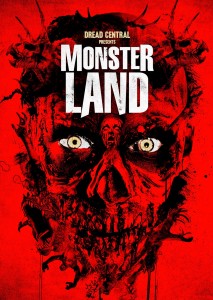 MONSTERLAND is another horror anthology of the type that has come into fashion recently. Bucking the mini-trend, it is not “found footage” in the sense of someone running around recording everything against all reason. Instead, the footage is found by a man who stumbles into a movie theatre during the apocalypse. Despite the fact that there are dead bodies in the lobby and some of the seats, our framing-device guy grabs a bucket of popcorn and settles down to watch the feature, which is called MONSTERLAND.

As these anthologies go, MONSTERLAND is okay. It’s got a couple of spectacularly nutty entries – “Happy Memories” is, per its title, truly memorable – production value is generally good and nothing can be accused of hanging around too long. Unfortunately, the end-of-the-world framework doesn’t pay off in a clever way, which is a frequent though not universal issue with the segments. When we’re given a familiar trope, we expect to see a twist, and we don’t always get one.

The first segment, “Don’t Go in the Lake,” has old-looking college students partying in a lake with dire consequences. It contributes absolutely nothing new, not even a good jump scare, to this particular horror convention, and is pretty much a working example of something that seems to have been done entirely for the purpose of making a short.

The second, “The Grey Matter,” is an agreeably sly, slightly bizarre riff on the zombie genre, where the main character is never sure whether or not he’s hallucinating, and doesn’t over-think his gaping head wound or the fact that he’s very cold to the touch.

“Curiosity Kills” is a sans-dialogue, Fifties-esque tale of an inquisitive boy who accidentally creates a radioactive rat. This seems to be going for a kind of MONTY PYTHON killer bunny humor, but the choreography doesn’t really sell the joke, and unless you are someone who finds exaggerated Fifties stereotypes perpetually hilarious, the environment isn’t especially funny either.

Just when it seems that perhaps the rest of the shorts might not be exploring, “The Hag” comes along, effectively creepy with a great monstrous payoff, though no mythological explanation of what’s happening.

The animated “Monster Man” is amusing, and the psychedelic carnivorous puppet show of “Happy Memories” is the kind of acid-trip nightmare that seems all of a piece with MONSTERLAND’s Seventies grindhouse aesthetic.

“Stay at Home Dad” has a premise that eventually pays off, though it contains a textbook’s worth of anti-feminist male phobias about working mothers and nurturing fathers (if they’re kidding, the jokes land blandly; if they’re not kidding, this is the kind of stuff that most people will find quaint rather than mildly alarming). There is, however, an extremely cute toddler on hand, and some effects that could be dubbed Cthulhu-dorable.

“Hellyfish” is a quick, squishy send-up of the whole giant irradiated creature genre, including TARANTULA and THEM! and encompassing aquatic horror like PIRANHA. There’s a brief set-up and then goes straight into third-act mayhem, with some fun sight gags.

Then we’re back to the framing device. By this time, we’ve worked out from the inconsistent credits (some shorts have them, some don’t) that many of the pieces were made as standalones, then brought into the MONSTERLAND fold. This isn’t necessarily a problem – good for the producers and the distribution company to get some truly independent product out there – but we can’t help wishing the amount of wit matched the gore and visual effects.