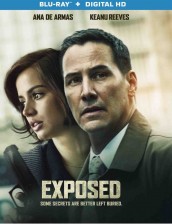 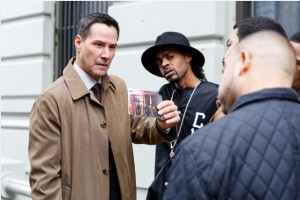 Apparently EXPOSED actually made it to theaters, which after watching it is a bit of a joke to itself.

While it may not have made it to the screens in the U.S., it made it to the U.K. where it made $122. You read that right. $122. It could be a lack of promotion, I don’t remember seeing anything about it promoted.

Could also be because it sucks on so many levels, no one in their right mind would pay money for it. There are essentially two plotlines going on simultaneously. The first deals with Keanu Reeves character trying to hunt down the person that killed his partner. Keanu broods about the entire movie in depressing fashion trying to search for the killer and is vaguely (super vaguely) tied to the other plotline.

The second plotline deals with Isabel (played by the hot as balls Ana de Armas that is a dead ringer for a young Tiffani Amber Thiessen) that begins seeing images of angels, or at least what she thinks are angels, and is driving her passions toward religion.

The issue is this second plotline is completely in Spanish with English subtitles so it feels as if we are watching two separate movies. Plus, the storylines only interchange at the end of the film, the very end, again giving the impression of two films being watched.

I guess you gotta take the good with the bad with Keanu. For every EXPOSED you get a JOHN WICK, for every JOHNNY MNEMONIC you get a STREET KINGS, for every THE MATRIX REVOLUTIONS you get a CONSTANTINE. Avoid this at all costs.

Not a lot on the special features here (which makes sense given how bad this movie is) with just cast interviews and a making of featurette.

Hit me up on Twitter and let me know what you thought of EXPOSED: @peterbrownAX