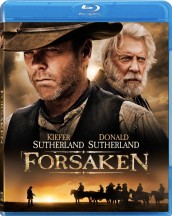 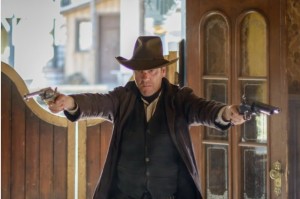 UNFORGIVEN is one of my favorite movies of all time because it paints a picture of bad man trying to go good but he is just soooo damn good at being bad that he falls back into his old ways with the flip of a switch.

FORSAKEN tries hard to be a clone of this storyline (at least in some degree) with Jack Bauer (Kiefer Sutherland), er wait, John Henry Clayton coming home to his father’s town after years of being a gunslinger in the hopes of leading a simple, quiet life away from violence. But come on, this is a Western. All Westerns focus on gunslingers either being bad guys or extracting vengeance/justice/revenge (maybe the one exception is the excellent BONE TOMAHAWK, which actually becomes a Western horror flick). Sure there may be a touchy-feely Western here or there but most of the ones anyone remembers involve violence.

And sure enough, when pushed too far Clayton must return to his old ways after an evil businessman has been putting local farms out to pasture to make way for a lucrative railroad line in the town. Sutherland, joined by his real father Donald Sutherland in the film, does a decent job in the role but he’ll always be Jack Bauer to me from 24.

In fact, I’d love to see them offer up a series where they build a time machine and Bauer gets sent back to various places in time. Jack Bauer in the Old West. Jack Bauer in Middle Ages. Jack Bauer—gladiator. How awesome would that be? I digress. FORSAKEN has good acting, a surprisingly good production and while the storyline is borrowed heavily from other Westerns, it’s worth checking out.

Also of note, Jon Cassar directed this film and you might recognize him from his work on 24 (and a slew of other TV shows) and it is nice to see him branching out to other genres and bringing his friends (Sutherland) along for the ride.

Unfortunately, there is only one featurette on the making of the film in the special features but at least they put something on here rather than just slap the movie and be done with it.

Hit me up on Twitter and let me know what you thought of FORSAKEN: @peterbrownAX