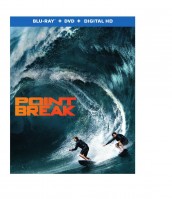 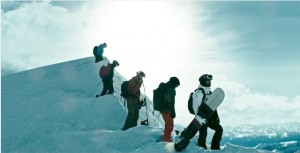 This should probably be called X-GAMES: THE MOVIE because we get just about every extreme sport rolled into one film in POINT BREAK.

I will say, however, that if you are going to do a remake or re-imagining or whatever you’d like to call it, this is the way to go. The original POINT BREAK focused on a group of bank robbers that also happened to be surfers and an FBI guy gains the group’s trust to bring them down from the inside. The same plotline is here but instead of surfers, they are all extreme sports people from snowboarding, to rock climbing, to windsuit diving, to base jumping, to parachuting, to, yes, surfing.

And instead of being just bank robbers they are more eco-terrorists, trying to complete a series of the hardest extreme tests in order to appease what they believe is the Earth calling out to them. Along the way, they decide to hand out diamonds and money to poor folk and blow up materials they believe harm the environment.

Overall, not a bad action flick and like I said I do appreciate the effort to make it a new movie not a shot-by-shot remake, which has doomed other movies. Worth checking out.

Some decent stuff on the special features including four featurettes on how they made the extreme sports scenes, there are a handful of deleted scenes and trailers to the film.

Hit me up on Twitter and let me know what you thought of POINT BREAK: @peterbrownAX