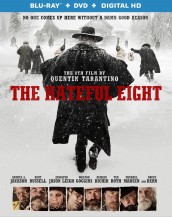 A unique Western that's tongue is as sharp as its bite 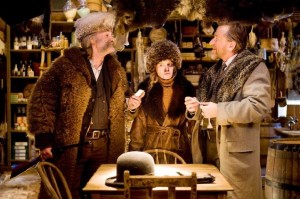 THE HATEFUL EIGHT | © 2016 The Weinstein Company

I love me a good Western. Even those that happen to be filled with more talking than what’s found on the Congressional floor. Of course, that’s what you get with Quentin Tarantino. To say the guy doesn’t like long-winded dialogue is like saying a mouse doesn’t like cheese.

But that isn’t a knock against him. That’s his bread and butter and you know it going in. It worked during INGLOURIOUS BASTERDS a film set in World War II and it works here in a Western about a group of nasty individuals that all find themselves trapped during a terrible blizzard in the middle of the Old West. John Ruth (Kurt Russell) is taking Daisy Domergue (Jennifer Jason Leigh) to a small town in order to hang her for her murderous ways. Along the way he picks up two drifters in the snow, one proclaiming to be a sheriff, Chris Mannix (Walton Goggins), and the other a former army ranger fighting for the North in Major Marquis Warren (Samuel L. Jackson).

When they arrive at an outpost before moving on to the town where they will hang Daisy, they meet another group of characters all who seem to be a bit off and are hiding something. Through a series of long discussions, we learn the truth erupting in a bloody, violent end that only Tarantino can deliver.

THE HATEFUL EIGHT might not be his best work, but it will live long past many of the other films that garnered more attention from last year and that’s a good thing. The soundtrack, which won the Academy Award, is outstanding and worthy of the honor. If you enjoy Tarantino’s other work this too you will find enjoyable despite it being a Western.

Not that much in the special features here just two featurettes on the making of the film with interviews with the cast and crew and another more interesting featurette entitled “Sam Jackson’s Guide to Glorious 70mm” where Tarantino’s love for the wider view film is given.

Hit me up on Twitter and let me know what you thought of THE HATEFUL EIGHT: @peterbrownAX