TV Review: DANCING WITH THE STARS – Season 22 – Week 2 – Hold the presses, Rivera gets the axe 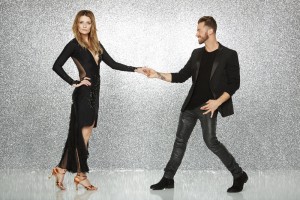 After a dismal debut last week on the premiere of DANCING WITH THE STARS: Season 22, Geraldo Rivera & partner Edyta Sliwinska, to no surprise, exit the ballroom as the first eliminated couple. Meanwhile, Wayna Morris & Lindsey Arnold are killing it, along with Paige Van Zant, who had to dance with a DWTS troupe member this week because her partner Mark Ballas hurt his back in rehearsals. Both couples scored 24 for the night. And in a tie for second, with 21 points, are Jodie Sweetin & Keo Motsepe and Ginger Zee & Val Chmerkovskiy. Now that Rivera is gone, Mischa Barton & Artem Chigvintsev are in last with 15 out of 30.

Paige Van Zant (MMA Fighter) and her partner Mark Ballas
Spunky. Carrie Ann Inaba thought she destroyed the Salsa. Len Goodman said it was the best dance of the season so far. Bruno Tonioli said she was like a volcanic eruption
Scores: Inaba – 8, Tonioli – 8, Goodman – 8, Harland – 8

Von Miller(Super Bowl MVP) (singer) and his partner Witney Carson
He needs to embrace it. Inaba said he is dancing small. Goodman said his Cha Cha had funny bits to it. Tonioli called it good.
Scores: Inaba – 7, Tonioli – 7, Goodman – 6, Harland – 7

Geraldo Rivera (social media star) and his partner Edyta Sliwinska
At least he moved this time. Inaba said he made her laugh. Goodman saluted him. Tonioli said his Salsa was impressive for all the wrong reasons.
Scores: Inaba – 5,  Tonioli – 4, Goodman – 4, Harland – 5

Jodie Sweetin (actress) and her partner Keo Motsepe
She needed to loosen up a bit. Inaba told her to relax. Goodman called her Samba hot. Tonioli said she was getting the taste of dance.
Scores: Inaba – 7, Tonioli – 7, Goodman – 7, Harland – 7

Wayna Morris (Boys II Men singer) and his partner Lindsey Arnold
Gave it his all. Inaba called him the king of the ballroom. Goodman said he was full of excitement. Tonioli said his Salsa had all the right moves.
Scores: Inaba – 8, Tonioli – 8, Goodman – 8, Harland – 8

Kim Fields (actress) and her partner Sasha Farber
Energetic. Inaba was wooing her afterwards. Goodman told her not to hold back. Tonioli said she has so much to offer in her Salsa.
Scores: Inaba – 7, Tonioli – 6, Goodman – 6, Harland – 7

Mischa Barton (actress) and her partner Artem Chigvintsev
Out of time. Inaba told her it was better than last week. Goodman said her Cha Cha had much more content. Tonioli said it didn’t fit.
Scores: Inaba – 5, Tonioli – 5, Goodman – 5,  Harland – 6