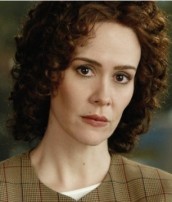 In FX Network’s THE PEOPLE V. O.J. SIMPSON: AMERICAN CRIME STORY, Sarah Paulson plays prosecutor Marcia Clark, who is both horrified and astonished to see what seems at first to be a slam-dunk murder conviction mutate into a media circus and a referendum on gender, race and class.

At more or less the same time that Paulson was working on AMERICAN CRIME STORY, she was also working on her fifth season of FX’s AMERICAN HORROR STORY – playing a different character each year, she’s gleaned three Emmy nominations for the series. Both series come from executive producer Ryan Murphy. Florida native Paulson’s other recent work includes the films CAROL and 12 YEARS A SLAVE.

AX: So is AMERICAN CRIME STORY like AMERICAN HORROR STORY, in that they’re both going to be anthologies?

SARAH PAULSON: Oh, I thought you were [going to say], “Is AMERICAN CRIME STORY an actual American horror story?” And I’d say the answer is, “Yes.” We made jokes like that on set. I’m like, “Maybe they should change titles. This could be AMERICAN HORROR STORY Season 6.”

PAULSON: Well, I know [Ryan Murphy has] talked about Season 2. He talked about that in the Hollywood Reporter, about what it would be – Katrina.

AX: Can you do another year where you’re running back and forth between AMERICAN HORROR STORY and AMERICAN CRIME STORY?

PAULSON: If I get really lucky, I would like to do it.

AX: No wonder everybody on AMERICAN CRIME STORY is saying you’re the hardest-working person they’ve ever seen.

PAULSON: Well, I spent a lot of years not working very hard, because nobody asked me to show up anywhere, so now I just feel like I want to play for as long as someone wants me to, so …

AX: Do you have more enjoyment, or less enjoyment, playing the AMERICAN HORROR characters, who are fictional, versus somebody like Marcia Clark, who’s a real, living person, where there’s a lot of research to be done?

PAULSON: I think it’s a bigger responsibility to play a real person. The responsibility feels really enormous. I can make up whatever I want and support every choice I make if it’s fictional, if I’m inventing it, or the writers are inventing it. Marcia Clark is not an invention, so it’s a heavier burden to carry.

AX: Do you like that feeling of responsibility, or is it simply scary?

PAULSON: It’s scary, but it also made me work really, really hard, because the last thing I wanted to do was have Marcia be disappointed.

AX: Doing THE PEOPLE V. O.J. SIMPSON, have you learned anything about racism, sexism, classism …?

PAULSON: I actually learned about my own sexism, because I for one – I was very young, and nineteen at the time, but I didn’t stand behind Marcia Clark. I believed everything everyone was saying about her, all the sort of quippy, completely surface, image-based opinions, where the word “ambition” was categorized as a negative, whereas in a man, you would never say it was negative. I don’t think as a woman at that time I supported her enough, even mentally or energetically. I don’t think women did in general. So I did learn about my own limitations as a person.

AX: Does Clark’s opinion of what’s happening change over the course of the trial?

PAULSON: I think she becomes more and more aware that the jury might have already made their decision, and that she’s really fighting a very, very serious uphill battle. At the beginning, she feels it’s open and shut. They’ve got all the evidence, what more can anyone need to know?

[At this moment, director John Singleton comes up to greet and praise Paulson, telling the reporter what a wonderful job the actress does. Paulson reciprocates, lauding Singleton’s direction.]

AX: How hard do you think it was for Clark to stay in the legal system after all of this happened?

PAULSON: She didn’t. She practices appellate law now, which means she no longer goes in front of a jury, and she writes crime fiction novels. She never prosecuted a case again, and this is from a woman who won nineteen out of twenty cases before this, which was her twenty-first case. And so she won far more frequently than she lost. She only ever lost one case in that position.

AX: What would you most like people to know about PEOPLE V. O.J. SIMPSON?

PAULSON: That it’s not at all what people expect, and that if you think you know the story, you don’t know the half of it.

This interview was conducted during FX Network’s portion of the most recent Television Critics Association press tour in Pasadena, Calif.