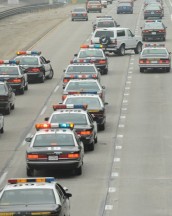 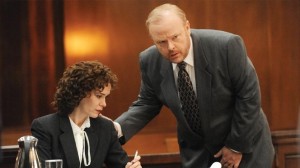 In 1994, if you were alive, in America and had access to the news, you knew that former football star O.J. Simpson was accused of killing his wife, Nicole Simpson Brown, and her friend Ronald Goldman. You probably also knew about the highly-publicized trial that ensued.

THE PEOPLE V. O.J. SIMPSON, based on Jeffrey Toobin’s nonfiction book about the case, was developed for television by Scott Alexander and Larry Karaszewski. Karaszewski and Alexander have written some fictional films – they adapted Stephen King’s 1408 – but they have also scripted a lot of fact-based fare, including ED WOOD, THE PEOPLE VS. LARRY FLYNT and BIG EYES.

Karaszewski talked with Assignment X about why he and Alexander decided to tackle such a well-known piece of modern history.

LARRY KARASZEWSKI: That is funny. It is weird that subconsciously we didn’t realize that so many of our scripts do have trials in them. Even BIG EYES last year, the movie about an artist [Margaret Keane, as played by Amy Adams], ends with a trial. We’ve always done movies, and we’ve always done movies based on true-life stories, and we’ve never done television before. [Executive producers] Nina Jacobson and Brad Simpson came to us with Jeffrey Toobin’s book, and it was one of those things where, literally, the second we heard it, we were like, “Yes, we’re in.” We knew that we’d never do O.J. as a movie, because that would be just two hours, and you’d just be telling people stuff they already know. But as a ten-hour thing, it gives a whole new way of telling a story. It’s one of those things where, for us, what was interesting about the O.J. trial wasn’t the stuff that we all remember and know, it’s the weird undercurrents that were underneath it. So having ten hours, we can sort of tell a gigantic-canvas story.

AX: So the ten-hour format allows you to tell a more detailed story?

KARASZEWSKI: Yes. Because Episode Six, for example, is all about Marcia Clark and being a woman prosecutor, and being judged differently than the men are, and having to deal with the fact that she turns on the TV and people are talking about her haircut. Or the focus group thing, [with strangers saying] she should be a little less harsh. That’s something we would never be able to do [in a feature film], and we’re getting just to the nitty-gritty of the trial. It allowed us to explore the LAPD and race relations in Los Angeles, the birth of twenty-four-hour media, the beginning of reality television, someone like Kato Kaelin can be looked at as one of the very first reality stars. So we could work each episode into kind of a theme that would allow us to do these things. We compare it a lot to movies of the mid-Seventies, like the way Robert Altman would make a movie, where everybody [in the movie] thought they were the star.

AX: Did anything you learned in writing the miniseries change your opinion on anything you thought you knew about the case?

KARASZEWSKI: Oh, it sounds stupid to say this, but everything. Because people who lived through the trial have very preconceived notions of who all those people are, and what’s been great about this show is, by trying to find the humanity with everybody. If you think Johnnie Cochran was just somebody who made rhymes and wore fancy suits, you’ll find out that he’s a guy who really believed and fought for a cause. If you think Chris Darden [a member of the prosecution team played by Sterling K. Brown] was incompetent or an Uncle Tom or any of this, you’ll find out he has very sincere beliefs. The same thing with Marcia Clark. Every one of these characters has a very interesting and sincere thing that they are trying to do. And that’s what we discovered, that’s what we were trying to do, find the humanity underneath these characters.

AX: Were there any places in the story where you went, “We need to find out something else to fill this space,” or was it a matter of cutting things down, even with the ten hours?

KARASZEWSKI: It was cutting down. There was so much stuff. Going back to what we were able to do, there’s one episode late in the series, which is all told from the jury’s perspective. That’s one of those things that no one really considers, what their lives were like when they were put up at a hotel for nine months and couldn’t speak to other people. But there were a lot of things we couldn’t get in, because otherwise it would go on forever.

AX: How was working with executive producer/director Ryan Murphy, who created the AMERICAN CRIME STORY umbrella?

KARASZEWSKI: Ryan was great. We [Karaszewski and Alexander] don’t know television. We only know movies, so we wrote a ten-hour movie. And he fell in love with the scripts and really, in a great way, was a facilitator. He got these people to allow us to do this vision on a scale that I don’t think we would have been able to do if we were on our own, and also, he’s a master of casting. He did an amazing job finding the right actors for all the parts.

AX: Did any of the actors come to you with notes or changes or questions?

KARASZEWSKI: Well, it’s one of those things where they all had questions. But I think it’s one of the reasons why Scott and I have always gravitated to these true-life stories. We noticed early on in our career that when we wrote a family comedy, no one really cared what you thought, but when we wrote THE PEOPLE VS. LARRY FLYNT or we wrote these other movies, ED WOOD, all of a sudden, when actors or costume designers or production designers had a question, like, “What did Bela Lugosi’s house look like?”, they’d have to come to us, so we were sort of more like the historians, or the journalists, and so we enjoyed that, and in this show, we continued with that. If they had questions about what the real F. Lee Bailey [played by Nathan Lane] was doing at that time, or what Dominick Dunne was going through in his life, they could always come to us and we could tell them what was happening.

AX: Do you and Scott Alexander have any other projects going on right now that we should know about?

KARASZEWSKI: We’re doing a movie with Nina Jacobson and Brad Simpson about the Patty Hearst kidnapping, and we’re just starting to write it right now.

AX: And what would you most like people to know about THE PEOPLE V. O.J. SIMPSON?

KARASZEWSKI: I’d like people to know that you don’t know the whole story, and to just sample it. I think people are going to be pulled into the story again. It’s one of the defining moments of our time, and we loved writing it.

This interview was conducted during Fox Network and FX Network’s party for the Television Critics Association press tour in Pasadena, California.