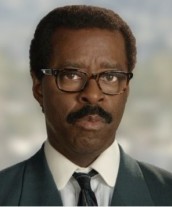 © 2016 FX
Courtney B. Vance as Johnnie Cochran in THE PEOPLE VS. O.J. SIMPSON
Interviews

The actor talks researching the part, working with Ryan Murphy and more 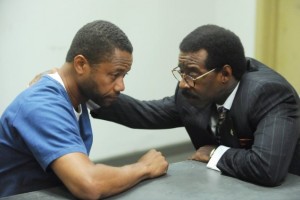 FX Network’s THE PEOPLE V. O.J. SIMPSON: AMERICAN CRIME STORY, Tuesdays at 10 PM, is a ten-episode drama about the famous ’90s court case that had racism, sexism, celebrity and courtroom game-playing on full public view. One of the more memorable participants in those events was the late defense attorney Johnnie Cochran, who epitomized the combination of canny strategy and showmanship. Whatever Cochran privately thought about Simpson’s innocence or guilt, he saw the case as an opportunity to spotlight police abuse of African-Americans.

Cochran is portrayed in the miniseries by Courtney B. Vance. Vance, a veteran of stage (Tony winner for the original production of LUCKY GUY, Tony nominee for the original productions of FENCES and SIX DEGREES OF SEPARATION), film (PANTHER, SPACE COWBOYS, TERMINATOR: GENISYS) and television (LAW & ORDER: CRIMINAL INTENT, FLASHFORWARD, MASTERS OF SEX), often plays people who have more straightforward, sober demeanors than Cochran does in PEOPLE.

Vance says of Cochran, “He doesn’t mince words. At the same time, he has a great time. Someone said he’s about three different agendas going at any one time, and you loved him and hated him, but you had to respect him, because he was the man in this area. He cut his teeth on the police brutality case.”

AX: Before this project came along, did you ever think that you might want to play Johnnie Cochran?

COURTNEY B. VANCE: Never even crossed my mind. I never would have thought it. I didn’t think I looked like him. I had no idea. It wasn’t until I put that wig on that I actually saw him within me. So I just read and read and read and read, because I knew once I got on that set, I was going to try to draw from things and be able to synthesize, and figure it all out, but it took me a minute to realize, “Wait, wait, I got this, all right, let’s go. Let’s ramp it up now.” I was ready to ramp it up.

AX: Had you and PEOPLE V. O.J. SIMPSON executive producer Ryan Murphy been looking to work together on something? Your wife Angela Bassett has now done three seasons of AMERICAN HORROR STORY with him …

VANCE: No. We hadn’t been in talks about anything, but he’s always seen me over at her events and her premieres, so I know if there was something that could come along that I was right for, I’d be right there, because he knew me and knew my work, and he sees me all the time, at all the major events.

AX: What was your impression of the Simpson case at the time that it was happening?

VANCE: I didn’t really have an impression of it. I saw the Bronco chase, and then when I saw that it was on every channel, and people were obsessed by it, I couldn’t do that. Much like when 9/11 happened, I couldn’t watch it all day long – I couldn’t watch it over and over and over again. I had to let it go and do something else and come back. My wife, on the other hand, sat there for twenty-four, forty-eight hours, just watching, over and over. I had to go and come and go. For me, that was what I needed to do to be able to deal with it, because I think it was just overwhelming to me, that here’s this [gestures with his hand, indicating a high level of status for Simpson] and now he’s down here [indicates low level], potentially.

AX: Did you learn anything about Johnnie Cochran that affected your playing of him?

VANCE: Everything. I knew nothing about him, so [the research] is all upside, but I was just intrigued by – he was just completely human, he was completely flawed, he had two families, he was carrying on a whole other family for about ten, twelve years, but still was able to function, and when confronted by it, he said, “Oh, come on. We’re talking about somebody who’s on trial for his life. Two people were killed. Let’s leave [the defense attorney’s private life] alone. It’s life.” And the reporters just went, “Oh.” And they went back to trying to figure out the trial and let him alone about it. So he dealt with it, he figured it out in private, he and his wife and mistress, and life went on.

VANCE: Both. But again, it wasn’t on him to prove anything, and it wasn’t his fault that it was on television. That was [Judge Lance] Ito’s call. So you put it on television, Ito, all right. You’ve released me right into my element. And if there ever was a human being that was made for television, it was Johnnie Cochran. Look at all the suits that he had. He was ready.

AX: Do you enjoy playing a more flamboyant character? Because you’re often cast as a pretty down-to-Earth person.

VANCE: It’s a nice change, a nice change of pace. I mean, who wouldn’t relish the opportunity to get in Johnnie’s shoes, literally? But at the same time, you’ve got to be ready for that six-page monologue, and being able to navigate in that legalese area that he did with as fast as we were working. Looking back on it, I wouldn’t want to do it again.

AX: Was there anybody you were particularly excited about working with on this show?

VANCE: Everybody. I’d never worked with David Schwimmer [who plays Simpson’s friend and lawyer Robert Kardashian], but I’d seen his work before, I was a big fan, and John Travolta [who plays defense attorney Bob Shapiro] and Cuba [Gooding Jr., who plays Simpson] and Sarah [Paulson, who plays Marcia Clark], of course, I’ve seen and known a lot. Evan Handler [who plays Alan Dershowitz] and I did SIX DEGREES OF SEPARATION twenty, twenty-five years ago, Rob Morrow [who plays Barry Scheck], Nathan Lane [who plays defense attorney F. Lee Bailey] – he and I worked about fifteen, twenty years ago on BOYS NEXT DOOR – everyone was just so happy.

VANCE: After the six months with this project, I was just exhausted – sixteen-hour days, six days a week, I needed to rest, so I said, “Let’s rest, let’s leave it open.” I’ve got a couple meetings coming up, and I’m sure things will be starting to ramp back up as this gets released.

AX: And what would you most like people to know about PEOPLE V. O.J. SIMPSON?

VANCE: I want people, [as a result of] this project, to begin to talk about these issues. These men and women that are being killed, choked and shot and beaten, this is not the 1930s and ‘40s or the KKK. The world sees this and looks at us and goes, “What is wrong with you all? And you’re going to come out here and talk about us?” So I just hope that we can look at it and we do the adjustments that we need to make to stop it. People are people. It’s human beings. You don’t shoot a person sixteen times. You don’t do that.

This interview was conducted during Fox and FX Networks’ party for the Television Critics Association press tour in Pasadena, Calif.