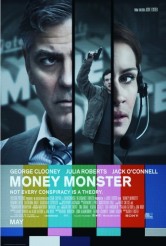 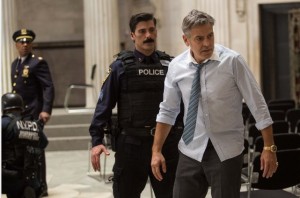 MONEY MONSTER is almost always entertaining, even when it gets predictable, improbable, or some combination of the two. As movies about the workings of Wall Street go, it has the misfortune to be following THE BIG SHORT while that film – last year’s Oscar winner for Adapted Screenplay – is still in people’s memories. MONEY MONSTER also seems to feel, like its troubled antihero, Kyle Budwell (Jack O’Connell), that the only way to get people to listen to a complaint about what’s wrong with the financial industry is to brandish a gun and a bomb, and that if one looks hard enough, there are specific villains to be named.

It’s clear that MONEY MONSTER does want to indict the system, but it gets sidetracked, along with Kyle, by plot expectations. The set-up is this. “Money Monster” is the title of a popular financial advice show on cable, hosted by the glib, gimmicky Lee Gates (George Clooney). Lee’s fed-up producer Patty Fenn (Julia Roberts) is about to take a job with another show, but she’s in the booth the day the distraught Kyle sneaks into the studio, armed and dangerous. Kyle took Lee’s advice about an investment that tanked, and he is now dead broke as a result. Kyle threatens to shoot Lee, and blow up the studio for good measure. He wants some answers. Lee, trapped on camera with a gun to his head, and Patty, trying to avert disaster, try to find out exactly what happened with that supposed sure-thing investment.

There’s a kind of meta-joke at work here in essentially stating that perhaps the only way to get a movie audience to sit still for a discussion of how the stock market works is to train a gun on them. The irony here is not so much that other films have managed this, but that MONEY MONSTER rather quickly moves away from this point. After bringing up the issue of how quickly and non-humanly stock transactions are often handled, and explaining it well enough for us to wonder how this will be handled dramatically, the movie shifts gears to a scenario of a much more specific, intentional and less universal matters. Yes, the system is set up in ways that allows for abuse, but this is a little like a story that promises to explore the way banks function and then tries to make its point by pivoting on a heist.

Even so, if one shrugs off the bait-and-switch aspects of the storytelling, there’s a lot of enjoyment to be found here. The screenplay by Jamie Linden and Alan DiFiore & Jim Kouf, based on a story by DiFiore & Kouf, has wit and energy. Additionally, there are a couple of great unforeseen reversals (kudos to actress Emily Meade for what she does with one of these). Director Jodie Foster gets a lot of warmth from her actors and is especially good at finding the humor in what might be termed dark slapstick.

Clooney, despite the fact that his character is meant to at least start out as a glib jerk, has his usual charm. Roberts exudes a mixture of doggedness and sweetness that makes her producer both plausible and likable. O’Connell lunges into Kyle’s fury and desperation with conviction. Lenny Venito also makes a strong impression as a matter-of-fact camera operator who puts professionalism above safety.

MONEY MONSTER has a few moments where it seems like we’re actually about to learn something. Mostly, though, it’s a thriller seems to want to make us think, but prefers to deliver on its ride.