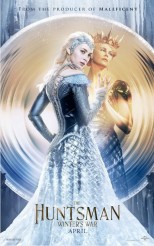 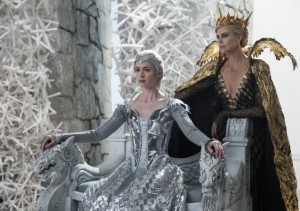 THE HUNTSMAN: WINTER’S WAR is being billed as a prequel to 2012’s SNOW WHITE AND THE HUNTSMAN, but it’s actually a wraparound, beginning before the earlier film, then jumping ahead to seven years later. It’s a decent enough fantasy adventure on its own terms, though despite the title, the real star here isn’t so much Chris Hemsworth, reprising his Huntsman role, but Emily Blunt as Freya the Snow Queen. Arguably, both they and everyone else are eclipsed by Colleen Atwood’s astonishing series of costumes for the movie’s royalty, so consistently opulent and varied and stunning that they steal all the scenes in which they appear.

For those who missed SNOW WHITE AND THE HUNTSMAN, the quick recap is that evil Queen Ravenna (Charlize Theron) sent her Huntsman (Hemsworth) to kill Snow White. The Huntsman switched sides and helped secure the throne for Snow White, and Ravenna was apparently killed in the process.

As THE HUNTSMAN: WINTER’S WAR begins, the soothing (and uncredited) narration by Liam Neeson takes us to events before SNOW WHITE. We see Ravenna in the process of murdering her way to queendom. Her younger sister Freya has a gentler soul, but when tragedy occurs, Freya’s grief and fury unless her frost-related powers. Freya goes off to establish her own kingdom in the North. She arranges for huge numbers of village children to be kidnapped, brought to her and trained into an elite army of Huntsman. There is one rule: no love. Love, Freya insists, is an illusion that only brings betrayal and pain. However, the two best huntsmen, Eric (Hemsworth) and Sara (Jessica Chastain), break that rule. Freya is not happy.

Flash forward to seven years after the end of SNOW WHITE. Freya has extended her reach in the North, while in the South, Snow White now rules in Ravenna’s stead with her loyal consort William (Sam Claflin). Huntsman Eric lives in solitude, broken when dwarf Nion (Nick Frost, returning from the earlier film) and his kinsman Griff (Rob Brydon), track him down at William’s behest. It seems that Ravenna’s Magic Mirror has been stolen, and given the ill effects it seems to have on those under its influence, the kingdom may be in danger if it is not recovered. Eric grudgingly rises to the occasion, with help from the dwarves and some unexpected companions.

Hemsworth is reasonably charming as Eric, who is mostly in a good mood and actively trying to be likable, although his Irish accent is a bit odd. Theron once again makes a supremely evil (and supremely clothed) villain. Chastain, also with a slightly peculiar Irish accent, is as persuasively kickass as we’d expect. Frost and Brydon add some verbal lightness as the male dwarves, and Sheridan Smith steals a few scenes as the bold, acquisitive dwarf Mrs. Bronwyn.

Still, the performance and characterization that gives WINTER’S WAR some heft is Blunt as Freya. The actress plays her role as a tragic Shakespearean heroine, driven to madness in her pain, and therefore never cruel by her own lights.

The screenplay by Evan Spiliotopoulis and Craig Mazin is workmanlike. It gets from one adventure to the next easily enough, and if we’re never convinced the central romance is one for the ages, neither is it unpalatable. Yes, parts of WINTER’S WAR resemble FROZEN, but since the centuries-old story THE SNOW QUEEN is the inspiration for both and the two films differ substantially, comparisons are minor.

The script does tease some things that never come to pass (we’re made to anticipate the mirror doing much more than it does) and omitting some others that will be more striking to the viewers of the earlier film than those coming fresh to the universe (such as how Freya either turned a blind eye to Eric working for her sister, or failed to learn of it altogether). Then there’s the matter of having the climax hinge on the revelation of something most of the audience will have worked out much, much earlier.

Director Cedric Nicolas-Troyan has a lot of fun with the snowy landscapes, icy magic and malice that takes spills out in physical form. Most of the CGI is very handsome, though occasionally a notion outstrips its execution (one example being the giant beast that Freya rides).

THE HUNTSMAN: WINTER’S WAR is sturdy, if predictable and a bit flawed. For fantasy fans who aren’t too demanding, especially those hoping the power of suggestion will help them escape the unseasonal real-life heat wave, it’s a good enough reason to go to the movies.