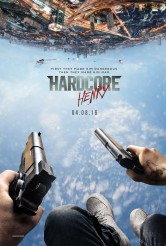 Even viewers who came unscathed through the camera moves of, for instance, THE BLAIR WITCH PROJECT and CLOVERFIELD may exit HARDCORE HENRY feeling like they’re disembarking from a rough ocean voyage. The film was shot with body-cam and handheld GoPros to emulate the p.o.v. of a first-person shooter. However, the problem with this science-fiction/fantasy/action thriller isn’t so much that it’s shot like a videogame, but rather that it’s plotted like one, and not an especially inventive one at that.

The central conceit of HARDCORE HENRY is that we experience everything from his point of view, starting with him being partially reassembled with a new arm and a new leg in a lab. The person who identifies Henry and reassuring him while putting him back together is his lovely wife Estelle (Haley Bennett). Henry has suffered memory loss, Estelle explains.

Then the lab is invaded by diabolical and telekinetic aspiring warlord Akan (Danila Kozlovsky). Henry is on the run on the streets of Moscow before he can even get his voice installed, and Estelle is abducted. Unexpected help comes in the form of Jimmy (Sharlto Copley), who seems to know Henry, even though Henry doesn’t recognize him.

This kind of set-up could go any which way. Here, it goes loud and bloody and sort of fast, though since Henry races from place to place without either him or us being invested in the environment, it starts to feel like a slog.

There’s a lot of inventive splatter and some good action that might play even better if we could see it more clearly. Given that Moscow is still a fairly exotic locale to most U.S. theatergoers, it seems a shame that HARDCORE HENRY doesn’t make better use of the environments, which here look and play mostly like gaming environments (there’s a door, here’s a hallway, that way is a rooftop with access to the ground). Most international audiences would find this city exotic, but for all the use made of it, most of the movie could have been shot in Culver City.

It seems that the target audience here would be hardcore gamers, except that most gamers would rather play than watch while unable to participate for ninety-some minutes. For non-gamers, there are plenty of game scenarios that would make for wonderful films. This isn’t one of them. Once we get to what’s actually happening, the bare bones of the narrative would just about pass muster as a single episode on a sci-fi procedural, and even the worst of those have some kind of characterization from their leads. Apart from obviously being put-upon, bewildered and angry, there’s not much to go on with Henry. He wants to rescue Estelle, which is good, and he keeps shooting at people who are trying to kill him, which is understandable, but that’s about it. Copley has an extremely multi-faceted character, but (through no fault of the actor) it’s more broad than it is deep. Some surreal bits of humor with him put us in mind of some of the more eccentric fare from the Sixties and Seventies.

Kozlovsky’s villain is so annoying that most viewers will want to kill him themselves, but this is less skillful character-building than it is a) resorting to tropes (if this moron would just keep his mouth shut, he wouldn’t have the backlash he engenders) and b) unexplained/unearned genre shifts. Bio-engineered soldiers are one sort of storytelling. Human telekinesis is a different sort, and the two don’t naturally go together, especially when there’s nothing else in the narrative to support the magic.

It should be noted that women are treated strictly as prizes and props, but this is unlikely to be anyone’s only issue with the movie. HARDCORE HENRY earns its title in terms of action and gore, but unless one is truly able to invest in an unplayable game with a flat narrative, it also becomes cumulatively hardcore in terms of boredom.