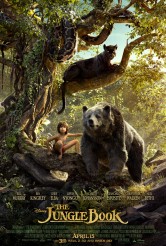 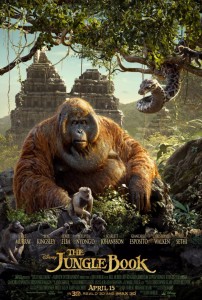 For those familiar with THE JUNGLE BOOK, via the animated 1967 Disney version, any of the other multiple film adaptations, the original Rudyard Kipling books, or some combination thereof, there is something indelible about the story. Mowgli, a little boy raised by wolves in a jungle in India, is completely at home in the wild, but when the tiger Shere Khan announces he wants to kill Mowgli, the panther Bagheera decides the only place the child will be safe is with his own kind, in the human village.

This touches off a trek through the jungle, where Mowgli has adventures with the friendly and upbeat Baloo the bear and meets the monkey tribe of the Bandar-Log, has a scary encounter with Kaa the python, and a final reckoning with Shere Khan.

All of these touchstones are present in the new edition of THE JUNGLE BOOK, handsomely directed by Jon Favreau from a screenplay by Justin Marks. Mowgli, played by a winning Neel Sethi, is a boy who knows what he wants, and he doesn’t want to leave his wolf pack family.

Much is being rightfully made of the extraordinary CGI that brings life to Sethi’s animal cast mates, not only the expected wolves, panther, tiger, bear, monkeys and giant python, but also cool touches like a pangolin and a porcupine and big-eared mice. The movement, appearance and texture are all so lifelike that we never question the animals’ physical presence in real space, and the interaction with the live-action Sethi is seamless.

The one place where the technical side is slightly off is in a problem that has been plaguing motion-capture photo-realistic humans for a good while now: the eyes. In what seems like an effort to give the talking animal characters more immediately identifiable emotions, their eyes have been subtly humanized. Instead of producing the desired effect (at least for this viewer), it often just seems not quite right, distractingly not quite bear- or panther- or wolf-like. The arguable exception is the orangutan King Louie – giving him bright blue eyes just makes him that much more eccentric and scary.

There are some reprises of musical numbers from the 1967 feature, so Bill Murray, voicing Baloo, and Sethi jam on “Bare Necessities,” and Christopher Walken, voicing Louie, makes His Bananas Majesty that much more frightening by singing “I Wanna Be Like You.” Those who stay through the delightful closing credits also get Scarlet Johansson’s take on “Trust in Me.”

This JUNGLE BOOK is consistently entertaining and smart. The best part about it is not even its spectacular visuals, but the ways in which the filmmakers have intelligently and empathetically dug deeper into the story. Shere Khan (voiced with calm conviction by Idris Elba) is now not simply a villain; he has reason backing up his point of view. Events that were once the product of coincidence are now the result of well-developed cause and effect. And – how to put this without spoiling things? – the world view of the 21st century is quite different in significant respects from that of Kipling’s time, or even 1967. The moral of this telling of the tale will simply please children who are new to it (and parents of sensitive young ones should bear in mind that there is fatal violence and fire, albeit bloodless), but those old enough to compare and contrast may be especially heartened to contemplate how far we have come.