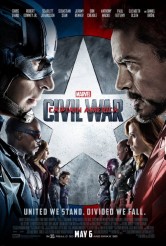 Philosophical as well as physical

Awhile back, HIGHLANDER: THE SERIES show runner David Abramowitz described that enterprise as “a Talmudic discussion with ass-kicking.” That assessment frequently springs to mind while watching CAPTAIN AMERICA: CIVIL WAR. The movie, the latest in Marvel’s cinematic universe (aka the MCU), unfolds with reasonable logic after the events of 2015’s AVENGERS: AGE OF ULTRON.

The world is already troubled by the fact that the Avengers, although they saved more people than they harmed, still racked up substantial civilian casualties when the country of Sekovia became unmoored from the rest of planet Earth. On a mission in Nigeria to stop a terrorist (Frank Grillo) seeking to get his hands on a bio-weapon, Steve Rogers/Captain America (Chris Evans) and his team accidentally take out a building.

The United Nations, including the U.S., think some oversight is in order. That august body wants the Avengers to sign accords that are essentially a contract saying the superheroes will deploy at the behest of the U.N., and only then.

Tony Stark/Iron Man (Robert Downey Jr.), who wasn’t in Nigeria, is negotiating his own guilt over Sekovia and, after a lifetime of rebellion, is thinking it might be time to let someone else make the tough choices. Steve, who has been accustomed to siding with the government, sees how this could go terribly wrong. When another tragedy strikes and Steve’s old friend Bucky Barnes/the Winter Soldier (Sebastian Stan) is the key suspect, the only way for Cap to keep his pal alive and find out what’s really going on is for him to go rogue. Tony and some of the other Avengers are afraid Steve will get himself killed, while another set of Avengers agree with the Captain. A few extra superheroes join the fray for good measure.

The stakes keep climbing, though one of the high points of CAPTAIN AMERICA: CIVIL WAR is a fight among friends who are simply trying to contain one another rather than do real harm – it’s an intentional hoot that also addresses a multitude of those matchup questions (who’d win if Iron Man fought Captain America, etc., etc.).

Still, that whole who-is-going-to-wind-up-versus-whom issue requires some obvious labor; we can see the wheels turning with a little too much effort to get some of the challengers into position.

What will be intriguing to some and annoying to others is that the movie is genuinely interested in its topic. CAPTAIN AMERICA: CIVIL WAR is something like a fantasy version of EYE IN THE SKY, with people who have real power debating issues that are the fantasy equivalent of drone strikes – who should get to call them and when, if ever, and under what circumstances are they justifiable? Do the agents of force know their own strength and are they the best judges of when to use it?

Unfortunately for those of us who are invested in the Talmudic discussion (ass-kicking included), the film has to shift some gears to get to the climax it wants, so that the resolution winds up hinging on a different type of moral matter. It seems there might also be more to be made of Steve and Tony winding up not only on different sides from one another, but taking positions counter to their personal norms. Then again, there’s only so much that can be fit into the 146-minute running time.

Standouts in the sizable cast are Evans, a thoughtful Downey and a charismatic Chadwick Boseman as an African prince who has his own superhero identity. The action is usually inventive and impressive, though the most startling and awe-inspiring special effect is somehow getting Downey to appear to be in his teens for an extended fantasy flashback sequence.

CAPTAIN AMERICA: CIVIL WAR expects a certain amount of familiarity with the Marvel Comics Universe mythos. If someone happens to wander in off the street, they’ll still be able to follow what’s going on, but it helps to come in caring about these people. The movie does wander off-topic just a bit at moments, but for the most part, this is a superhero epic with something real on its mind and the chops to present it well.