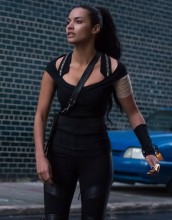 The actress talks behind-the-scenes her character of Tabitha Galavan 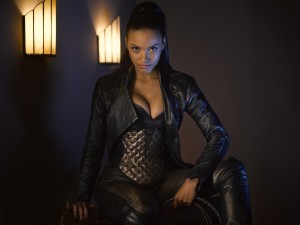 In Fox Network’s Batman prequel GOTHAM, now in its second season Mondays at 8 PM, Jessica Lucas plays Tabitha Galavan, aka the Tigress. Tabitha is not quite so mad or driven as her already-ruthless and now resurrected brother Theo [James Frain], but she has no qualms about killing and she’s very handy with her whip.

Lucas, originally from British Columbia, Canada, has appeared in a lot of genre fare, including the films THE COVENANT and CLOVERFIELD, starring in the EVIL DEAD remake and in the TV series CULT. She was also a regular on the revival of MELROSE PLACE and the recent GRACEPOINT.

AX: GOTHAM explores Bruce Wayne as a teen before he becomes the savior of Gotham City. Did you have any kind of opinion about Batman before this? Were you a fan?

JESSICA LUCAS: I love Batman. He’s my favorite superhero. And I’ve seen all the Christopher Nolan movies, I grew up on the Joel Schumacher movies, and I loved Michelle Pfeiffer as Catwoman, so yeah, I was a big fan.

AX: Is Tabitha Galavan/Tigress in the comics, or is she original to GOTHAM?

AX: What did you have to learn to do to in order to play Tabitha? Did you already know how to do whip work, did you take lessons …?

LUCAS: I have always been very athletic, I grew up playing sports, so that really helped me a lot. But the whip work was sort of learn on the fly, rely a lot on the stunt team, there’s a lot of CGI help as well. But no, I had to learn all that from scratch.

AX: What else did you have to learn?

LUCAS: How to walk in a corset, how to move in a corset, because there are a lot of stunts, and I’m strapped in. But no, it’s mostly the physical aspect. There was a big action sequence that Sean Pertwee [who plays Alfred Pennyworth] and I did awhile ago that was intense, and that was a lot to learn.

AX: Are fantasy/sci-fi/horror genres that you especially like, or is that just where you’re finding a lot of work?

LUCAS: I enjoy watching all the genres. I’m surprised I ended up in this sort of a genre, but I’m happy, I embrace it. If that’s what people want to see me do, I’m happy.

AX: But, for instance, do you want to do comedy?

LUCAS: Of course. And actually, I have. I did a comedy on NBC five years ago called FRIENDS WITH BENEFITS, and I did GRACEPOINT on Fox last year, which was [a mystery drama].

AX: Is there anything specific you’ve learned from past jobs that help with working on GOTHAM?

LUCAS: If anything, I would say the thing that I am loving about this is not having the stress and anxiety of knowing if the show is going to continue [GOTHAM has been renewed for a third season]. I think launching a show is one of the hardest things to do, and finding an audience is so hard. It was really nice for me to come into a show that already had that. So I can just focus on acting and not think about anything else.

AX: What do you enjoy most about playing Tabitha?

LUCAS: Just the action and the stunts, something I never thought that I’d get to do. That’s been fun, and I really like the team, I like the crew. Everybody’s so seasoned and been around for so long, it’s just really easy to step into that group of people and work.

LUCAS: That there’s more craziness to come, and the actors are wonderful, and there are going to be some arcs and new characters that are exciting as well.