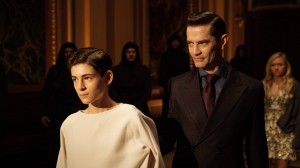 In Fox Network’s GOTHAM, which just aired its winter finale, Bruce Wayne is a young teen who is not yet Batman, though he gives every indication that he will be one day. David Mazouz, however, has thoroughly embodied Bruce from Day One of the dark series, adapted by Bruno Heller from the D.C. Comics.

Los Angeles native Mazouz (first name pronounced Dah-veed), now age fifteen, had previously starred as the preternaturally gifted son of Kiefer Sutherland’s character on two seasons of Fox’s TOUCH. The audience could hear his thoughts, but he only spoke aloud to other people at the very end of the series.

ASSIGNMENT X: When you first got GOTHAM, were you relieved to have a part where you were allowed to talk to your fellow actors onscreen?

DAVID MAZOUZ: Yeah, that was nice.

AX: Congratulations on Season 2 of GOTHAM. Can you tease any changes coming up for Bruce?

AX: Because it seems like Bruce is going to get more physical, and the character is not particularly skilled at it to begin with, did you have to do a lot of fight training?

MAZOUZ: No, actually. I didn’t have to do anything like that. He will start to get a lot more physical, especially by the end of Season 2. You’re going to start to see him training with Alfred. We don’t really get scripts until right before we shoot them, so I don’t even know that much about it, but I know that Bruce will be training throughout this season, so probably I will have to do some training outside of the show later on.

AX: But you already kind of knew how to throw a punch and take a punch on screen?

MAZOUZ: Yes. I haven’t had any training with that, but it seemed pretty real.

AX: Is there any particular thing you’re looking forward to, like Bruce getting to drive?

MAZOUZ: Yeah. That would be awesome.

AX: Since he’s inherited the considerable Wayne fortune, he’s going to have a good car, no matter what …

AX: What do you want him to drive?

AX: How do you think Bruce views his relationships with Alfred and with Gotham City Police Department detective Jim Gordon, played by Ben McKenzie?

MAZOUZ: The thing about Alfred is, in Season 1, Bruce is constantly saying, “I want to go out and do things on my own, the GCPD is incapable,” and Alfred’s always saying, “Bruce, you’re not ready, it’s too dangerous, you can’t do this by yourself, you’re too young.” And so they’re constantly butting heads, they’re not agreeing on things. That tension eventually is going to explode, and it [drives Alfred] away at the beginning of Season 2, but then once they get past that, you’re going to see them really start to work together as a team. And it’s going to be amazing. That’s Alfred. With James Gordon, Bruce is going to loosen up a little bit. Ever since mid-Season 1, he’s had a tension with [Grodon] for slacking off on finding his parents’ killer. Bruce will realize that Gordon did his best. Yes, he didn’t fulfill his promise, but he’s still a good ally to have. So Bruce will loosen up a little.

AX: Does Bruce view Gordon as a friend at all, or more as a work ally?

MAZOUZ: I think both. Gordon means something to him. If something happened to Gordon, Bruce would be sad, Bruce would be devastated. Bruce cares about Gordon. But at the same time, he does need him for the missions that he wants to accomplish himself.

AX: And how does Bruce view Selina Kyle, the future Catwoman, played by Camren Bicondova?

MAZOUZ: Selina kind of took a dark turn at the end of Season 1, and so …

MAZOUZ: Yeah. But Bruce doesn’t really know too much about what she’s been up to, so when he meets her again at the beginning of Season 2, their relationship is pretty much the same. But something happens.

AX: We know Bruce gets a love interest who is not Selina …

MAZOUZ: He does, Silver St. Cloud [played by Natalie Alyn Lind], who is in the comics. She is a socialite, she is the only one of Batman’s girlfriends who is able to figure out Batman’s secret identity without him telling her. And so that tells you already that’s she’s very intelligent. And she’s high society, and that’s pretty much how they meet, and there are immediate sparks.

AX: Can you say if Bruce gets to interact with the villains more in this season?

MAZOUZ: Of course. In Season 2, “The Rise of the Villains,” that’s what we’re calling it, the threat of the villains is going to be a lot greater. And so because of that, the rise of the heroes is needed to equal it out. So the heroes are going to need to unite and team up in order to take care of the villain problem. Eventually, they’re going to fail, because that’s where the need for Batman comes in. But Bruce is definitely going to get out there more, because he’s going to be involved with Gordon a lot more in that. He will start to get out there more. But his main purpose in Season 2 is to take down Wayne Enterprises – the corrupt side of Wayne Enterprises.

AX: It’s too early to ask about Season 2, but do you have a favorite episode or scene from Season 1?

MAZOUZ: I think my favorite scene from Season 1 is going over to Tommy Elliot’s [Cole Vallis] house and punching him with my dad’s watch.

MAZOUZ: We shoot ten months out of the year, and so I don’t have that much time to do anything else. So no, but maybe that will change.

AX: And what would you most like people to know about Season 2 of GOTHAM?