The actor talks playing Liz Taylor, plus THE NORMAL HEART, Poe and more 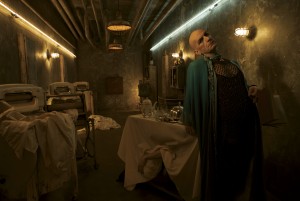 Actor Denis O’Hare is on his fourth role in the fifth season of FX’s AMERICAN HORROR STORY, Wednesdays at 10 PM. In Season 1, MURDER HOUSE, he was nominated for an Emmy Award for his portrayal of killer Larry Harvey, in love with Jessica Lange’s faded starlet character. O’Hare wasn’t in Season 2, but in Season 3, COVEN, he was mute servant Spalding, in love with Lange’s grand dame witch. In Season 4, FREAK SHOW, O’Hare’s con artist character Stanley teams up with Lange’s traveling carnival impresario; his performance earned him another Emmy nomination.

Season 5 of the series created by Ryan Murphy & Brad Falchuk, subtitled HOTEL, breaks O’Hare’s pattern a bit. Lange took a year off from the anthology series to do a stage play, so O’Hare’s character Liz Taylor, nee Nick Pryor, is going to have to love someone else this year. Still, the actor says, “I think I have love in this season. I don’t know how fulfilled I am, but I definitely think I have love.”

O’Hare has appeared in many films, including MILK and DALLAS BUYERS CLUB and won a Tony Award for his performance in 2003’s Broadway production of TAKE ME OUT. Genre TV audiences also know him for his work as king vampire Russell Edgington on TRUE BLOOD.

ASSIGNMENT X: What can you say about your AMERICAN HORROR STORY character, Liz Taylor, in Season 5?

DENIS O’HARE: I can give you a visual.

AX: Have you ever dealt with this level of makeup and costuming and wigs before?

O’HARE: Who says I wear a wig?

AX: Ah. So you’re not showing that you’ve shaved your head to accommodate a wig?

AX: Okay, how is working with the makeup and costuming?

O’HARE: You know what? It’s not even the makeup, it’s the heels. I wear I think they’re about six- or seven-inch heels, and they are crazy. I’m the tallest person on the set, except for [Cheyenne Jackson]. And it’s actually amazing, because I get to walk in and intimidate everybody by being so tall. It’s a great feeling. And I also wear very skin-tight clothes, I have to deal with where things go.

When Ryan first told me by email [about the character Liz Taylor], I have to admit, my response was, “Oh, my God. I’m scared to death of this, but let’s do it.” Because as a gay man, I’ve spent my entire life sort of running away from a certain level of femininity, because you have to make a decision early on what you’re going to be in the world. I’m not a particularly feminine person, so I have my own form of homophobia. So to be confronted with that by playing someone who is feminine is a real challenge. And I often talk to my four-and-a-half-year-old on Face Time in makeup. And he says to me, “Dada, you look beautiful.”

AX: Apart from physical appearance and finding love, what else can you say about Liz?

AX: Where are you shooting this season?

AX: Do you miss New Orleans, where Seasons 3 and 4 were shot?

O’HARE: No. Crazy governor [Bobby Jindal at the time this interview was conducted]. I don’t want to go anywhere near that state.

AX: AMERICAN CRIME seems to be doing it now as well, but for awhile, AMERICAN HORROR STORY was the only ensemble drama show on TV, bringing actors back each season to play new characters in new stories. How do you feel about this sort of unique work situation?

O’HARE: I love it. I think it is just the best of all worlds. As actors, all of us can do many things, but oftentimes, you’re only called upon to do one kind of thing. So let’s say you get into a series like CSI, where you’re a really good actor, but you’re only going to be called upon to do a certain range of things, and after four or five or six seasons, that’s kind of – I don’t know – stifling. So to be able to every year approach something fresh and to reinvent and, by the way, to risk failure, because not every season or character may be a good match for you, is pretty exciting.

AX: Besides working with Ryan Murphy on four of the five seasons of AMERICAN HORROR STORY, you also were in his HBO adaptation of Larry Kramer’s THE NORMAL HEART, playing a closeted NYC official. Had you ever done that play on stage?

AX: How was it returning to that material after two-and-a-half decades?

O’HARE: Oddly enough, I thought it was really interesting, because there’s a generation out there who is not educated about their gay history and about the history of AIDS, and I thought it was really amazing to tell that story to people who need it. In a way, this is more relevant than ever, and I thought it wouldn’t be. I was surprised at how relevant it was. [It’s about a man who is kind of unlikable, but has the moral upper hand. What do you do when the messenger is not likable? I thought Mark Ruffalo went a great distance to make [the character of Ned Weeks] likable, but the character as written is not an easy character to like, and that’s why the Felix character, the Matt Bomer character, is in the script in many ways. Yeah, it’s interesting that one man railing against society, one man standing against the stream, like a prophet. He’s a prophet figure.

AX: Are you involved the other two series Ryan Murphy has going right now, AMERICAN CRIME STORY and/or SCREAM QUEENS?

O’HARE: No. Very few of us are doing that. Sarah Paulson is in both [AMERICAN HORROR STORY and AMERICAN CRIME STORY], but most of us do not do both. Ryan is directing [on all three], but no. It would be too hard. I’m also a writer, I’m working on a new play with my writing partner, Lisa Peterson, a writer and director. We wrote a play called AN ILIAD, which is the one-man version of the Trojan War, and then we wrote a Bible play that was done in Chicago, and now we’re writing about the fall of Rome.

AX: Will you be in that?

O’HARE: No, that play is for a woman. It’s a one-woman show.

AX: Do you know when that will be produced?

O’HARE: We just started writing it. Probably a few years.

AX: Well, it takes a whale eighteen months to have a baby, so why not?

O’HARE: And plays are bigger than whales.

O’HARE: I did a movie of Edgar Allan Poe [for AMERICAN MASTERS on PBS].

[O’Hare shows picture of himself costumed and made up as Poe, a very close likeness.]

AX: How much makeup is that?

O’HARE: Not a whole lot. My moustache and a wig.

AX: Do you have a favorite season of AMERICAN HORROR STORY so far?

O’HARE: I don’t really. I’m very partial to Spalding as a character, I loved him, I kind of loved [Season] 3, but also I loved MURDER HOUSE, I loved Larry, so it’s hard to say.

AX: And what would you most like people to know about this season?

O’HARE: That you never know what’s going to happen on AMERICAN HORROR STORY. Anything goes. It’s scary. Tune in.

This interview was conducted at Fox Networks/FX Networks’ party for the Television Critics Association.