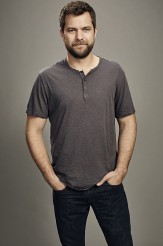 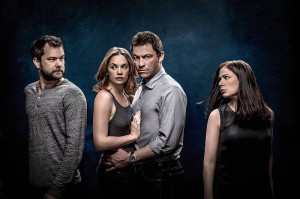 Joshua Jackson as Cole, Ruth Wilson as Alison, Dominic West as Noah and Maura Tierney as Helen in THE AFFAIR - Season 2 | ©2015 Showtime/Steven Lippman

Joshua Jackson is one of the stars of Showtime’s THE AFFAIR. Now in its second season, Sundays at 10 PM, THE AFFAIR began by showing us events from two differing points of view, married-with-four-kids writer/professor Noah Solloway (Dominic West) and married-and-grieving-the-loss-of-her-child waitress Alison Bailey Lockhart (Ruth Wilson). In Season 2, the series, created by Sarah Treem and Hagai Levi, expands to include two more perspectives, that of Noah’s wife Helen (Maura Tierney) and Alison’s husband Cole, played by Jackson.

Jackson has been a series regular before, on DAWSON’S CREEK and FRINGE, but he readily acknowledges that Cole provides some new challenges for him.

ASSIGNMENT X: What’s going on with Cole in Season 2?

JOSHUA JACKSON: Well, when we find him in the second episode, he is in the aftermath, the fallout of that horrible breakdown at the end of Season 1, so he’s not in a good place. He’s probably the least functional of all of the four main characters, actually. I think he’s the most undone by what happened. And we just follow him through that space. It’s a semi-inert half an episode for him, because he’s just so crushed by the end of what happened last year.

AX: Can you differentiate Cole’s from your previous screen breakdowns?

JACKSON: Well, I think the difference for Cole, and maybe it’s just the virtue of me getting older, I’m very sympathetic to the idea of a man building a life with somebody in a family and sort of wrapping his entire self-image around that, and then what the repercussions were, if all of that were taken away from you in very short order. So I think the difference for this one is a sort of basic emotional honesty to the journey that the writers are sending Cole on that I hope will be recognizable to people who’ve been through situations like that.

AX: Can you talk about what Cole is like once he starts to pull himself together?

JACKSON: Well, we have these four stories now, so Cole’s version of the story is slowly coming back to life, I guess. After the nuclear winter of having everything wiped out at the end of Season 1, he then has to slowly just build himself back, just figure out who he’s going to be now after a breakup in that world. Cole and Alison have been together for sixteen years, so your entire adult lifetime, adult life, has been shared with this person, and suddenly they’re gone, and it just so happens at the same time, your family homestead is gone, and your relationship with your family has been completely exploded, and so now starting from essentially a clean slate, he has to figure out who he wants to be, what kind of man he wants to be now.

AX: This season, because we are now seeing Cole’s point of view part of the time, do you play that any differently than when it’s a different character’s view of him?

JACKSON: Yeah. Part of the interesting challenge for myself and for Maura in the first season was to tell a character from somebody else’s perspective, so, a character that doesn’t have a fully-realized interior life, their own set of motivations, their own set of fears and foibles and strengths and all of those things, because you’re telling somebody else’s recollections, so they’re projecting onto you. You’re a memory. I feel this happens a lot of times – particularly [with] people who other people [see as], “Oh, you’re strong,” people just see the strength and they go, “Oh, you don’t have fears,” or “You don’t have those doubts, or that weakness,” and now you see Cole from the inside, and he’s actually riddled with fear and insecurity and a sense of a lack of purpose or worth or attachment, so yeah, I think you have a radically different version of the character.

JACKSON: A favorite scene of Cole’s, or a favorite scene in general? They’re not necessarily the same. I mean, I think I did some good work last year. I think there are a couple scenes between Ruth and I that I think are really beautiful and painful in the way that the affair is, and there are a couple more – the scene where she sort of invites Noah back into their family life I thought was so tremendous in its honesty and its heartbreak, that this woman in that situation would accept something so unacceptable in order to maintain her family. The show puts those characters in those types of situations and generally speaking writes, I think, very visceral, honest scenes.

AX: In Season 1, for a long time, we know that someone has died, but we don’t know who it is. At least at the beginning of Season 1, did you think Cole might be the person that something had happened to, or did they tell you straight off, “You live through the season”?

JACKSON: I knew it wasn’t going to be Cole.

AX: Do you know how long the plan is for THE AFFAIR to go, how many season?

AX: What would you most like people to know about Season 2 of THE AFFAIR?

JACKSON: That it stays real to itself, but expands upon the idea of Season 1.

This interview was conducted at CBS/Showtime/The CW’s party for the Television Critics Association summer press tour at the Pacific Design Center in West Hollywood.