Interview: Joshua Jackson talks THE AFFAIR and the end of FRINGE 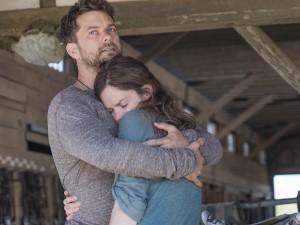 In Showtime’s THE AFFAIR, Sundays at 10 PM, we see two different versions of events as police interview two people about an as-yet unknown incident that has its beginnings in an extramarital affair. Creator Sarah Treem’s story introduces us to writer/teacher Noah Solloway (Dominic West), married to the wonderful and wealthy Helen (Maura Tierney) with four children, when he meets waitress Alison Lockhart (Ruth Wilson). Alison is married to rancher Cole, played by Joshua Jackson.

Jackson is no stranger to being a regular on television – he spent five years on FRINGE as Peter Bishop, who wound up traveling through several versions of the universe, and played Pacey Witter in six seasons of DAWSON’S CREEK. Major film projects for the Vancouver, B.C.-born actor have included THE MIGHTY DUCKS, CRUEL INTENTIONS and THE SKULLS.

At Showtime’s portion of the Television Critics Association press tour at the Beverly Hilton Hotel, Jackson participates in a Q&A panel for THE AFFAIR, then talks to three reporters in a follow-up discussion.

ASSIGNMENT X: After five years on FRINGE, were you looking specifically to do something that wasn’t genre?

JOSHUA JACKSON: You know, in general, I try not to choose one in opposition to whatever the last one was. But certainly, of the good scripts that I read, which were not very many, it seemed that every single one that I responded to was built on a much more human scale.

JACKSON: [In something like FRINGE, characters are moving the] plot forwards, and it’s built at the epic scale. So you’re trying to find, desperately hold onto the human center of the characters inside of this massive thing. But you’re really in service of this massive thing. Here, it’s the opposite, which is the fun part of an actor’s job. The plotting is really less important than the intimacy and the reality of these characters and their relationships between and betwixt each other. So that to me – that’s where I enjoy myself as a performer.

AX: You’ve been doing television for a good while at this point. Is there something about the storytelling atmosphere on television now that makes it right, in your opinion, for a show like THE AFFAIR

JACKSON: Well, for something like THE AFFAIR, I think that we’re at this amazing moment in television where, because of the multitude of platforms and producers and, frankly, the fact that in the film world in North America, they don’t make movies sub-one-hundred-and-twenty-million dollars any more, that all of those voices and that talent are now moving into television. And the level of production quality, even, on television has skyrocketed in the last ten years. So you have the space for small, intimate shows like this, where you actually are allowed to take the time to live with these characters, to become intimate with them in ways that are, frankly, uncomfortable sometimes. And then on the other end of the spectrum, you have space for GAME OF THRONES, where you have spectacle on a massive scale that would have been inconceivable even five years ago. So yeah, we’re in – everybody says it, but we are in this golden age, because I think this is the place where we’re telling the most interesting stories.

JACKSON: You end up getting more by having less, frankly, but not having to fill in all [twenty-two episodes]. No fillers. Not that I’ve ever worked on a show that had filler episodes, but I’ve heard other people did. [laughs] Whoops.

AX: The FRINGE musical episode wasn’t really filler, was it?

JACKSON: I mean, it depends on who you ask. We did that one-off episode every year. But yeah, I mean, a musical on a sci-fi show …

AX: Ruth Wilson plays your wife in THE AFFAIR. Were you familiar with Ruth Wilson’s work from before, from LUTHER and THE LONE RANGER?

AX: Especially based on her work playing a cheerfully homicidal genius in LUTHER, were you afraid she would stab you?

JACKSON: [laughs] She is pretty feisty, but I live with a German [actress Diane Kruger], so nothing scares me any more.

AX: Did you and your partner have a discussion about you working on a project called THE AFFAIR?

JACKSON: You know, honestly, after I read the script, I was just like, “This is really, really good and I would actually like to do this.” So I had her read it. She read it and she was like, “Yeah, it is really, really good.” It was only later that it dawned on us that, “Wow, this is going to be an interesting topic of conversation for years to come” [laughs].

AX: Your character in THE AFFAIR is a fairly angry man. Do you ever have trouble turning that off when they call “Cut”?

JACKSON: I mean, maybe in my younger years, but this is a good group obviously, you can see how we enjoy each other – Season 1 [laughs] – but I don’t take it with me that much.

AX: Do you have any superstitions about parts you play, like not wanting to play someone who’s killed in a plane crash?

JACKSON: I don’t know. Maybe if you were playing Superman, you don’t want to hold that curse, but generally speaking, no.

AX: Given that the framing device in THE AFFAIR is police interviewing two of the characters separately, will we find out what’s going on in that mystery by the end of the first season?

JACKSON: The show is about the lives of the characters, not a mystery. If I may be so bold, the question behind the question is, “Are you going to get left with your pants down like after watching [the first] season of THE KILLING?” It’s not setting up like that, because the journey is traveling with these two people and four people and six people and the families outside in the moments that they’re going along, not towards some sequel at the end.

AX: To ask a FRINGE question, were you happy with the way FRINGE wrapped up?

JACKSON: Yes, I was very happy. I was actually extremely proud of the way [show runner] Joel [Wyman] wrapped that up.

AX: Somebody asked you earlier about how you separate life from career …

JACKSON: Yeah, they were sort of talking about my career, and I was saying, “You know, the funny thing is, you’re asking me a career-based question, but I’ve been working for so long, that’s really a life-based question. You asked me, could I have played this five years ago? No, because it takes the seasoning of life to get you here.” When you’re an actor, those two things are sort of entwined.