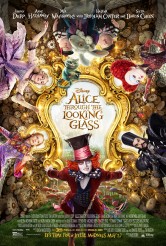 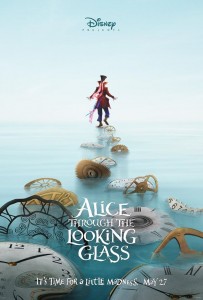 It’s not at all necessary to have seen 2010’s ALICE IN WONDERLAND to follow what’s happening in ALICE THROUGH THE LOOKING GLASS. It’s clear enough that Alice (Mia Wasikowska), now a young sea captain in the 1800s by virtue of having inherited her father’s ship, has had some pretty astounding adventures both in Wonderland and in this world. When she returns to Wonderland, via the Looking Glass (that is, a mirror), it’s also made obvious which characters are her friends, which are her foes and which are new to her.

Linda Woolverton wrote the screenplays for both films, based on the nineteenth-century books by Lewis Carroll, but James Bobin is the director this time out. He respects some of the stylistic flourishes of WONDERLAND director Tim Burton, but has a few less curlicues and a lot more steampunk clockwork. LOOKING GLASS, as it turns out, deals with time travel, as Alice tries to save her friend Hatter (Johnny Depp) from a life-threatening funk by rescuing his family from a long-ago calamity. Time (Sacha Baron Cohen) warns Alice that the past can’t be changed, but it turns out that learning from it can help the present.

That’s about the size of the plot, which when boiled down is a little like an episode of a playful TV procedural. Woolverton’s script does clear up a few questions, such as why that Tea Party went on for so long, though there’s at least one transition from Wonderland to England that’s puzzling, even in this context.

The fun here is largely in Dan Hennah’s fabulous (in all senses of the word) production design, which ranges from tiny robots that look like they’re right at home in Alice’s era to apocalyptic rust to villages and themed mansions that would be right at home welcoming visitors in Disneyland. Colleen Atwood’s costume design is also an essential contribution, with Alice’s versatile, colorful Chinese jacket changing hues in various lighting. Viewers who have been on the “Alice” ride at a Disney theme park may get a smile out of the nod to the black-light sections of that attraction.

Wasikowska is, as before, an appealing heroine, full of gumption and conviction. Depp is entirely fey and otherworldly as the Hatter, which conceptually works well enough, but his chosen accent for the role makes it hard to understand what he’s saying at times. Helena Bonham Carter puts the requisite haughty glee into the Red Queen and Cohen (an erstwhile collaborator with director Bobin on THE ALI G SHOW) delivers a portrayal of Time as vain and impatient, but not entirely unreasonable.

Carroll’s THROUGH THE LOOKING-GLASS and ALICE IN WONDERLAND have long been heralded for their hallucinogenic qualities. This LOOKING GLASS is a bit prosaic in its narrative, but it’s so exhilarating to look at that, in the end, it’s a fair balance.