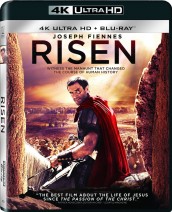 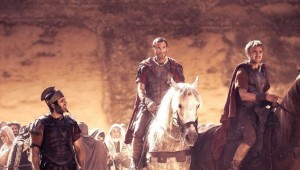 An interesting, albeit strange, story of a pair of Roman soldiers that set off on a mission to find the body of Jesus Christ after uprising begins in the country over reports that they holy figure rose from the dead.

RISEN stars Joseph Fiennes as Clavius, a non-believer tasked with solving the mystery of what happened to Jesus after he died in order to prove that he has not risen and is not the Messiah as numerous believers begin to develop that threaten everything in Rome.

First off you should realize this is not a religious film on one hand because it is told entirely from the perspective of the Roman soldiers. Secondly, it is more of an investigative drama as these soldiers seek to find answers to where the body of Christ went and who has seen him post-death. This is done through a series of interviews with numerous believers and non-believers that have either witnessed him or believe in a higher power guiding the way. There are also a lot of sifting through dead bodies in order to find him and with a country that is constantly at war internally or externally, it is a lot of bodies.

However, this being the tale of Romans trying to find the resurrected Messiah, it does turn very religious toward the end as Clavius finds what he is seeking in more ways than one. Unfortunately, this really distracts from what had come before it and we lose all of the mystery and investigation as it delves into pure religious

While the story is a bit long in the tooth, there are plenty of moments of nothing happening or people talking, the sets are pretty damn amazing using either classic structures or newly built sets that give real life to the film. That alone is very cool and worth the price of admission. Also the costume design and props are also very well done and Fiennes is fine as the lead, on one hand trying to do his duty and on the other not enjoying the fact he has been sent on a rabbit hunt.

Sony is offering up RISEN on video in a variety of formats including newly introduced 4K, ultra-high definition. So I’ve been singing the praises of Blu-ray for many years because it adds that much more to the viewing experience and for those still using DVDs, you are falling further behind because 4K is the next great thing in video. If you like Blu-ray, 4K tops it and really brings spark to a film. Here in RISEN, the sets, which are by far one of the major highlights, come off almost lifelike, the costumes look that much better and the film feels bigger. I highly recommend checking out 4K, not just for RISEN but for the many other titles that will be coming along.