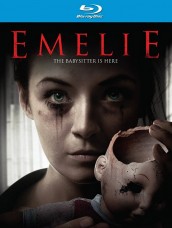 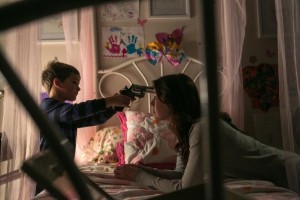 There is something definitely wrong with Anna. As a baby sitter goes, she leaves a lot to be desired when it comes to the wellbeing of the children she’s watching.

It only gets worse from there. Anna, whose real name is Emelie and is actually a French Canadian that came to America after violence made her leave the country and assume a new identity, doesn’t take too kindly to other babysitters coming along and wondering what the heck is going on. Plus, she develops an unhealthy obsession with the youngest child, Christopher, and keeps calling him by a different name alluding to maybe the loss of her own child or brother in her troubled past.

The big brother, Jacob, realizes pretty quickly Anna/Emelie has a screw loose and begins to question her motives and figures he’s the only one that can protect his younger siblings. So he uses all his tools only a tween can do to stop her with fireworks, traps and more

At the heart of EMELIE is the notion of putting our trust in others, particularly our children, when we have functions to attend or just want a break from family life. Can you really ultimately trust your children to a virtual stranger or even someone that you know a little about? Do you think this person has the best interests in mind for our children? What are they hiding in their past that may influence their emotions or reactions?

If you already had trust issues with those you put around your children, EMELIE will just reinforce those issues … in spades.