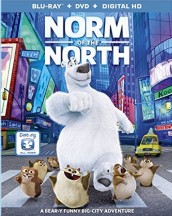 Blu-ray Review: NORM OF THE NORTH 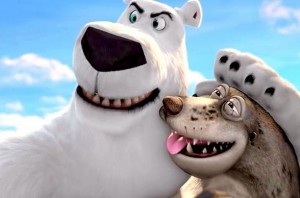 A scene from NORM OF THE NORTH | © 2016 Lionsgate Home Entertainment

Outside of Disney, animated films are either hit or miss when it comes delivering something you as a parent can feel good about letting your children watch. While NORM OF THE NORTH isn’t necessarily a bad movie for kids. The number of pee and fart jokes that are contained within leave a lot to be desired when it comes to letting kids watch what you hope will be a decent animated flick.

The story centers on Norm, a polar bear, who learns that humans are moving into his home in the vastness of the Arctic. He doesn’t really think this is a good idea so he does the sensible thing and goes to New York City in order to stop them. Of course, not everything goes according to plan. It is your typical story of a character trying to find their way in a world that is very different from what they are used to.

Luckily, Norm brings with him three small lemmings that are his friends and end up saving the movie by being adorable and hilarious at the same time. The main characters are decent enough but the movie doesn’t do a good enough job of establishing any lessons that were learned other than it isn’t a good idea to build high-priced condos on beautiful land (which anti-environmentalists might take as some sort of bash against them).

One thing that is definitely clear is that Disney is the tops when it comes to animation as a whole. NORM THE NORTH is not very well animated. In fact, it might be some of the shadiest animation that has come to a movie in some time. Also the casting of Rob Schneider as the lead voice talent may not have been the smartest move as he doesn’t necessarily have the chops to do it.

So if fart jokes are your thing, you enjoy watching animals dance when they shouldn’t have any business dancing, want to feel bad about what you are doing to the environment and don’t mind some ragtag animation, this one might be worth checking out. Or maybe you should just put INSIDE OUT on again.