The creator talks about her Hulu drama 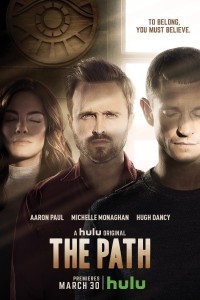 THE PATH is now streaming all of its ten-episode first season on Hulu, where it premiered and has been renewed for a second year. Created by Jessica Goldberg, THE PATH concerns a religion, Meyerism, born in the twentieth century. Eddie Lane (Aaron Paul) has his doubts, but his wife Sarah (Michelle Monaghan) is a staunch adherent, who also has a past with Meyerism’s current leader, Cal Roberts (Hugh Dancy).

Goldberg, who was previously a writer/producer on PARENTHOOD, CAMP and DECEPTION, makes herself available for questions during an event held in Malibu by NBC/Universal for many of its networks.

AX: How did you come to do a show on this particular topic?

JESSICA GOLDBERG: I had my own personal – I call it a crisis of faith. It was more of an existential crisis. I had a very hard year when I lost my dad and got divorced in one year, and just started doing my own personal searching and feeling very at sea in the world, and that’s sort of where the idea came from.

AX: Meyerism is a religion that you actually created for THE PATH. When you were inventing the religion of Meyerism, were you thinking, “Now, if I were inventing a religion, what elements would I like to put in there?” And how much of the show is balanced between actual faith and the politics of the people running the group?

GOLDBERG: When I sat down – especially when the writers came on board – to create Meyerism, we definitely started with what would be beautiful, like what could these people be striving for, what are the basic tenets of the religion that we would be drawn to ourselves? And then it became about the political machinations of the people. But the show to me is ultimately about marriage, and family, and those kinds of things.

AX: Did you have to figure out how long the religion had been around, and how much does that play a part?

GOLDBERG: Yes. Well, it was started in the Seventies. Once you get through the show, I think it’s revealed, but there was a Dr. Meyer who started it in 1973. We decided we wanted it to come out of the Sixties and Seventies, out of that time of seeking.

AX: Because some religions get very paranoid about the media and flip out before they’ve seen a frame, have any religions come up to you and gone, “Aggh, what are you doing?”

GOLDBERG: The only thing that happened – I think I’m allowed to say this – the show was originally titled THE WAY, and I guess there was another religious organization called The Way, who would not let us have that title. But I feel like that was very serendipitous, because THE PATH is actually a better title.

GOLDBERG: I hope the fun tension of the first season is, you have Cal, who is taking over, and his own personal demons and ambitions are in conflict to what the religion’s about.

AX: Is Meyerism a faith that would work if you were apart from the organization?

GOLDBERG: Yes. There are some characters in the show that just go to class. You could get their books and you could read them, and just take it into your daily life, some of their ideas, and use them for your own self-help. Sort of like people use yoga.

AX: Do any of the characters think, “Well, I believe this, and if the leaders flake out, I can still take what I believe and go away,” or are they very disillusioned when the leaders are disappointing?

GOLDBERG: I think some of those stories will be in the show.

AX: How did you get the cast that you have?

GOLDBERG: I begged, I groveled. No. Luckily, we sent it to Michelle first, and she responded. I think for women, actresses, sometimes it can be difficult to find really challenging parts. Also, she wanted to play someone dark. She didn’t want to be just a wife and mother, she wanted to explore more subterranean things, so the part spoke to her. And then we lucked out with Aaron. I mean, I didn’t know this when we asked him, but I guess he came from a very religious family, and so I think he was drawn to the material for that reason. And then Hugh – it was so weird. We couldn’t figure out who to cast. We were like, “Who could be this guy?” Because he has to be complicated, he has to be handsome, he has to be charming, but he can’t be smarmy. And then HANNIBAL [which starred Dancy] got canceled, and we all sort of jumped for joy. I’m sure he didn’t, but we were psyched.

AX: Do you find there are differences between working on network TV and a streaming service like Hulu?

GOLDBERG: Well, I was very lucky in my network TV experience, because I worked on PARENTHOOD, which was a show in which I do feel like you got to do un-network stories, you got to really explore human beings and their relationships and tell moving stories – I don’t want to say that other network shows don’t have that, but I was on a very special network show. But it does feel like obviously that you can be much darker, and you can explore much darker terrain, you can say bad words, people can have sex.

AX: Is there one aspect from various religions that was a common denominator you found you were able to pull into THE PATH?

GOLDBERG: Well, I definitely think in the end, it’s about death, what happens when we die. That seems to be the thing that is the most compelling about religion and there is the virgin and Heaven and Hell, and that seems to be the most basic, primal reason that people are drawn to faith.

AX: What would you most like people to know about THE PATH?

GOLDBERG: I’m actually just so curious how THE PATH resonates in people’s lives. It’s very nice to hear people starting to talk about experiences with their own faith and experiences with people they know, and I hope that it starts a conversation.

TV Review and Recap: DANCING WITH THE STARS - Season 13 - Week 6 - “Br...
CD Review: THE PERKS OF BEING A WALLFLOWER soundtrack
WILD CARD Highlights this week in Blu-ray, DVD and VOD Releases
THE AFFAIR: Executive Producers Sarah Treem and Jeffrey Reiner on Seas...