Home » Bones The Last Show at a Second Chance review 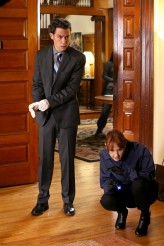 Lots of characters working to change behavior in a decent episode 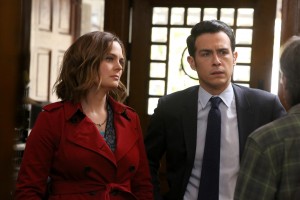 Emily Deschanel, John Boyd in the “The Last Shot at a Second Chance” episode of BONES | © 2016 Patrick McElhenney/FOX

The BONES Season 11 episode “The Last Shot at a Second Chance” does a good job of thematically linking its four subplots.

In the investigation storyline, the team looks into the murder of an ex-convict trying to get her life back together while living at a halfway house.  The situation is complicated when the prime suspect turns out to be Kenny Johnson (Daniel Lee Robertson). Kenny is not only the victim’s ex and father of her teenage daughter, but he also saved Booth’s (David Boreanaz) life when both were in prison. Booth doesn’t want to suspect Kenny, leading Aubrey (John Boyd) to accuse his FBI partner of deliberately looking the other way. Good news for Booth and Kenny – the killer turns out to be the halfway house administrator (Taylor Nichols), who was taking advantage of the essentially helpless residents.

There are three other sorts of second chances being dealt with by the regular/recurring characters. Aubrey and lab intern Jessica Warren (Laura Spencer) are both confounded by their inability to work out a first kiss. They get there when Aubrey pulls Jessica out of the way of a runaway car and they fall down together. It’s fluffy but agreeable.

Meanwhile, Brennan (Emily Deschanel) is dealing with the fallout from two episodes back, when she punched an obnoxious sexist man who was insulting her. Brennan maintains that she’s not sorry, which is truthful, but not what the FBI board of inquiry wants to hear. Booth urges her to apologize, as Brennan could be suspended or even fired for hitting a suspect. Brennan finally issues her version of an apology. The board decrees that Brennan will be put on probation under Booth’s supervision. If she messes up, he will also be liable. Booth finds this acceptable; Brennan protests. It’s nice to see continuity from episode to episode, and Brennan shouldn’t get away with decking someone she’s not trying to restrain, no matter how vile the man’s words. On the other hand, there’s something very squicky right now in seeing violence under color of authority treated relatively casually, even in the generally light context of BONES.

Finally, Hodgins (TJ Thyne) and Angela (Michaela Conlin) reach a turning point. Angela is having sexual dreams about her photography mentor (Gil Darnell), who’s also Cam’s (Tamara Taylor) ex, while Hodgins is sinking further into misery and misanthropy as he fails to cope with being paraplegic. Hodgins tries to sign over all of his belongings to Angela, at the very least suggesting divorce and possibly as a prelude to suicide. Angela refuses to accept Hodgins’ resolution or his gift. He finds her at home crying, and at last takes her hand. There are some good scenes in here, with strong acting from Thyne and Conlin. Even though every person has the right to decide on his or her own path, we can’t help but sympathize with Angela’s anguish and fury. It does seem that Hodgins is doing the right thing by Angela (and their son) by at last trying to cope, rather than give up entirely.

The sections of “The Last Shot at a Second Chance” flow together well, with Booth’s conflicted feelings about Kenny playing out persuasively. The discussion of convict rehabilitation is well-reasoned, and the overall drama is handled smoothly by all concerned.