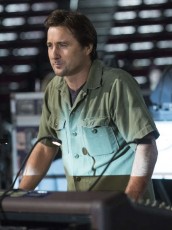 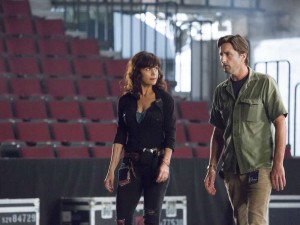 In Showtime Network’s new Sunday-night series ROADIES, Luke Wilson plays Bill Hanson, tour manager for the long-lived rock band Seaton House. We don’t see that much of the band, as ROADIES, created by Cameron Crowe (ALMOST FAMOUS) focuses on the behind-the-scenes crew who make sure the show goes on, night after night, town after town. Bill always has his hands full with imperious management, underlings of varying temperaments, overzealous fans, balky equipment – and his own feelings for married coworker Shelli Anderson (Carla Gugino).

Wilson previously costarred in two seasons of Showtime’s ENLIGHTENMENT, but his primary work has been in feature films, starting with 1996’s BOTTLE ROCKET, which began his collaboration with filmmaker Wes Anderson, and continuing through a multitude of others, including the LEGALLY BLONDE franchise, ANCHORMAN, IDIOCRACY, VACANCY and THE SKELETON TWINS.

AX: As an actor, how is it playing someone like Bill, who is fascinated by creativity but has no desire to be creative himself?

LUKE WILSON: I really thought that was a fun thing to play. It’s always interesting when you see those people, whether it’s the right-hand man of a painter like Andrew Shea or a guitar tech – even a guitar tech would be musical – but yeah, I like the idea of a guy that’s kind of just a soldier for the band, a totally loyal guy that is not creative. I mean, I would kid around with Cameron and say, “This guy, my character, is more like Bill Clinton, just in terms of glad-handing, but he’s almost a little bit more of a politician.”

AX: Do you talk to your assistants or people on the ROADES crew and ask, “Well, why are you doing this?” Was there anybody that you talked to?

WILSON: I never really talked to anybody specifically about that, I could just feel it. And what it distilled itself into for me was just loyalty. and also, what I was saying about reading rock ‘n’ roll books, you just get this sense of undying loyalty, to the point of literally fighting for the band.

AX: Did you do more general research?

WILSON: [Cameron Crowe] has got great stories, and I always enjoyed, since I was a kind, reading about bands and musicians, as well as directors and actors and things like that. Probably the thing I read the most about, whether it was Led Zeppelin’s tour manager, Richard Cole, or this legendary guy for the Grateful Dead named Rock Scully, and the different guys that worked with the Rolling Stones, they always seemed like these interesting characters that kept things moving, that the band also seemed to really always like the guy, get a kick out of him.

Through Cameron, I was able to talk to a few different [tour] managers, like the Eagles and Fleetwood Mac, and then just over the years knowing some different guys in bands, I talked to their tour managers. A lot of times, these guys in the bands would say, “Yeah, you seem like a tour manager.” And I never even knew if it was necessarily a good thing. They’d have an odd look on their faces. I feel like it’s one of the things I had read a lot about, so I had kind of a good idea of how I wanted to play it. The great thing about this show, I think, for all of us, is to be able to get definitive answers on any question you might have about the business or the workings of a crew and the family. [ROADIES] had a couple great technical consultants on it, and you could always ask them their take on it, and they would give you very definitive answers, like, “Oh, no. You would never say that.”

AX: A lot of your scenes are with Carla Gugino, where both of your characters are literally trying to make sure the show gets on the road. Do you see this as, in a way, you’re in a buddy comedy with Carla Gugino?

AX: It appears that your character Bill has a somewhat romantic interest in her character Shelli …

WILSON: Right. She’s married, and my character’s been left by the love of his life, and he’s left having these meaningless one-night stands. I almost feel bad for the guy now. If he were just a kid …