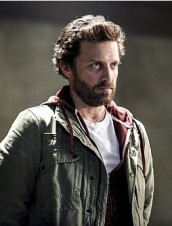 God and Lucifer talk on The CW 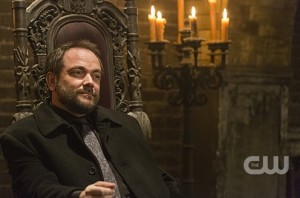 There are now and have been other shows where the Devil is an actual onscreen character, but SUPERNATURAL should get some sort of theological fantasy award for bringing him together with God to hash out their issues.

Yes, in the Season 11 penultimate episode “We Happy Few,” Lucifer, still in the body of Castiel (Misha Collins) finally sits down to talk with God, aka Chuck Shurley (Rob Benedict). It’s not an easy task for Sam (Jared Padalecki) and Dean (Jensen Ackles) to make this happen. The Winchesters try the therapeutic approach, encouraging each to listen to the other. At first, Lucifer sulks and Chuck won’t apologize for being an absentee father.

But finally, Chuck admits that he (God) felt guilty about having a favorite when, as the Creator, he wasn’t supposed to have favorites. He gave Lucifer the Mark of Cain because he thought Lucifer was strong enough to bear it, and banished Lucifer to Hell because he couldn’t deal with his guilt over the whole business. Lucifer accepts his dad’s apology.

Robert Berens’ script may not be George Bernard Shaw, but then, Shaw never put God onstage with his Devil. Collins and particularly Benedict are wonderful in the scenes, and the writing is acute, inventive and nervy.

There’s still the matter of dealing with Chuck’s (God’s) sister Amara (Emily Swallow), who wants to destroy the world, and her brother, in that order. Since it will take too much time to resurrect the dead archangels and rehabilitate the surviving Michael, this leaves our team with Heaven, Hell and witches.

King of Hell Crowley (Mark A. Sheppard) is on board, though his demons don’t support him – he’s all about his own ego and not about his minions. (Yes, this is relatively pointed.) The angels don’t trust Lucifer, even when he lets Castiel out to speak to them. Rowena (Ruth Connell), all set to travel back to the past to live out her life in ancient Greece, is reluctant, but her fellow witch Clea (Barbara Eve Harris) is ready to work with the Big Guy. Rowena comes around.

In her quest to find her brother, Amara kills the latest Prophet of the Lord (Keith Szarabajka) – poor guy, we barely knew you, and you were a fun character.

Chuck says that Amara will have to be locked up as before. If he kills her, it will unbalance Light and Dark, and Creation will be undone. Dean argues that Amara should be killed, but it turns out that this is because he’s feeling guilty that he couldn’t bring himself to kill Amara when he had the chance.

In order to trap Amara, somebody has got to take the Mark. It can’t go back to someone who’s had it before, so Sam has arranged to take it. Dean is of course horrified; Sam says that if it breaks him, Dean can just lock him up forever. Dean is still against it, but Sam points out that this is, quite literally and directly, God’s plan.

Rowena leads Amara to the Men of Letters headquarters. Amara has complaints that are not unlike Lucifer’s – her brother created the archangels so he’d have lesser beings, when Amara was happy with just the two of them. Chuck/God accepts this accusation, but also says that creativity, and the Creation that came from it, wasn’t something that came from him or his ego, it was just there.

This works for the story, and it also works for the concept of artistic inspiration (i.e., why the folks making this show are doing it, and how the characters and the audience all got here). It is presented so simply and gently that it’s easy to accept.

Amara is willing to die, but not to be locked up again. She blasts the witches chanting against her (scattered all over the world), hits Lucifer so hard that he’s knocked out of Castiel, and brings Chuck down for the count. However, she wants to destroy the world so he can see his Creation die before he does.

So “We Happy Few” brings in psychology, creativity, theology, emotion, end of the world jeopardy and does it in as matter-of-fact a manner as these things have ever been tackled. Bravo, guys.