Home » Bones TV Review Season 11 The Movie in the Making

A very enjoyable look at the characters 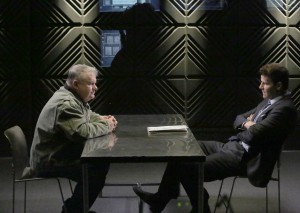 In the BONES Season 11 episode “The Movie in the Making,” a documentary TV program follows the Jeffersonian crew, plus FBI agents Booth (David Boreanaz) and Aubry (John Boyd), as they investigate a case.

The premise sounds like it could go bad quickly, but in practice, it’s pretty charming. The documentary camera gets to zoom in, visually commenting when the characters unknowingly contradict themselves. There’s a cheerful, relaxed atmosphere here, as though the regular cast are very much enjoying letting their characters speak out. Of course, the camera following the investigators with witnesses and suspects probably violates all kind of laws, but BONES seldom sweats the technicalities.

The mystery surrounds the body of a young man found in a landfill. Hodgins (TJ Thyne) determines that the corpse of 25-year-old Brandon Bloom has been there since 2006. Since the bones suggest childhood abuse, the prime suspect is Brandon’s gambling addict father. Booth is inclined to trust the older man when he says Brandon’s injuries were from skateboarding, while Brennan (Emily Deschanel) worries that Booth’s past as a gambling addict is clouding his judgment. However, incriminating green fabric fibers and bits of wood lead to Brandon’s old pal and business partner, who accidentally knocked Brandon into a saw when Brandon wanted out of their failing t-shirt company.

Cam’s (Tamara Taylor) efforts to rein in personal information backfires when her longtime on-and-off boyfriend, lab assistant Arastoo (Pej Vahdat), comes too strongly to her defense. Came winds up proposing, so that works out.

“The Movie in the Making” finds a way to hark back to plenty of old episodes and characters. Hodgins even brings up his much-missed friend Dr. Zack Addy, who we know is in a mental institution for falsely confessing to some baroque serial killer crimes. The late Vincent Nigel-Murray and Lance Sweets are also eulogized. It’s a shame nobody ever seems to mention original lab chief Dr. Daniel Goodman, played by Jonathan Adams, but we can’t have everything.

On the home front, Brennan is concerned when daughter Christine (Sunnie Pelant) first seems to be leaning toward Booth’s plans for her to be a pro hockey player. Then Christine flummoxes both her parents by announcing she wants to be a car salesperson. By the end of the episode, Brennan and Booth are both happy to support Christine in her career choice (particularly since she’s a little kid and probably will grow out of this).

“The Movie in the Making” is a sweet reminder of BONES’ history and a fun look at where all our current characters are now. It puts the show in the best light possible.