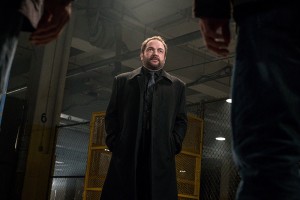 The SUPERNATURAL Season 11 episode “Hell’s Angel” deals mainly with Lucifer in the body of Castiel (Misha Collins). Mark Pellegrino makes a welcome if slightly illogical appearance as the previous version of Lucifer.

Crowley (Mark A. Sheppard) gets his hands on a sacred shofar, a Hebrew relic that belonged to God. (People familiar with shofars will be surprised at the look of this one.) Crowley offers it to Dean (Jensen Ackles) and Sam (Jared Padalecki) as a means to conquer the Darkness, aka God’s sister Amara (Emily Swallow).

The problem is that, although everybody agrees that the shofar may be a great weapon, they’ve all got different ideas about what to do. Sam and Dean both think there’s probably something to Lucifer’s claim that if he was able to help God banish the Darkness once before, perhaps he can do it again. Dean wants to exorcise Lucifer from Castiel’s body, then force Lucifer to use the horn. Sam, reminding Dean that Castiel offered Lucifer the use of his vessel, wants to just let Lucifer use the horn without separating him from Cass. Crowley insists that he won’t turn over the horn unless and until the boys get Lucifer back in his cage in Hell.

This makes for a very funny scene that’s played as drama, though there’s a sense that the actors have a good idea of how it all sounds. Fans of KENTUCKY FRIED MOVIE may be reminded of the “These are lost, drunk men who don’t know where they are and don’t care …” routine.

Amara is being tended to by none other than Rowena (Ruth Connell), Crowley’s unloving mother who we last saw having her neck broken by Lucifer. Turns out that Rowena enchanted her own life force, or something. This bit of resurrection is so easy that it begs the question of why the show bothered to kill Rowena off at all. Can she ever be killed? Who knows, but she brings Amara around. The Darkness decides to show that she’s still got it.

Meanwhile, Lucifer is trying to round up support among the angels in Heaven – he’d like to be their new leader, called God. This lasts exactly as long as it takes Amara to send a tidal wave of Darkness through Heaven’s halls. Then Lucifer gets summoned by the Winchesters. This doesn’t go very well. The horn does summon Amara, who gets there in time to stop Lucifer from killing Dean. Amara takes Lucifer with her to an indeterminate location and begins torturing him, proving that the Prince of Lies was, well, lying about his ability to overpower the Darkness. After this spectacular failed attempt, Sam and Dean resolve to keep trying to rescue Castiel.

It’s all very emphatic and kind of goofy. People who like their SUPERNATURAL dead serious and full of angst may protest, but any genre show can hit those notes. When SUPERNATURAL immerses itself so much in its own mythology that even its characters start to notice that there’s something absurd in the doom, that’s when the show is most likely to hit notes of originality. This is the case with “Hell’s Angel,” which demonstrates that SUPERNATURAL continues to have the courage of its own insanity.