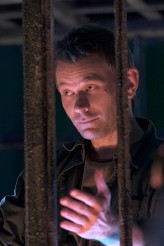 Existentialism on a grand scale 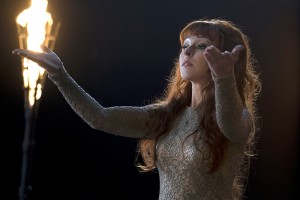 The Season 11 SUPERNATURAL episode “O Brother, Where Art Thou?” is a little like one of those inquiries where each response is met with another “Why?” The title refers specifically to Amara’s (Emily Swallow), aka Darkness, quest to find her brother – that is, God – but by the end, we’ve got plenty of questions of our own. Is Amara’s interpretation of Creation, which is that God set the whole business up as an act of divine ego, correct? Would Amara’s version of Creation really be bliss, as she tells Dean (Jensen Ackles)? In those conditions, what would bliss be?

In addition to these fairly heady questions, there are some more true-or-false ones. Is Amara consciously or metaphysically attracted to Dean because he, albeit unintentionally, freed her from her prison? Can we believe what Lucifer (Mark Pellegrino) tells Sam? Does Crowley (Mark A. Sheppard) have any idea of whose side he ought to be on?

Speaking of Pellegrino, it’s so great to him back as Lucifer that we can overlook the fact that, when the Fallen Angel went into the cage, he was actually in Sam’s body at the time. What’s harder to overlook, especially after the reminder in the “Fan Fiction” musical episode, is that the Archangel Michael in the body of Sam (Jared Padalecki) and Dean’s half-brother is supposed to be in the cage with Lucifer, and he’s nowhere to be seen or referenced. (O Continuity, where art thou?)

These issues all arise because Sam is so sure that God has been sending him visions telling him that Lucifer will be able to help with the Darkness problem that Dean caves – Sam can confer with Lucifer, provided Lucifer stays in the cage and Sam doesn’t have to go inside. This doesn’t fully jibe with Sam’s vision, which has him being in the cage and feeling calm as Lucifer touches his head. The brothers call on King of Hell Crowley, who, once he gets over his surprise at the nature of the problem (“God has relatives?”), agrees to help.

Although our last sight of Crowley’s witch mother Rowena (Ruth Connell) had her running free, she’s now Crowley’s prisoner again.  Rowena also grudgingly agrees to use her knowledge of the Book of the Damned to make it possible for Sam to talk to Lucifer.

Meanwhile, Amara is trying to literally find God by talking to preachers and priests, then consuming their souls (and those of their followers) when God responds to neither prayers nor atrocities. When Dean investigates one of Amara’s massacres at a church, he is drawn to her. Amara transports them both to what looks like the site of her arrival on Earth, and tells Dean that she wants a Creation with no rules, only eternal bliss. The souls she consumes are part of her, and thus will live forever. Dean tries to stab Amara with an angel blade – it shatters. Amara likewise cannot consume Dean’s soul, as they share a bond. She kisses him.

Then a group of angels try to arrest Amara, threatening her with a smiting by all the angels of Heaven. Amara of course blasts the angels, then sends Dean out of the smiting zone.

Back in Hell, Lucifer is tickled to see Sam. He offers his help if Sam will be his vessel. Sam refuses. Rowena’s magical wards fail and Sam is transported inside the cage. Sam is just fine with this, as he’s seen all this in his visions – until Lucifer explains that he, not God, sent Sam all the suggestions. Now Sam is trapped in the cage with Lucifer.

Since this isn’t Sam’s first rodeo in the Hell cage – and since SUPERNATURAL realistically needs both Padalecki and Ackles on deck – it’s more a matter of how than whether he’ll get out. A much bigger looming question is exactly what the show is going to do about God. It’s one thing when the regular characters can’t get a line on His whereabouts, but when his sister is doing the seeking, it seems like a response of some sort would be forthcoming. SUPERNATURAL is  painting a truly intriguing picture this year – let’s hope it doesn’t wind up in a creative corner.