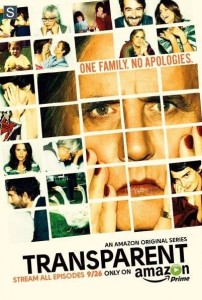 Soloway, whose previous credits include working on SIX FEET UNDER, UNITED STATES OF TARA and the documentary miniseries THIS IS ME, was inspired to create Tambor’s character, Maura (nee Mort) Pfefferman, by her own father. Like Tambor’s Maura, Soloway’s father came out relatively late in life as transgendered. TRANSPARENT explores both Maura’s journey into living as a woman and the effect on her adult children and ex-wife Shelly (Light).

Besides TRANSPARENT, Soloway was also so impressed with the comedy of Jessie Kahnweiler that Soloway’s Wifey.tv is bringing Kahnweiler’s autobiographical THE SKINNY to Refinery29.com as a series of six ten-minute episodes, premiering January 27.

ASSIGNMENT X: What are some of the things we can look forward to in Season 2 of TRANSPARENT?

JILL SOLOWAY: I think what Amy [Landecker, who plays Sarah Pfefferman] said is true, that a lot of people accuse the Pfefferman children of being a little bit selfish in Season 1, so they are going to start to face the consequences and start to face the results of some of their actions. I’m super-excited about this historical story where we’re tracing Maura’s legacy, we’re tracing where the family comes from, going all the way back to Europe in the Thirties. And I think when I first thought of the show, it was, each season, a different kid gets the house, so Season 2, it’s Josh’s [played by Jay Duplass] house.

AX: You also have flashbacks …

SOLOWAY: Well, we love doing the characters, and then we love having one strand that’s about the past. I don’t know if you remember Tante Gittel’s [played by Hari Nef] ring from Season 1, where Josh talks about this ring, and did we have family members, and where did we get this ring, so we trace the evolution of Tante Gittel’s ring.

AX: To ask a broad gender politics question, how do you deal with the issue of how being a woman is defined, and who gets to define that, and how that translates into life and dealing with others?

SOLOWAY: The first thing I tell people when they want to ask this question, which is about the thing that happened in the New York Times, where Elinor Burkett [wrote about] the Trans-Exclusionary Radical Feminist, where radical feminists are sort of creating a line between themselves and trans women, the first thing I do is to tell people to buy a book called THE WHIPPING GIRL by Julia Serano, which was a huge education for me about exactly where trans misogyny comes from, and that’s sort of the baseline education about what it means for a culture to be phobic about in particular trans women, more so than trans people. And then the details about, what is a woman – is it high heels, or is it having your period, or is it not having privilege, or all of these things? We’re sort of incorporating that as a story this season. We’re having Ali [played by Gaby Hoffman] and Sarah and Maura go to a women’s music festival, where the politics between radical feminists and trans women become part of the plot of Season 2, so we’re going to address all of that stuff.

AX: One of the other subjects that TRANSPARENT deals with is older women’s sexuality, whether the women are cis – that is, who identify with their birth gender – or trans …

SOLOWAY: Yes. And we’re doing even more of that this season, as they were talking about. There’s a scene between Maura and Shelley that I’m absolutely positive is unlike anything that’s ever been seen on television before. We have Cherry Jones this year as Ali’s professor and as a love interest, and really doing some sexy stuff with her. And there are so many ways in which the male gaze, which is business as usual, white cis males defining standards of beauty and defining what pleasure or desire looks like from their perspective, and we’re trying to bust all of that open by having innate, real, essential female desire portrayed through every character, at every age.

AX: Now, are you looking at that older woman’s sexuality through interviews of people you’ve talked to, or aspirational for where you’d like to go, or …?

SOLOWAY: All of it. I am fifty, but of course, I know lots of women between the ages of fifty and a hundred who all have incredibly vital and satisfying sex lives, and of course, those should be portrayed along with anybody’s. Again, it’s about removing the male gaze, so it’s about removing this question of, “Am I hot enough to turn a man on?” It’s like, put all that aside, create this sort of alternate universe where women are the subjects instead of the objects, and their sexuality is innate, and from their own place of desire about satisfying their own desire, instead of having to be an object in somebody else’s story.

AX: A number of the characters in TRANSPARENT are lesbian or bisexual women. Does that make it easier to, as you say, make women the subject rather than the object?

SOLOWAY: It helps. The removing of the male gaze from female sexuality is part of the story. Ali had sex with men Season 1, and sex with cis men, and I feel that we were still able to tell her story in a very feminist way. So for me, it’s as simple as simply switching the paradigm and saying, “Woman as subject; woman as subject, not object.” And that can mean any kind of sexuality – straight, queer, bi, lesbian, poly, all kinds of things that we are excited about exploring.

AX: Does Jeffrey Tambor ever come to you and just say, “You’ve blown my mind”?

AX: Does he bring anything to Maura that you hadn’t expected for Maura?

SOLOWAY: Maura is so fully-formed and so real and so human and so lovable, and every time I see her on the set, I run up to her and I get so excited. She’s not Jeffrey; she’s different and she’s her own full person.

AX: In the real world, Caitlyn Jenner is currently a very prominent example of a trans woman coming out at an older age. Do you see any similarities between her and Maura?

SOLOWAY: I sort of like that the [TRANSPARENT] world can exist in its own world, even though both families are from Los Angeles, and I don’t want to try to conflate the two, as much as they naturally get conflated, as much as it’s fun for me to think of myself as having a lot to do with Kim Kardashian [laughs]. The truth is that every trans person is different. There are millions of ways to be trans, and one of the things that Caitlyn and Maura both have is that they come from financial privilege and they have the ability to be in control of their transition, which is a real crisis for trans people, many of whom can’t get jobs, many of whom don’t have these legal protections. There’s a crisis of people being murdered, of suicides, a preponderance of having to do sex work to support themselves.

In many states, it would be legal for you to interview a trans person for a job and to say to their face, “I’m not hiring you because you’re trans.” So there’s a huge civil rights problem and a huge learning curve for the medical industry and for the government, for everybody to catch up that trans people are people and they deserve the same rights as all people. That’s probably what Maura and Caitlyn have in common, is they have access because of their [financial] class.

AX: Do the Emmys and the Golden Globes and other awards bring any kind of extra validation, or is that just like icing?

SOLOWAY: We’ll take it all. We love it. We love the validation – again, it’s a privilege to be able to talk about the civil rights movement, as opposed to, “Hey, we’re just here to make a great show and have a lot of attention.” So I’m always looking at that, when something like the Emmys or the Golden Globes happen. I go, “This many more people are going to see the show, and this many more people are going to understand that trans people are people.”

AX: Does that extra attention bring any extra pressure?

SOLOWAY: We really come from this really organic place. I wake up in the middle of the night from my dream and I see a scene, and the actors are all so funny, and we play a lot, and we entertain each other on the set, and it all happens very naturally. I honestly don’t have the feeling of, “I’d better come up with something good, and fast, because of all this pressure.” I just think the fact that we get these nominations, and that there is this kind of attention – to me, I just think this is very exciting, because it will bring more people to the show and ultimately bring more people to the movement, and it’s all good. I somehow don’t feel the pressure of it. I don’t know why.

AX: And what would you most like people to know about Season 2 of TRANSPARENT?

SOLOWAY: It’s a ride. It’s a wild ride. It’s powered by that same feeling of Season 1, where we want to give people these moments where they go, “I can’t believe that this is on television, I’ve never seen anything like this, never seen this before.”