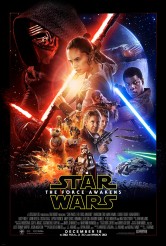 A different opinion on the return of a classic franchise

— Here there be spoilers — Read at your own risk!

There has probably never been a better use of movie magic than STAR WARS.

In its potent mixture of human archetypes as old as our deepest past, laser blasters and starships from as far in the future as we can gaze, in it’s perfect counterpoints of the familiar and strange, the exciting and deeply moving, this universe George Lucas created 40 years ago is the kind of thrill best experienced in a moving picture. In just its original three films, it contains more iconic moments than almost any other set of films.

Even the maligned prequels, at their most stumbling and frustrating, there is some undeniable spark in what Lucas made, pulling generation after generation into that galaxy far, far away. But more on that later.

Today I come to praise STAR WARS: THE FORCE AWAKENS, the newest entry in the Skywalker saga, and it feels almost as good to write this review as it felt awful to write on THE PHANTOM MENACE 16 years ago. Back then, my first for that film were “Writing every word of this will hurt.”

But what director JJ Abrams has done, along with vaunted STAR WARS writing partner Lawrence Kasden (THE EMPIRE STRIKES BACK, RETURN OF THE JEDI) is return this saga to the glimmering joys, the raw blasts of fun Lucas first provided with A NEW HOPE in 1977.

That’s what makes THE FORCE AWAKENS wonderful to watch, and what puts a cap on its potential.

Like the STAR WARS films, the essential plotline can be summed up simply : 30 years after RETURN OF THE JEDI, a new collection of unlikely allies find themselves pulled into the echoes of the Skywalker saga. Unlike previous STAR WARS films, whose simple storylines covered complex themes and deeper human dilemmas should the viewer care to look, there does not seem to be much interesting going on beneath the surface of THE FORCE AWAKENS.

In broad strokes, the story begins with a diminutive droid (ball of fun BB8) as custodian of a secret vital to the success The Resistance (once the Rebel Alliance) all the while being hunted by The First Order (once the Empire) under the direction of mask wearing, black clad, red-saber wielding Kylo Ren (Adam Driver).

Marooned on a desert planet, BB8 soon finds a protector in a teenage girl, Rey (Daisy Ridley), and her new friend Fin (John Boyega). In the midst of the thrills and escapes, it comes to light the First Order has a new, planet destroying mega-weapon pointed at the heart of peace and freedom in the galaxy. We soon find ourselves hanging out again with Han Solo, Chewbacca, Princess Leia and C-3P0. Is the structure starting to sound familiar?

Beyond this point, I’ll forgo the plot points and let you enjoy discovering them for yourself. Suffice to say, the galaxy has a weirdly small feeling even while our heroes, new and old, visit planets we’ve never seen before.

As an enjoyable film-going experience, it delivers. What else can reasonably be asked of a movie, after all? As a STAR WARS film, falls somewhere between the original films in the prequel trilogy, and evidences unsure portents of future STAR WARS films.

Having seen it twice, I find myself with the feeling that it will have an aftertaste similar to other Abrams projects: thrilling and enjoyable at first, but less impressive and impactful as my mind pulls with and pulls at specific moments and meanings. Where are most of the film has the familiar greased lightning momentum Lucas first perfected 40 years ago, there are a few moments which seem less mysterious than written-around. There’s a ‘don’t look behind the curtain’ feeling when old story beats aren’t’ being retread.

When asked a reasonable question by Rey, on on the mind of every STAR WARS fan, Lupita Nyong’o’s character literally says, “A good question for another time.” You can almost feel Abrams pointing behind the viewer sitting in the theater and shouting, “Hey, look over there!”

THE FORCE AWAKENS is the work of a world-class mimic.  It’s amazing and nostalgic to see Abrams put his toy through its Technicolor paces, but like all mimics, Abrams cannot take us anywhere the original creator hasn’t already tread. As a STAR WARS fan, it’s there we find what might be the film’s biggest shock. Probably not one intended by Abrams and his crew.

For the last 16 years, STAR WARS creator George Lucas has been getting kicked around by fans of his creation, lambasted as tone-deaf and somehow unaware of just what made people love his era-defining creation. He gets thrashed for wrecking STAR WARS, as though he had noting to do with its creation.

But as THE FORCE AWAKENS unspools, it becomes clear Lucas perhaps knew it better than even the most die-hard fans will concede.

A kind of controlled experiment has been going on since A NEW HOPE was released, and only now can we really see its full shape. When it came to the greatness of STAR WARS, what part was Lucas, and what vital parts were provided by others?

In the 1970s and 80s, with Episodes 4-6, Lucas was a growing filmmaker with a studio to please, serving as director/executive producer/story guru as he worked with others to flesh out and vitalize his pocket universe. What he created were three delightful, moving and amazing films, STAR WARS, THE EMPIRE STRIKES BACK and RETURN OF THE JEDI. They stand alone as unrivaled imaginative achievements, different and challenging each in their own way.

Each one highlights a different and unique cinematic thrill, both new and as old as Republic Pictures serials: In A NEW HOPE, the X-Wing attack on the Death Star; in EMPIRE the walker attack on the Hoth base, Han Solo frozen in carbonite and the wrenching the climactic lightsaber fight between father and son; in JEDI we have the swashbuckling fight on Jaba’s sail barge, the blinding fast speeder bike chase through the forests of Endor, and the space battle to end them all around the new Death Star.

Under the surface, Episodes 4-6 examined the way humans move through their lives, how they choose who they want to be and what those choices mean for the world around them. They were quick and brilliant amazements, almost perfect at every moment, playing at a pace every 10-year-old could enjoy and most adults could appreciate. They stood alone in the history of film.

But who did what to make them great? From the outside, it was hard to know.

By the 1990s and 2000s, with Episodes 1-3, Lucas was an industry legend, bankrolling his own films with only his creative impulses to placate. We got to see a STAR WARS without the influence of anyone but Lucas.

What he created were THE PHANTOM MENACE, ATTACK OF THE CLONES and REVENGE OF THE SITH, which highlighted Lucas’ genius for binding story structure with theme, but buried all his good work under his anti-talent for dialogue and directing actors. We learned Lucas needed someone to blunt his worst impulses.

The talent for melding the familiar and imaginative were on full display; MENACE’s BEN HUR-style pod race, the threeway light saber fight in the techno-catacombs of Naboo, the capital-of-the-galaxy nightscape of Coruscant; CLONES gave us the seascape army-factory of Kamino, the gladiator arena of Geonosis; SITH revealed to us the perfect setting for Anakin’s fall to anger, the epic saber fight on the lava planet of Mustafar, the heartbreaking sequence of Order 66, and the grim way tyranny is usually begun with the votes of free people. All new vistas, and all unique and different from Episodes 4-6.

At their core, the prequels were less occupied with human level questions than how corruption and systematic collapse tear apart what has endured for 1000-generations, and in the midst we watch a young boy, Anakin Skywalker, trampled under that galaxy-wide push and pull until he is manipulated into Darth Vader’s suit of evil.

In the prequels, the awful and the wonderful were smashed together so tightly they could not be separated, becoming a frustrating mix which still drives fans to distraction 10 years after their release. The poetry of human pain and regret rests side-by-side with Jar Jar’s pratfalls. “You were my brother Anakin. I loved you. You were supposed to bring balance to the force, not leave it in darkness,” rests side-by-side with “Yipee.”

Now, beginning with Episode 7, we see STAR WARS without Lucas’ hand at all. And we learn STAR WARS without Lucas is missing an eye for the new horizon. While Abrams never visits a familiar world, Jakku may as well be Tatooine. Starkiller base may as well be Hoth. The Resistance’s military base may as well be Yavin. Abrams’ new entry is it cycles back and reveals just what Lucas’ strengths as a producer and world builder were. As we found Lucas needed the influence of others to make STAR WARS, THE FORCE AWAKENS reveals STAR WARS just might need Lucas’s influence for the same reason.

Say what you will about Lucas, but he never had a fear of treading new territory, even while his audience might not want to follow. Abrams seems content to play with the pieces as given, reliving past story moments with new sheens, never really showing us the kind of strange and imagined vistas which are a key to what we love about this.

Overall, THE FORCE AWAKENS is enjoyable but somehow blunted, as though everything had been channeled through an enthusiastic focus group. There’s nothing here we haven’t seen before, which say what you will about the prequel’s, was not a fault they shared.

What does this mean for the future of STAR WARS? At this point we can’t say for sure. We’ll have to cast our eye to the horizon, watch the twin suns set, and wonder about the future like someone we all know.

Christopher Allan Smith was the news editor of the late, greats EonMagazine.com and Cinescape Magazine. Since then he has become an Emmy Award winning producer and director. His first novel, JETT JERGENS AND THE INFINITY KEY, is due out in 2016. He can be reached on Twitter at @JettJergens