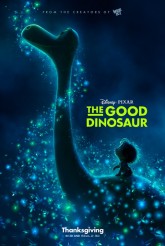 The execution doesn’t live up to the premise 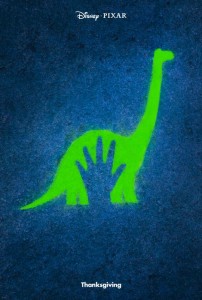 Pixar’s latest offering, THE GOOD DINOSAUR, gets off to a promising start, with a huge, fiery asteroid missing Earth 65 million years ago. Consequently, it’s dinosaurs that evolve into the dominant species, though mammals (including humans) do exist. Think of the possibilities!

And then forget them, because THE GOOD DINOSAUR doesn’t seem to want to have anything to do with imagining anything new or big, let alone combining the two. Instead, it mixes the boy and his wild pet genre with the Western genre. Flip it so that the young Apatosaurus hero, Arlo (voiced as a child by Jack McGraw and as a teen by Raymond Ochoa) is a human and the non-speaking human youngster Spot (voiced without speech by Jack Bright), who doggedly follows Arlo around, is a wolf cub or coyote pup, then make Arlo’s family homesteaders in the old West, and you could mistake this for a number of other movies. When Arlo gets lost and has to find the courage to make his way home, participating in a cattle drive, you could mistake it for even more other movies. There’s nothing here that springs out that makes unique use of the overall concept.

This wouldn’t be so problematic if Arlo were better company, but in their determination to make sure we understand that Arlo, born at a small size, is naturally timid, the filmmakers keep him scared of everything far into the running time. Arlo’s reactions are so consistent, and often irrational, that by the time he encounters something worthy of fear, we wish he’d have a different response just to change things up. A human actor might be able to add something to these scenes, but even with big, expressive CGI eyes, the digital Apatosaurus just isn’t able to bring variety to a number of similar sequences.

The movie also relies on flashbacks to things we’ve already seen to make sure we can follow along. In a mystery, this would make sense, but do we really need to be reminded that already alarmed Arlo, who almost drowned and suffered a great loss in a flood, is afraid of the raging river?

Then there’s the look and texture of the dinosaurs, which seems meant to be cuddly with the good guys. It looks neither like actual reptile skin nor something that would be fun to touch, with a result that is not entirely artificial, but not fully lifelike, either. The artistry involved in putting the CGI characters in realistic backgrounds is commendable.

Young children in the audience of THE GOOD DINOSAUR seemed to appreciate the film, so they may be its most enthusiastic viewers. Parents should be aware there’s a BAMBI-like tragedy early on, and some rather scary pterodactyls and velociraptors, but anyone old enough to watch JURASSIC PARK (and even some who aren’t) should be able to handle this.

Grown-ups may actually have a better time with SANJAY’S SUPER TEAM, the Pixar short that precedes THE GOOD DINOSAUR in theatres. Made by Sanjay Patel, SUPER TEAM is a charming, even thrilling wordless depiction of how a young boy’s imagination forges a bond with his religious father.

As far as THE GOOD DINOSAUR, it has a few flashes of fun, as with a Triceratops (voiced by director Peter Sohn, who also worked on the story) who has his own community, and some moments of real beauty, one of which is prominently featured in the advertising. Still, it’s not the kind of surprising, imaginative fare we normally associate with Pixar.