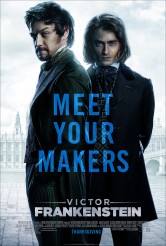 A new, engaging take on the familiar tale 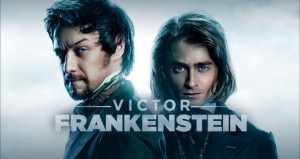 “You all know the story,” Igor (Daniel Radcliffe) observes in voiceover just as VICTOR FRANKENSTEIN begins. Well, in this version, scripted by Max Landis and directed by Paul McGuigan, we do and we don’t. As promised, there’s an eponymous mad genius (James McAvoy) and eventually a lightning storm and a monster.

However, this is the story told from Igor’s point of view, and it’s very much reimagined. For starters, Igor is something of a genius himself, though his life circumstances haven’t let him do very much with this until Victor rescues the previously nameless circus clown. Igor, as Victor dubs him (for reasons that become clear as the film progresses), has been essentially in captivity, though he’s learned to read, draw and knows human anatomy well enough to save a life. Victor sees in Igor the ideal lab assistant and a kindred spirit; Igor sees in Victor a savior.

Igor’s devotion to Victor therefore makes absolute sense. Victor diagnoses and remedies Igor’s previously crippling condition and then makes it possible for the erstwhile circus captive to be received as a gentleman in polite society. The twist to this “My Fair Laddie” scenario is that Victor isn’t smug about it – he’s deliriously happy to have someone who understands his work. For Igor, of course, it’s transformative. Meanwhile and always, there’s Victor’s grand project, which is dangerous both on its own and because it draws the increasingly hostile attention of a devoutly religious Scotland Yard detective (Andrew Scott).

The audience is well aware of the irony that, while Victor strives to scientifically create new life out of death, he’s actually achieving this with Igor, who goes from a terrified, oppressed creature to a man with opinions and ethics of his own. The filmmakers allow this to flow naturally and don’t really force anything, though Igor’s growing relationship with a beautiful young woman (Jessica Brown Findlay) seems to be there primarily from keeping the bond between the two male protagonists from appearing too romantic (and to give costume designer Jany Temime a reason to provide some stunning gowns).

Landis’ writing and McGuigan’s direction create a mood of adventure, mischief and delight, along with the expected (and provided) dread and foreboding. McAvoy’s manic/depressive Victor actually seems much more temperamentally suited to bucking convention and trying to follow the dictates of his inner self than the more familiar scientist, and the actor is great company in the role. Radcliffe is soulful and charming as Igor; we believe his scientific acumen and we’re pleased to see him blossom. Scott (Moriarty on TV’s SHERLOCK) radiates certainty, the hero of his own tale.

Too many mainstream movies seem to have been put together like Frankenstein’s monster, with pieces stitched together from whatever worked last time. VICTOR FRANKENSTEIN is refreshingly character-driven and has a sense of joy in its storytelling that makes this great-grandfather of the corpse resurrection genre seem fresh and alive