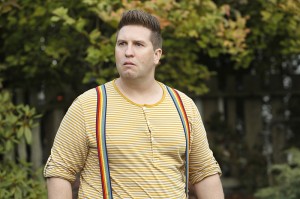 SUPERNATURAL normally doesn’t do heartwarming (it’s much more inclined toward heart-ripping, in the literal sense). However, in the Season 11 episode “Just My Imagination,” the show goes surprisingly warm and fuzzy, with charming results.

We see a little girl having a tea party in her well-appointed room. The child, but not her parents, can see her companion Sparkle, a unicorn man with very good manners who encourages his friend to oblige her parents. When the unicorn man is alone, he is stabbed to death by an assailant.

The next morning, Sam (Jared Padalecki) wakes up to find the kitchen filled with goodies a child might like, including marshmallow Nachos. This is courtesy of Sully (Nate Torrence), a big, goofy, rainbow-suspenders-wearing fellow who was Sam’s “imaginary” childhood friend. Sully has come to Sam and Dean (Jensen Ackles) for help in solving Sparkle’s murder.

Once Sam is able to accept the fact that Sully actually exists – he’s a creature called a Xana, a species that exists to help lonely human children – and Dean is able to control his instinct to kill the supernatural being, the search is on for Sparkle’s killer, who also knifes a mermaid Xana and tries but fails to kill the mermaid’s Xana boyfriend.

Sam reflects on all the times Sully was there for him when Dad and Dean were off monster-hunting without him. Sully always encouraged young Sam (played by DylanKingwell) to believe in himself and to believe he had choices in life. However, the first time Dad decreed that Sam could join a hunt, the little boy decided Sully was imaginary and left him behind.

Sully says that he’s more in management, rather than in the field these days. When the (human) murderer is found, we learn why. After Sam ditched Sully, Sully went on to befriend twin little girls. When one child died in a traffic accident during a game of tag, Sully panicked and abandoned the surviving twin. Reese (Anja Savcic) is now an angry young woman who wants revenge on Sully. At first, Reese claims it’s because Sully caused her twin’s death, even though it was clearly an accident, but it’s really because she felt abandoned by him. Reese has been killing Sully’s friends (a witch’s spell allows her to see Xana when most adults can’t). Sully apologizes to Reese for leaving her when she needed him most and is willing to let her kill him if it will make it feel better – a Xana always will do what’s best for his or her child, no matter what. Dean, who has been Mr. Skeptic, stands up for Sully and Reese finally forgives her not-so-imaginary friend.

Dean thanks Sully for being there for young Sam all the times that Dean wasn’t.

In the midst of all this, Sam and Sully have a conversation about Sam’s visions of the cage in Hell. Sully knows about the Darkness, and is proud that Sam has grown up to be a hero. He counsels Sam to do the right thing.

Later, Sam insists to Dean that they talk about the cage. Dean of course doesn’t want Sam to go back there to get Lucifer’s advice on how to stop the Darkness. Sam is open to other suggestions; Dean doesn’t have any.

For those who’ve seen enough of both shows to grasp the tonal difference, “Just My Imagination” feels a bit more like GRIMM than SUPERNATURAL for most of its running time. The humor, even when it’s gross (the grownup who can’t see Sparkle’s corpse and consequently smears his sparkly blood all over her face, to the horror of Sully, Sam and Dean), tends to be lighter and less ironic than usual. Sully is that extra-rare being in the SUPERNATURALuniverse, an entity that is just as good-hearted and actually helpful as he initially seems. Torrence embodies the goofy, appreciative big brother that most lonely kids would love to have, and the way the Xanas operate makes as much sense as anything else. Jenny Klein’s teleplay is not cloying, but it has a sense of gentle optimism that is handled just right in this context.

Richard Speight Jr., who recurs on SUPERNATURAL as Trickster/Loki/Gabriel, directs “Just My Imagination” with a buoyant sensibility. It’s fun, funny, provides some credible back story for Sam and serves as a breather before what looks like some heavy drama hits.