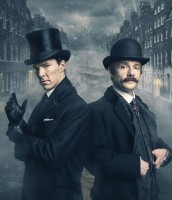 ©2015 PBS/Robert Viglasky/Hartswood Films and BBC One and MASTERPIECE
Martin Freeman and Benedict Cumberbatch in SHERLOCK: THE ABOMINABLE BRIDE
Interviews 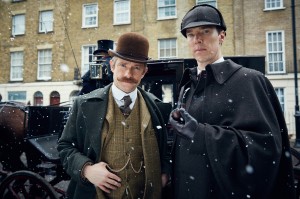 Martin Freeman and Benedict Cumberbatch in SHERLOCK: THE ABOMINABLE BRIDE | ©2015 PBS/Robert Viglasky/Hartswood Films and BBC One and MASTERPIECE

SHERLOCK, the present-day adaptation by Steven Moffat and Mark Gatiss of Arthur Conan Doyle’s classic Victorian-era character, is doing something very different for New Year’s. On Friday, January 1, PBS will present SHERLOCK: THE ABOMINABLE BRIDE, which sees Benedict Cumberbatch’s Holmes and Martin Freeman’s Watson actually existing and solving a case in the late nineteenth century. It is, as the English are wont to say, a one-off.

Sue Vertue, SHERLOCK’s series producer (who is also married to Moffat), has previously produced/executive produced other British series, including THE CUP, SUPERNOVA, CARRIE & BARRY and COUPLING. However, she says there is something special for her about SHERLOCK.

ASSIGNMENT X: Were you a Sherlock Holmes fan before you started producing SHERLOCK?

SUE VERTUE: No, I wasn’t. Isn’t that awful? Funnily enough, I still haven’t read that many stories. We keep it that way now, because they know the show so well, it’s quite good that I can actually look at is from a viewer [standpoint] and say, “I don’t understand that,” or, “Why are they saying ‘seven percent solution?’ So I can see it more as a fan.

AX: The New Year’s SHERLOCK special is unusual in that it’s a single episode, but your seasons are normally three episodes each. Would you be happier if you made fewer episodes and got to concentrate more on each one, or if there were some more money and you got to make more episodes?

VERTUE: It feels about right, and actually, the money’s not the [issue]. Even if we had all the money in the world, we still couldn’t make more than we’re making now, because of availabilities, really. I like it. I like all the things that go with it. I like looking at the merchandise that we can do and the books we can do. It’s varied.

AX: The British government keeps threatening to cut the BBC’s funding.BBC co-produces the series with PBS’ Masterpiece Theatre. If the overall BBC funding was cut, would that affect production on SHERLOCK?

VERTUE: There’d be less money, they’d have to make cuts in budget. I think the problem is, I think the BBC is about as tight as they can be on budgets now, so I don’t know where the cuts are going to come from. It’s frightening.

AX: Are there things that you’re a fan of that you’re saying to Steven Moffat and Mark Gatiss, “Can you write about this so I can produce it?” or are you producing shows with other writers?

VERTUE: I produce things with other writers, yeah. I mean, I love working with these boys and anything that I’d like to do, we just have to wait for a bit, really, because there’s not that much time in the schedule.

AX: So SHERLOCK is your primary focus at this point?

VERTUE: It is at the moment. I mean, I’ve got lots of other things in development, some dramas and things at the BBC and stuff, but it can keep you going quite a lot of the year, SHERLOCK, with all the ancillary things that go with it.

AX: What would your ideal project be?

AX: What would you most like people to know about the SHERLOCK special, “The Abominable Bride”?

VERTUE: I think it’s fantastic. It’s an adventure and it’s Victorian and it’s very different, I think, but it’s still very much our show. It’s got the pace and the humor. I think it’s special.

This interview was conducted during PBS’ portion of the most recent Television Critics Association press tour.