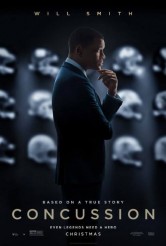 An eye-opening look at a major downside of football

There were some rumors circulating that the National Football League had persuaded Sony Pictures to tone down the criticism of the NFL in CONCUSSION. If this is true, the imagination staggers at what the film was like earlier, because what’s onscreen here is pretty damning. 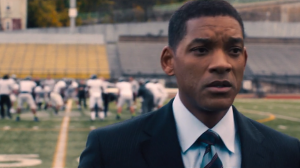 Will Smith in CONCUSSION | ©2015 Columbia Pictures

Based on a true story, CONCUSSION begins in 2002 Philadelphia, where onetime pro football great Mike Webster (played by David Morse) is living in his car, clearly a victim of mental illness. When Webster dies, the cause of death is listed as heart attack. Forensic pathologist Dr. Bennet Omalu (Will Smith), who performs the autopsy, is puzzled by why a local hero should wind up in Webster’s straits and examines the man’s brain for signs of dementia. Omalu is so curious that he winds up funding his own research and, after studying tissue samples, concludes that Webster suffered from what will come to be known as Chronic Traumatic Encephalopathy, or CTE, a condition caused from being repeatedly hit in the head during football games.

Although Omalu earns the respect of medical colleagues, he has no idea of the forces he is confronting. An immigrant from Nigeria with eight college degrees and a great belief in both the American Dream and the Catholic version of God, one subject Omalu cheerfully knows nothing about is football. He thinks the NFL will be happy to hear about his findings and will want to work with him to “fix” the problem. Omalu’s friends and colleagues try to tell him that the NFL probably will react with something less than delight, but this in no way prepares the doctor for what happens next.

CONCUSSION is structured like a thriller, equal parts medical and whistle-blower, with a sense of urgency that doesn’t need to be inflated – the real-life events are well-known enough to be both familiar and shocking when they are presented in this context.

Director/writer Peter Landesman, inspired by Jeanne Marie Laskas’ GQ Magazine article “Brain Games,” paints an admiring portrait of Omalu, but doesn’t go overboard. Smith does an impressive job of disappearing into the mostly optimistic, compassionate man who at first cannot understand why he’s being attacked with such vitriol.

Although the NFL itself is not depicted with great kindness – there’s presumably a reason that Luke Wilson plays commissioner Roger Goodell here, rather than having Goodell appear in stock footage – Landesman does take care to demonstrate that there is another side to the argument. Football itself is shown to have grace, beauty and an immediacy that is intoxicating. One of Omalu’s chief supporters, Dr. Cyril Wecht (Albert Brooks, gentle and wry here), describes the game as something that can be as revelatory as Shakespeare.

In this respect, among others, CONCUSSION differs from another major whistle-blower film, THE INSIDER, 1999’s Big Tobacco drama. Nobody (even smokers) has anything nice to say about cigarettes, but football is beloved, and Landesman makes solid efforts to reflect this.

There are also some cool facts to be learned in CONCUSSION – if you’ve been aching to know how woodpeckers do what they do without brain trauma, here’s the explanation – and the requisite romance between Omalu and fellow African immigrant Prema Mutiso (Gugu Mbatha-Raw) is agreeable enough.

If there’s a complaint to be made here, it’s that CONCUSSION is formulaic. It has so much factual drama going for it that there’s no real need to shake things up in terms of presentation or expectation, and consequently, there’s not much attempt to do so.

Still, CONCUSSION’s heart shows most clearly not even in the scenes involving Omalu’s quest, but rather in those showing the men suffering from brain damage. From Morse’s ruined Webster to the actions taken by Dave Duerson (another real-life NFL player, portrayed by Adewale Akinnuoye-Agbaje), it’s hard to deny the sentiments the film seeks to elicit.